Williams: It Wasn’t the Best Day 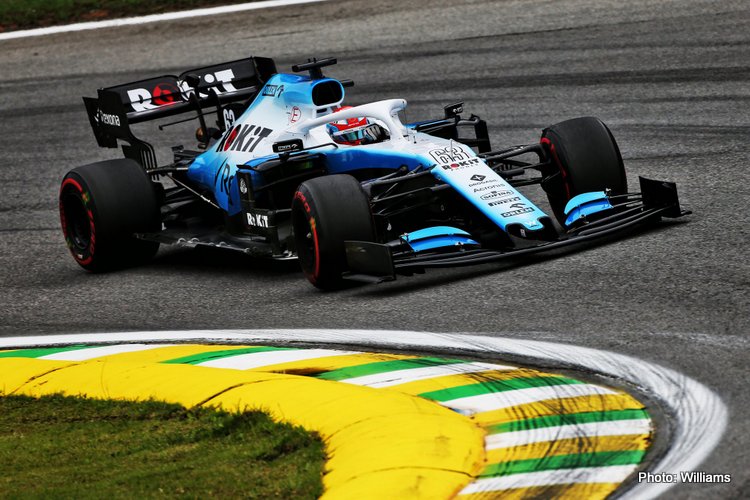 Williams report from Friday at the Brazilian Grand Prix, round 20 of the 2019 FIA Formula 1 World Championship.

Dave Robson, Senior Race Engineer: The heavy overnight rain was supplemented by further showers before and during FP1. This is quite common in Sao Paulo in November and we had a suitable programme prepared, which we would have executed successfully but for the red flag at the end of the session. George and Nicholas drove very well in the wet conditions, which enabled us to gain a lot of valuable data on a range of test items.

By the start of FP2 the track had dried but it remained very cold, and while the track drainage had been effective in clearing the water, some of the kerbs remained wet. Having missed FP1, we were keen for Robert to maximise his track time in FP2 but, unfortunately, he put a wheel in a wet patch that had been created by a car ahead running through the wet kerbs at T3. This damaged the car and stopped his session before he had any opportunity to do any meaningful running. We will assess the extent of the damage tonight and rebuild the car accordingly.

George had a productive FP2 session, but the cold conditions made tyre warm-up and management especially difficult. Fortunately, the forecast is for warmer conditions for the rest of the weekend, and this will probably change the tyre behaviour significantly. On this basis, we can expect a relatively busy FP3 session tomorrow as everyone finalises their tyre preparation in the warmer conditions.

George Russell: It wasn’t the best day. We were struggling with the temperature to get the tyres working and it was very tricky out there. If we get the tyres in the window, I think the lap time will improve quite dramatically. Hopefully with higher temperatures and a bit more grip, it should come towards us. We’ve definitely got work to do tonight and let’s see what we can do for tomorrow.

Robert Kubica: I was on my first lap around Interlagos, I lost the car in a nasty way in-between turns two and three. Initially I did not understand the accident. However, once I reviewed it, I understood that a Haas had gone off the track a few seconds ahead of me, which pulled quite a lot of water onto the track. It was my first lap on the hard tyre, so with all of these factors, I ended up in the wall. It was unfortunate, but this is motorsport and it can be frustrating at times.

Nicholas Latifi: It was my first time driving a Formula One car in wet conditions, so it was a new experience for me. I was hoping it wouldn’t rain as much as it did, but I was very happy to go out and get five or six good pushing laps. Overall, it was a very valuable session for me, I got the car back in one piece, so I felt I did a good job.