Haas: It’s Too Early to Jump to a Conclusion 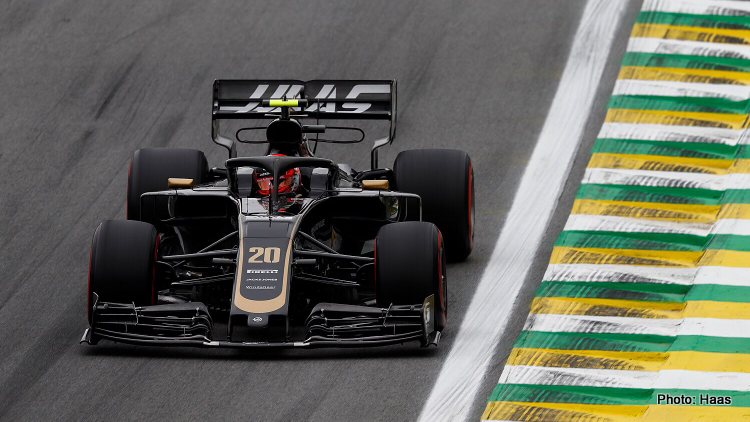 Haas report from Friday at the Brazilian Grand Prix, round 20 of the 2019 FIA Formula 1 World Championship.

The 20th and penultimate round of the 2019 FIA Formula One World Championship began with practice Friday at Autódromo José Carlos Pace in São Paulo as teams prepared for Sunday’s Brazilian Grand Prix.

Two 90-minute sessions – FP1 and FP2 – on the 4.309-kilometer (2.677-mile), 15-turn circuit ran under mixed conditions, showers impacted the morning, but conditions cleared to merely overcast in the afternoon.

Rain and the declaration of a wet track saw Grosjean and Magnussen limited to installation laps only in the first half of FP1 – both drivers utilizing Pirelli’s Cinturato Blue wet weather compound. The remaining 45-minutes brought improved circuit conditions, with stints on intermediate tires finally delivering track action for the fans and lap times on the board.

Magnussen banked an eight-lap run on the inters with a best time of 1:19.247 placing him 12th overall. Grosjean was one of four drivers not to record a timed lap in the session, the others being Sergio Perez, Max Verstappen and Lewis Hamilton. An attempt to run on the P Zero Red soft rubber was thwarted for both Haas F1 drivers shortly after they had exited the garage in the closing minutes – an off involving Alexander Albon at Turn 12 brought out the red flag to end the session prematurely.

Presented with a dry track in the afternoon, Grosjean and Magnussen commenced proceedings in FP2 with a baseline run on the P Zero Yellow medium tires. They switched to soft tires to clock their fastest laps of the day with qualifying simulations. Magnussen ended the session sixth overall having set a best time of 1:10.143, meanwhile Grosjean’s 1:10.504 lap placed him 16th on the timesheets. They bolstered their respective lap tallies with high-fuel, race-simulation runs to bring Friday’s track activities to a close.

“It was very close today, very exciting. Kevin (Magnussen) was P6 and he’s fourth and a half tenths ahead of me and I’m in P16. We had a small issue on the car in FP2 unfortunately, we need to resolve that for tomorrow. We know what it is and we’re going to sort that out. Hopefully the car is better tomorrow. The qualifying pace was good today though, the race pace was alright. We’re expecting the track temperature to be a lot hotter on Sunday and that will change the picture a lot. We just need to make sure we work on that and don’t get surprised by the change of track temperature. Conditions were in our favor today, it’s going to change, but we’re going to try as hard as we can.”

“I think we had a pretty decent Friday – we were P6 on low fuel in FP2. That’s almost the best we’ve been all year, at least since Monaco, I think. That’s nice. It’s been very cold today and it’s not going to be cold on Sunday. The cold conditions help us, so, that’s a bit of a bummer. I hope the cloud cover can stay and we can have some cool track temperatures as it definitely helps us. We’ll take it as it comes though. The whole of the midfield is within half a second, it’s so tight, I’m P6 and there’s just four tenths down to P16.”

“FP1 today, there wasn’t a lot learned. We went out on the intermediates with Kevin (Magnussen), we ran around a little bit, but nothing really learned as I said. FP2 wasn’t a bad session for us. The temperature worked in our favor here today, it was pretty cold. It’s too early to jump to a conclusion because Kevin had quite a good time, Romain (Grosjean) struggled a little bit more to find the right balance of the car. Tomorrow is a different day – hopefully the track doesn’t get a lot hotter, maybe then we can have a good qualifying.”