Bottas: I have a plan to beat Lewis next year 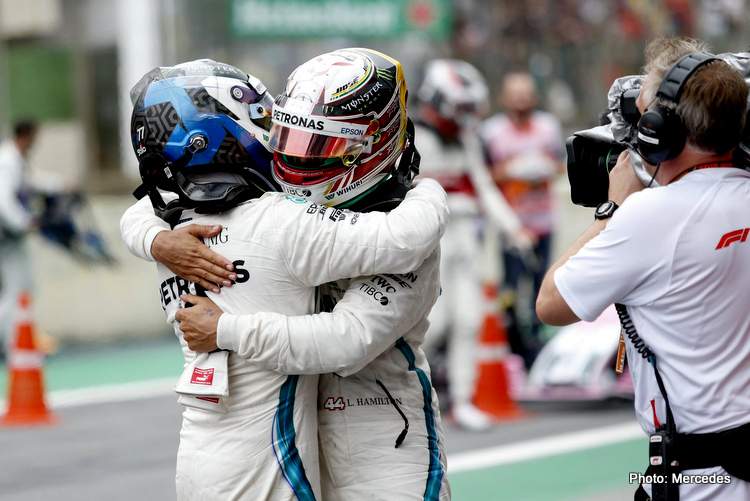 Mercedes driver Valtteri Bottas says he has a plan for how to beat his illustrious teammate Lewis Hamilton to the Formula 1 world championship title next year, but he is keeping his plans under wraps.

The Finn told reporters on Thursday that he was tired of people asking whether he was going to copy retired predecessor Nico Rosberg and engage more in mind games to get under Hamilton’s skin.

“Very honestly, I’m already bored about that question,” Bottas said at the Brazilian Grand Prix, the penultimate race of the season.

“Every driver is individual. I’m me, I’m not Nico. For sure I always have plans, finding the different ways to how I want to achieve my goal. I have a plan for next year, I´m not really willing to share it.”

Hamilton wrapped up his sixth title in Texas this month with two races to spare and the Briton has won 10 grands prix to Bottas’s four this year.

Bottas is sure to end the season as runner-up, his best performance in the three campaigns since he replaced 2016 champion Rosberg.

“I have always preferred to do the talking on track. If I can keep up my performance and focus all the energy that I have into my own performance, I think that’s going to be the best bet for me,” Bottas added.

“If I can then perform at the level I want to, normally that tends to upset the other side of the garage a little bit. I know being on the other side as well that it can lead you to mistakes and so on.”

Bottas failed to win a race last year, the only driver from the top three teams to draw a blank, and ended up fifth overall.

The season before, he won three races and finished third behind champion Hamilton and Ferrari’s Sebastian Vettel. Mercedes have now won both titles for an unprecedented six successive seasons.

“It´s been a much better season from my side than last year so it´s been nice to contribute properly to the achievements we´ve got as a team,” said Bottas. “But for sure (it’s) still not a season that I´m aiming for. I need a bit more consistency, fewer mistakes.”