Ferrari: We intend to finish the season on a high note 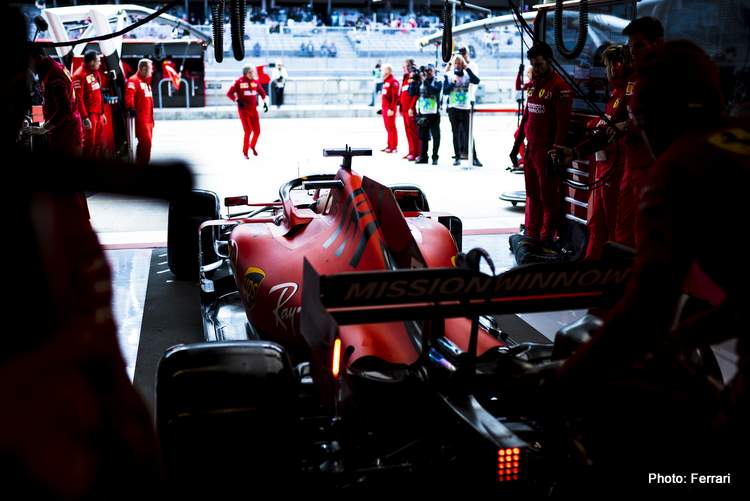 Sunday’s race at Autodromo Carlos Pace will be the 47th edition of the Brazilian Grand Prix, a race which first appeared on the Formula 1 World Championship calendar in 1973 and has been a permanent fixture ever since.

It has been held at just two circuits, Jacarepaguà and its current home, Interlagos. Scuderia Ferrari has won this race eleven times.

Lauda after the Brazilians. The first three editions were run at Interlagos, on a track that was almost 8 kilometres in length and they were all won by Brazilians: Emerson Fittipaldi won the first two with the third going to Carlos Pace, after whom the circuit is named.

It fell to Ferrari and Niki Lauda to break the homegrown stranglehold in 1976, with the first of a hat trick of wins for the Scuderia in this race.

The following year, victory went to Argentina’s Carlos Reutemann, who to this day considers that race in 1977 as one of the toughest of his career, given the suffocating heat that hung over the circuit that day in the Sao Paulo suburb of Interlagos.

In Rio. Reutemann’s 1978 win came at the new circuit built just outside Rio de Janeiro, called Jacarepaguà, the name meaning “crocodile swamp”. Interlagos was undergoing a major overhaul in time for the 1979 race.

However, the track was still dangerous and very bumpy and after the 1980 race, the Grand Prix moved back to Jacarepaguà up to 1989, the year in which Nigel Mansell won for Ferrari.

The result was also a moment of historic importance, as it was the first time a Formula 1 race was won by a car, the F1-89, fitted with a semi-automatic gearbox with paddles on the steering wheel. It was the first race of the season and the perfect debut with Ferrari for Mansell.

Return to Interlagos. In the meantime, Interlagos was completely rebuilt, with the track length reduced by almost half, from 7.8 kms to 4.3. The pit complex was rebuilt and safety standards were greatly improved.

Scuderia Ferrari kicked off proceedings in fine style, with Alain Prost winning in the F1-90 on what was home turf for his main title rival, Ayrton Senna, the unforgettable star who was a hero for many drivers, including Sebastian Vettel and Charles Leclerc. At that time, Senna had never managed to win his home race, but he went on to do so in 1991 and 1993.

The Schumacher era. Scuderia Ferrari won again in 2000, with Michael Schumacher, the dominant force in those days and he did it again two years later in a race featuring an early thrilling duel between the German and his then rival Juan Pablo Montoya.

Michael last drove a Ferrari at Interlagos in 2006. In the race, he got a puncture and then charged back up the order, making up almost a lap on team-mate Felipe Massa, who went on to win, but Michael stole the show by finishing fourth.

The title fights. The next two years produced absolutely thrilling races, which had the crowd on the edge of their seats, primarily because the Drivers’ title was decided in each case. In 2007, Kimi Raikkonen arrived at Interlagos lying third in the classification but left with the title in his pocket.

Just about everything happened that afternoon: championship leader Lewis Hamilton had a problem that meant he was a lap down, while Kimi and Massa produced perfect team-work for the Finn to win the race and the championship.

The following year, Felipe was in the running for the title on home turf, with Hamilton once again the rival. Massa was way out in front, but Hamilton was still in a good enough position to take the crown. In the closing stages, it began to rain and Hamilton dropped down to sixth. Felipe won the race and for just over 30 seconds, he was world champion.

However, on the very last corner of the very last lap, Hamilton managed to pass Timo Glock in the Toyota to take the fifth place that was enough to win the title by a single point. Scuderia Ferrari was at least able to celebrate winning the Constructors’ championship. Brazil was also the scene of the 2012 title decider, when Sebastian Vettel, then with Red Bull was up against Fernando Alonso in the Ferrari.

Vettel spun shortly after the start and was hit by Bruno Senna in the Williams. However, his car was only slightly damaged and the German was able to fight his way back up the order into a position good enough to be champion, even though the Spaniard finished second.

Number 11. Scuderia Ferrari’s most recent win in the Brazilian Grand Prix came in 2017, courtesy of Sebastian Vettel who had to fight hard against Valtteri Bottas in the Mercedes. Last year, the German finished sixth, a few seconds ahead of Charles Leclerc in the Sauber-Ferrari.

90 Years. This weekend, Saturday to be precise, marks the 90th anniversary of the start of Scuderia Ferrari. On 16th November 1929, the team received the necessary legal authorisation to operate. The first race for the brand new team was the 1930 Mille Miglia. To celebrate this landmark along with its fans, Scuderia Ferrari is launching various initiatives on its social networks and web platforms.

Sebastian Vettel: “Racing in Brazil, in Sao Paulo, I think in a nutshell, anything can happen. I don’t know why, but there is something about this place and this circuit. Every year, something crazy happens and, if it doesn’t you can be sure it will the following year.

“This is another track that has suited us well in the past and treated us well over the last couple of years. I remember we had good pace there and Kimi was on the podium last year, while two years ago we won the race. I think overall it’s been a good hunting ground for us and hopefully it will be like that again this weekend.

“Certainly, in terms of atmosphere, it’s very special. Brazilians are one of the loudest crowds on the calendar: you can actually hear them when you are in the car and it feels as though they are in the cockpit with you.”

Charles Leclerc: “Not only are the people in Brazil extremely passionate about our sport, but it was also the home of Ayrton Senna, who is the driver I have probably most looked up to. He was very talented, just special, and this GP will always remind us of his legacy.

“The circuit is really exciting to drive on. It’s a short lap but still features lots of different corner combinations paired with straights. I think the layout has changed quite a bit over the past decades until it reached its current shape. When I was younger, I actually always used to select it on my Playstation, so I’ve always been very fond of it!

“The weather in Sao Paulo can be changeable, which means that the conditions on track can vary from day to day and pose unexpected challenges to all teams, mixing things up.”

Mattia Binotto, Team Principal: “We come to the penultimate round of the season after a frustrating race in Austin, where we were unable to deliver the results we felt we could have done.

“On Saturday, we missed out on taking a historic seventh consecutive pole by just one-hundredth of a second with Sebastian, although we can take comfort from the fact it showed the raw performance was there.

“On Sunday, Charles’ pace in the first stint was poor although his car performance level was back to normal after the first pit stop. So we will put all this behind us now and look ahead to Brazil and a fresh start.

“Charles will get a new Power Unit there, as his was damaged on Saturday in Austin, which meant he had to use a previously used and less powerful version for the rest of the weekend.

“Fitting a new PU means taking a grid-penalty in Sao Paulo, but we should be back to our normal performance level and show some fighting spirit to finish the season on a high note.

“That will be important in order to confirm we are making progress with our car and to take some of that momentum into the winter work. I know that our drivers and the whole team are fully focused on that.”