Penske becomes Indy boss in sale of the century 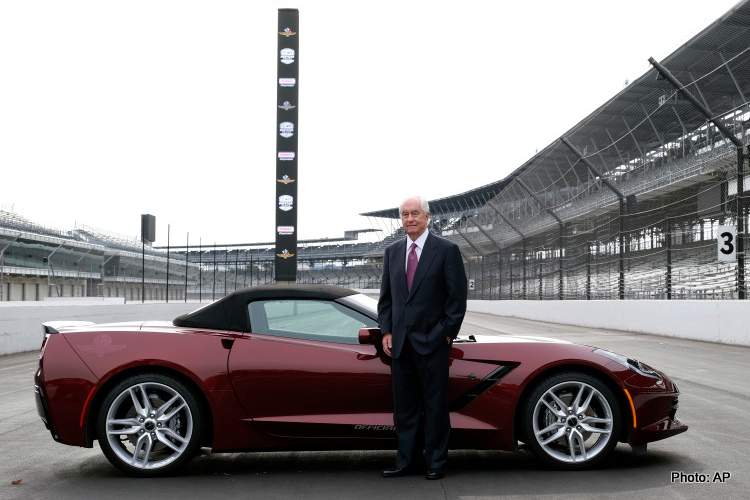 Roger Penske spent part of Tuesday walking Indianapolis Motor Speedway, using a cool, sunny day to look over the historic venue that will soon be his.

There is work to be done at the speedway, lots of work before it can be the entertainment mecca he envisions. But more than that, there is a legacy to worry about — and not just his report AP correspondent Jenna Fryer.

The hulking grey structure had been in the Hulman family since Tony Hulman purchased it in 1945, and generations over seven decades since have poured everything into the speedway to uphold its status as a beloved slice of Americana, a place where championships are earned every Memorial Day weekend and heartbreak, even death, is familiar.

Hulman’s grandson, Tony George, now runs the showcase Indianapolis 500 race, the sprawling speedway and all things racing that the family treasures. After painstaking research, the family decided the time had come to give it all up — and George was uneasy turning it over to a corporation or conglomerate that might very well ignore 110 years of history and tradition.

He sought out the only person he knew who not only shared his love and respect for the speedway but had the resources and unwavering desire to preserve the Indy 500 as a global spectacle:

Roger Penske, the billionaire businessman and racing enthusiast with a long history of excellence in motorsports.

Penske was approached by George at the Sept. 22 IndyCar season finale and asked if he was willing to discuss future “stewardship” of the speedway, the Indy 500 and the open-wheel series that has enjoyed a recent uptick in popularity.

In a stunning deal that took only six weeks to work out, Hulman & Co. announced Monday it was selling its racing portfolio to the man with a record 18 Indy 500 victories. Penske, who last month received the Presidential Medal of Freedom from President Donald Trump, will be the official owner by January.

But first, that walk.

The 82-year-old Penske knows IMS better than most, but he wanted to get a closer look at what is likely the crowning achievement of his lifelong devotion to motorsports.

“This demonstrates if you have something in your mind and your DNA, that if you work on it, and you are committed and you’ve got a good team around you, you can come to an intersection like this where the Hulman-George family would come to me — I didn’t solicit them — and say, ‘There’s an opportunity here,'” Penske said in an interview with The Associated Press.

“When you walk around here and stand out there with no people, you have to pinch yourself to understand what has really happened. To think about how our family, all of our family, hopefully we’ll be here 70 years, I won’t obviously, but we’ll have the same impact and give the same support,” he said.

“We support the Hoosiers in the state, the governor, the city, the county, the region and certainly the town of Speedway. We want to make a difference. That means more than the money or more than anything else. We give ourselves our own report card and it’s not always about the bottom line.

“It’s about we have done something to create a brand around the world and the fact we’ve been able to make this iconic race continue in a way that can’t be tarnished,” added Penske.

How motorsport’s sale of the century came about…

When matriarch Mari Hulman George, daughter of Tony Hulman, died last November her four children began to divest the family portfolio. First was the $80-million sale of baking soda company Clabber Girl in May, followed by a search for a buyer for the racing properties.

Penske and Hulman declined to discuss details of the transaction, though Mark Miles, CEO of Hulman & Co., confirmed to The AP there was at least one interested party before Penske was sought out. Two people with knowledge of the sale, speaking to AP on condition of anonymity because the details are intended to be private, said investment bank Allen & Co. was tasked with finding either a buyer or strategic partner and connected the family with Liberty Global, a communications company and owner of the Formula E racing series.

Liberty Global was an unknown to George and he was uncomfortable, even as his three sisters encouraged the sale. As a family, they decided to see what Penske thought and “The Captain” was certain he wanted the reigns.

“In the last few months it felt like the family was reaching a place where they were thinking about an exit, and then there was Roger and that was it,” Miles told AP. “It was hugely important to them that they found someone they knew they could entrust with what they think of as their baby.”

Industry insiders estimate Penske got it all for roughly $300 million, plus promised additional capital improvements to the speedway. Penske and Miles declined repeated requests from AP to discuss financials.

Penske began talks on the purchase the day after Josef Newgarden gave him a 15th IndyCar title and signed a nondisclosure agreement four days after the season finale, on a Thursday night, Miles said. When the Hulman group arrived at Penske’s offices in Detroit for a clandestine meeting that Saturday morning, Miles said Penske was already armed with “thousands of pages of due diligence.”

The groups usually met on Saturday mornings or Sunday evenings and Penske kept the deal under wraps in an industry where almost everything is an open secret. He deliberately had a news advisory sent at 8 a.m. Eastern on Monday in an effort to catch everyone by surprise.

As is his buttoned-up style, Penske controlled the news until he was ready and he told AP it was his most furtive move since showing up at the 1994 Indianapolis 500 with a controversial pushrod Mercedes-Benz engine designed and developed for that single race.

A conflict of interest?

Penske’s operation is the gold standard of motorsports and his 18 Indy 500 victories dwarf the competition. He called this year’s race for Helio Castroneves and spends the regular season as race strategist for Will Power.

To avoid appearances of a conflict of interest, Penske said he will step down from the pit stand next season. He told AP he will begin watching races the way he watches his NASCAR teams — from a luxury suite with scanners to listen to all team communications.

He’s among a handful of team owners who have angered fans by suggesting that IndyCar’s regular participants should be guaranteed spots in the Indy 500, but said it is far too early to talk any potential changes. Penske is revered for his integrity and professionalism, and rival team owners and drivers seemed to be the least concerned about potential conflicts after the sale was announced.

“If you know anything about Mr. Penske, it’s that he holds his work to the highest standards,” said driver Graham Rahal.

Added four-time Indy 500 winner A.J. Foyt, a current team owner and one of the first people Penske called after announcing the sale, “The one thing about Roger is that when he goes and does something, he does it first class.”

What’s planned for the future?

Penske plans to keep the current executive team of both the speedway and IndyCar. He had a full day of meetings planned Tuesday. He will put his own board in place, and Tony George will likely have a role in some fashion: Penske offered and George, who fought back tears at the news conference to discuss the sale, said he would accept.

Penske will likely include many of his top lieutenants from the Penske Corp. in the process, and his son, Greg, as well as Bud Denker, a longtime Penske executive, were among a small group that had a Tuesday morning breakfast with IMS leadership in a cafe near the speedway.

Penske wants more activity at the speedway, and is open to bringing Formula One back to the track, as well as sports cars, a 24-hour endurance race and an extended deal with NASCAR. The stock car series first raced at The Brickyard in 1994 in a controversial break from tradition for the speedway. The race has lost its prestige and next year gets an awkward date on the July 4 weekend, just six weeks after the Indianapolis 500.

Penske has already had talks with NASCAR chairman Jim France and made it clear he wants NASCAR at the speedway. He likes the two races running less than two months apart on patriotic weekends.

“I think the combination of Memorial Day weekend and also July Fourth gives us the ability to support the men and women of the armed forces and first responders and we can take that to the next level,” Penske told AP. “We can really do something special with this.”

The IndyCar Series itself is not a moneymaker and is propped by the Indy 500 and the speedway, which receives a sizeable payout from NASCAR’s television package. Penske has very firm goals for shoring up the security of the series and speedway.

“I want to keep the number of races very realistic, the balance of 15 to 17 is very key,” Penske told AP. “We have to be relevant in the markets we are, it can’t just be just another race coming to town. We’ve always got ideas and are already kicking some things around. The series is not broken.

“We need to enhance it. We need more revenue. Not only for the league, but the teams, and we’ve got to make sure the product remains relevant to what people are seeing in their cars. All of these things need to be taken into consideration,” added the man known as ‘The Captain’ in racing circles.