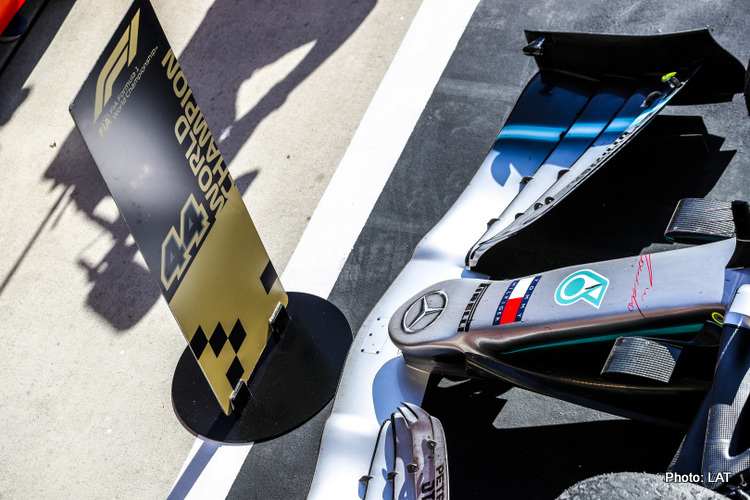 Between Lewis Hamilton sealing his sixth title, the release of the 2021 regs, and Max Verstappen’s war of words with Ferrari, it certainly hasn’t been an uneventful week in the F1 world.

2021 Regs Revealed: It’s been years of speculation at this point, but finally, the regulations for the ‘new F1’ in 2021 are here.

Overall, the reception seems to have been largely positive – although the drivers don’t seem that enraptured with the actual cars – but at least for me personally, this graphic is really all that matters. If those numbers are anywhere close to accurate, we’ll have a more closely fought, and therefore consistently exciting formula – hopefully with the added bonus that we can finally get rid of DRS.

In terms of the budget cap, I’m still not sold. As Mattia Binotto pointed out, the 2021 cars won’t be subject to the limitations, and that means – at least in the early running – the biggest spenders should continue to dominate the front of the grid. That said, maybe Renault and McLaren could quickly join the party, but I wouldn’t expect a Haas or Williams to do so – especially as unlike other sports, the $175 million cap doesn’t just work as a maximum that teams can spend, but also a minimum (given what competitive teams spend now) and that’s still over their budgets.

Of course, the regulations are only one side of Liberty’s battle to level the playing field, and now the focus turns to the next Concorde agreement. Chase Carey and co. are going to have a tough time both keeping Ferrari happy and enacting a more equitable payout structure, to say nothing of the Scuderia’s place of power with their veto. It’s not often I agree with Cyril Abiteboul, but here, he might have a point…

Verstappen Fires-Up Ferrari: Forget the upcoming Ford v Ferrari, now it’s Max versus the Scuderia after his comments on Sunday.

Deciding to pile-on in the wake of the FIA’s technical directive that supposedly closed a loophole Ferrari were using to extract more engine performance, Verstappen said it was “not strange” they were noticeably off the pace in Austin, telling Ziggo Sport “that’s what happens when you’re caught cheating.”

Unsurprisingly the Scuderia has taken this as something of an affront, with both Mattia Binotto and Charles Leclerc firing back at the Dutchman and his team. The question is though, is Max right?

The answer: nope. This excellent F1 straight-line speed comparison by F1ingenerale.com (translated by /u/prathyushetty10 on reddit) shows there is no real loss of performance since the directive was issued, while at the same time the SF90 was visibly struggling with grip in Austin, which is not an engine issue. Unfortunately, this means that like Mexico, this is another case of Max shooting his mouth off, and one that’s particularly bad given even his dad has called him out for it.

Lewis Makes It 6: You could argue it’s been a matter of time since basically Monaco, but finally, Lewis Hamilton has been confirmed as the 2019 F1 driver’s champion. Naturally, his accomplishment has been met with plenty of plaudits, while Hamilton himself already seems to have his eye on another title – not a great sign for the rest of the grid!

Something I touched-on briefly on Monday, and something I’ve seen tossed around on social media since, it really is remarkable he hasn’t been knighted yet. He is undoubtedly the best British sportsman of the past two decades, and while I’ve seen reasons thrown out as to why he shouldn’t get a KBE, none of them really hold weight. He doesn’t live in the UK? Neither do many other British athletes. He doesn’t pay tax? Actually, he does. He’s still competing? So is Sir Andy Murray. And he supports no less than six charities. So what’s the problem?

Assuming nothing too nefarious, either there’s a lack of appreciation for motorsport on the nomination committee, or Hamilton’s personality and/or public image is being held against him. There’s no denying he can be a bit of a divisive character (we don’t have to look too far for proof of that!), but for a Briton to accomplish what he has on the world stage and not be recognized for it is frankly, bollocks.

Renault and Alfa Make Moves: Two teams with their focus fixed firmly on the future, Renault’s re-shuffling of their aero department – including the introduction of Pat Fry – and Alfa Romeo’s re-signing of Antonio Giovinazzi are definitely noteworthy moves, if unlikely to impact the wider championship in the near future.

For Renault, it’s a move that needed to be made given the stagnation they’ve experienced in 2019, and while Fry is no Adrian Newey, he has presided over several championship-winning cars, and had a direct hand in McLaren’s improvement this season. Now if only the French outfit could sort out their engine…

Similarly, I think Alfa have made the right move here with Giovinazzi. Yes, I know I’m on the record saying they could give Mick Schumacher a shot already, but at the same time, the Italian has earned the right to keep his seat. Ever since the summer break, he’s been a much-improved driver, giving Kimi Raikkonen a serious run for his money and scoring the team’s only points in Singapore and Russia. Together Alfa have a good pairing, and now, the onus is to ensure they give their drivers a car next year that performs more like the first-half of 2019 than the second.