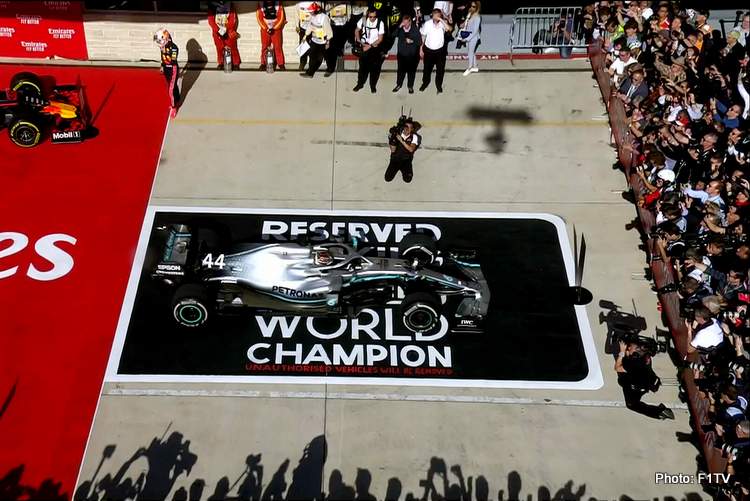 Lewis Hamilton was crowned 2019 Formula 1 World Champion in fine style, finishing second at the United States Grand Prix to wrap up his sixth title, one short of the sport’s record-holder Michael Schumacher. 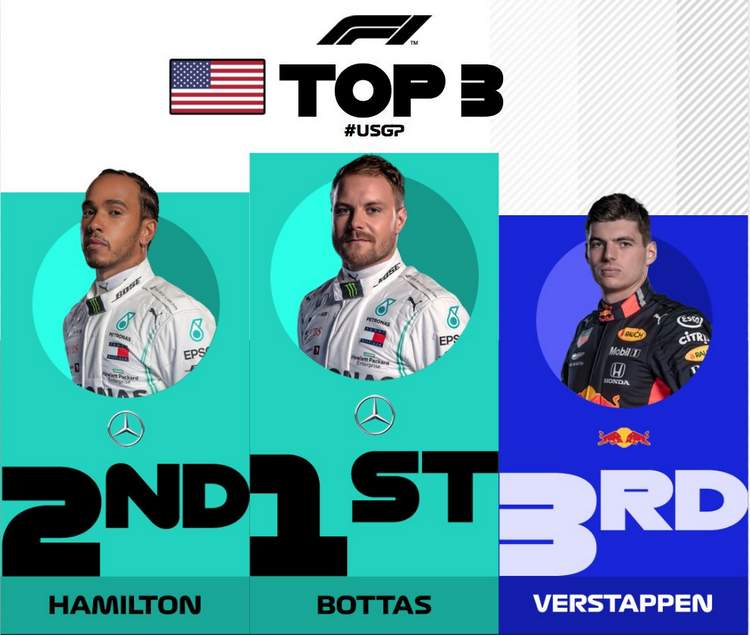 Althoungh Mercedes teammate Valtteri Bottas won the race, the pair going toe-to-toe with a handful of laps remaining with the #77 car snatching the lead from the #44 car, the latter on very worn Pirelli tyres.

It was a deserved win from pole position for the Finn who has, more often than not, played second fiddle to his teammate but the day belonged to the man in the other Silver car.

From fourth place on the grid, Hamilton took advantage of Ferrari’s now common wobble – the Italian outfit went AWOL on Sunday afternoon – to seal the deal with two races still remaining, but the reality is he did the hard lifting before the summer break when Mercedes – and the Briton in particular – were almost unbeatable.

Thereafter, with Ferrari finding some extra horses but failing to turn superior pace into victories, Hamilton simply took the gifts in Red wrappers and turned them into unlikely victories that were never meant to be his.

The reality is that Mercedes, the best team in the history of the sport combined with the best driver of this generation, has delivered once again, making it 12 titles in six years. Unprecedented and magnificent.

Overwhelmed by the moment Hamilton said afterwards, “It’s just overwhelming. It was such a tough race today. Yesterday was a really difficult day for us, Valtteri did a fantastic job.

“Today I just wanted to recover and deliver the one-two for the team. I didn’t think the one-stop would be possible. I’m filled with so much emotion. It’s an honour to be up here with those greats.

“My dad told me when I was 6 or 7 years old to never give up. That’s the family motto. I was pushing as hard as I could and was hopeful I’d be able to win today but didn’t have it in the tyres.

“I don’t know about championships, but as an athlete, I’m as fresh as can be right now. These next races we won’t let up,” added Hamilton.

As for the race on Sunday in Austin, which Bottas won, it was hardly a contest but more like a procession. Very little racing was actually happening out there on a monotonous the bumpy confines of Circuit of the Americas.

The Bottas vs Hamilton brief ding-dong was probably the highlight of a dull race, as was the tense scrap between Sebastian Vettel and Charles Leclerc very early on in proceedings.

Thereafter, Ferrari did what they normally do these days: fail.

Vettel was an early retirement as his car had issues from the start as he was defenceless to being gobbled up and down the order before the rear suspension on his SF90 broke.

It was an early shower for the German while his teammate Leclerc toiled all afternoon to finish fourth not helped by a pitstop fumble that cost him several seconds. Where did the Ferrari horsepower go?

Red Bull’s Max Verstappen finished third in a somewhat lonely, incident and action-free run to third place and join the Mercedes duo on the podium for his efforts.

The Dutchman said, “We did the best we could, they were just a little bit faster today. It was a very good race and it was fun. I could still see the cars ahead of me and we had good pace today.

“The yellow flag on the back straight meant I couldn’t use the DRS otherwise I think we could have been second. Still good to be on the podium.

“It’s very impressive by Lewis. What else can you say. He’s doing phenomenally, has a great team behind him and I hope we can take the fight to them next year,” added Verstappen.

Red Bull teammate Alex Albon was in the wars on the opening lap, his car getting airborne over the kerbs. The rookie pitted early, rejoined at the back and then employed a three-stop strategy to carve his way to fifth place.

The Best-of-the-Rest was a bare-knuckle brawl between Renault and McLaren with Daniel Ricciardo ‘winning’ Formula 1.5 with sixth place.

The Australian getting the better of the McLaren pair who were impressive all weekend long with Lando Norris again shining with a feisty performance which saw him as high up as fifth at one point. He was seventh when the chequered waved, with Carlos Sainz eighth and lapped by the winner.

Toro Rosso’s Nico Hulkenberg was ninth, ahead of Daniil Kvyat who claimed the final point for Toro Rosso.

Hamilton started the race from fifth place, his lowest grid spot of the season, but after the start he quickly climbed into the top three as both Ferrari drivers had difficult starts. Vettel was passed by Verstappen into Turn 1 and Leclerc was passed by Hamilton.

Further back, Albon collided with Sainz and the Red Bull rookie was forced to pit at the end of the lap. He took on medium tyres, rejoined in P20 and then began a fightback through the order.

Vettel, meanwhile, was losing more ground. The Ferrari driver reported “crazy understeer” after the start and by the end of lap one he was down to P7 as both Norris and Ricciardo surged past.

And by lap 8 the German’s race was run. As he ran over the kerbs in Turn 8, his rear right suspension collapsed. He managed to maintain control and pulled over at the side of the track and retired.

By lap 12 Bottas had carved out a three-second gap to Verstappen, with Hamilton a further eight-tenths of a second behind.

Hamilton now began to close on the Red Bull driver and at the end of the following lap Verstappen elected to put for fresh tyres. He bolted on a set of hard tyres and rejoined in P4 ahead of Ricciardo.

Mercedes responded to Verstappen’s stop by pitting leader Bottas at the end of the following lap and he rejoined in P3, just ahead of the Dutchman. Both quickly powered past the much slower Leclerc and resumed their battle in P2 and P3 respectively.

Further back, Albon made a second stop, for medium tyres, on lap 20 and dropped back to P15. He once again started a march up the order and by half distance he was back into the points, in ninth place.

Hamilton, though, stayed on track and nursed his starting his medium tyres until he was at last passed by Bottas on lap 24. The Briton dived for the pits and after switching to a set of hard tyres he rejoined in third place behind Max.

Ahead, Bottas now led Verstappen by six seconds, with Hamilton a further 11 seconds back in P3. Leclerc was now a lonely fourth, some 25 seconds off Hamilton and 14 seconds clear of Ricciardo.

The McLarens of Norris and Sainz were now sixth and seventh and respectively and after dismissing Gasly and Sainz, Albon found himself in P7.

His next target was Norris and within two laps he’d caught his fellow rookie. He then made quick work of reclaiming his starting position of sixth with a good move past Norris into Turn 1.

With his tyres fading, Verstappen was now beginning to drop back from leader Bottas. He dived into pit lane on lap 35 to take on a new set of medium tyres. Mercedes again covered the move by pitting Bottas at the end of the next tour and as Hamilton once again assumed the race lead as Bottas emerged in P2.

Bottas then began to close on Hamilton and by lap 50 the Finn found himself within DRS range of his team-mate and began to attack. His first effort was rebuffed, but with five laps remaining there was nothing Hamilton could do as Bottas made the most of DRS on the back straight to power past on the inside and reclaim the lead.

As Hamilton’s pace dropped on fading tyres, Verstappen smelled blood. With two laps left the Dutchman got to within DRS range of the championship leader, but though he pushed to find a weakness, no opportunity presented itself and as Bottas crossed the line to take his fourth win of the year.

But Verstappen was forced to settle for third-place as Hamilton took second to wrap up his sixth Formula 1 World Drivers’ title.

Behind the top three, Leclerc finished a distant fourth, some 52 seconds behind the race winner. Albon finished fifth after once again dropping back following a third pit stop for soft tyres late in the race. Sixth place went to Ricciardo with Norris seventh ahead of teammate Sainz.

Hulkenberg took an extra two points for Renault with ninth place and the final point on offer went to Pérez.

What a day for @LewisHamilton in Texas

Only one driver – the great Michael Schumacher – has more#USGP 🇺🇸 #F1 pic.twitter.com/WIOCHEVXhw 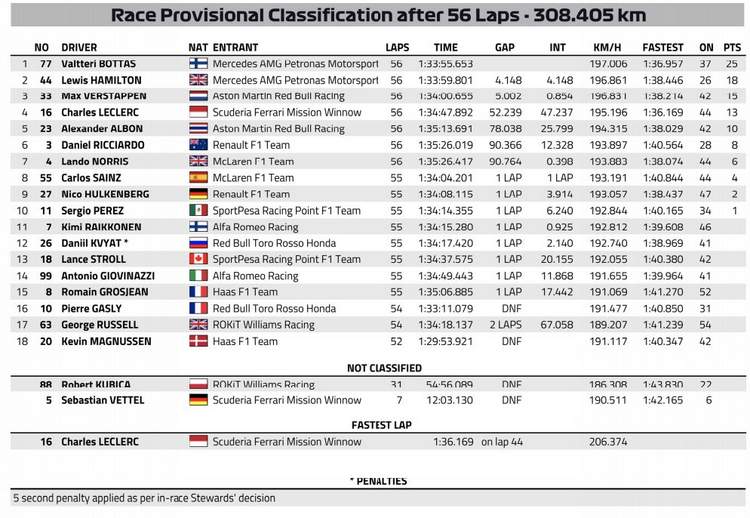 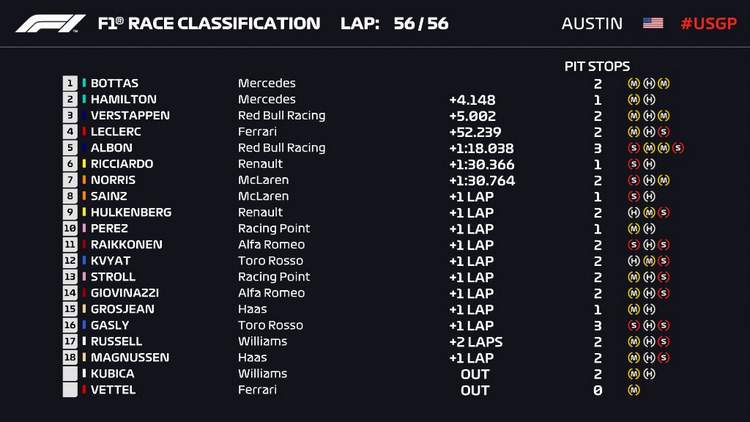 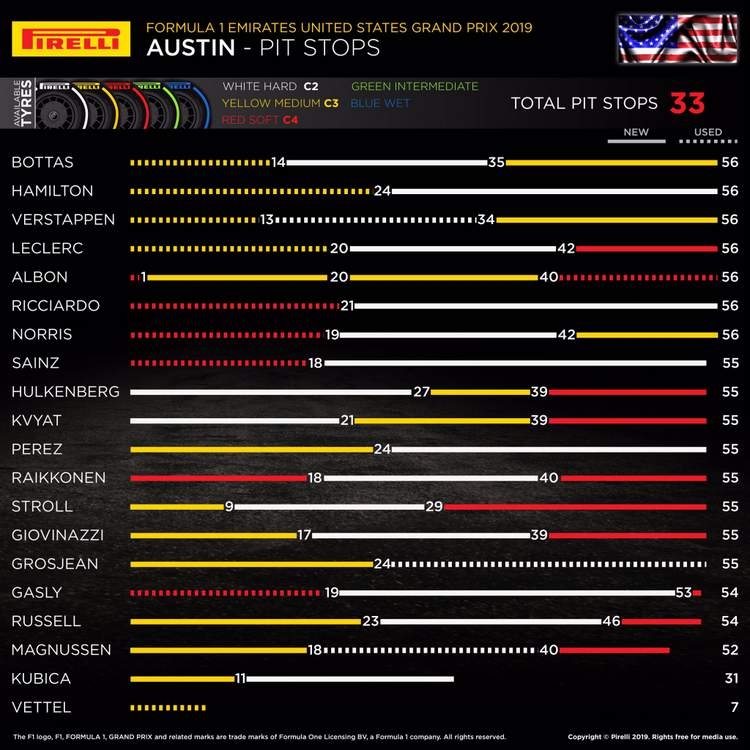 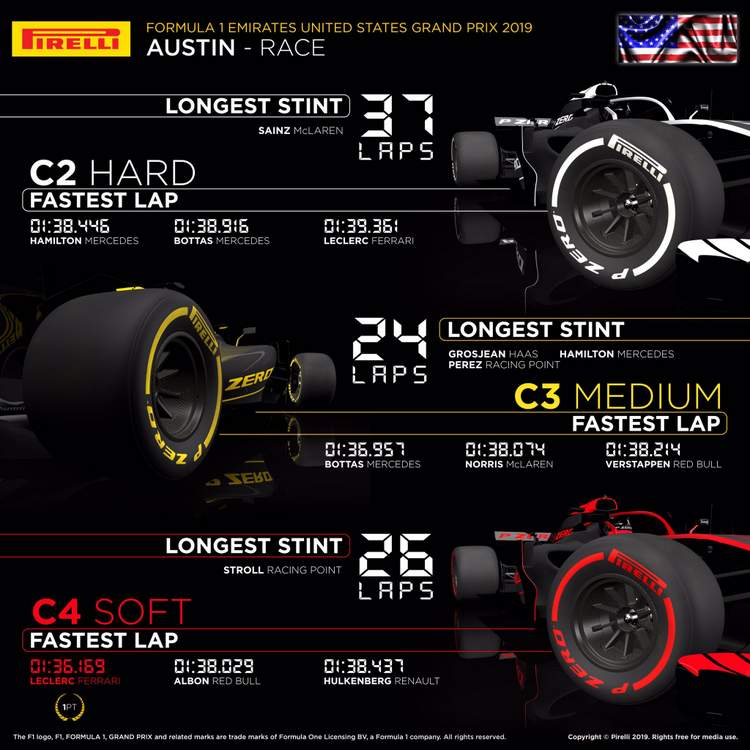