Toro Rosso: Today’s Race Did Not Provide the Result We Wanted 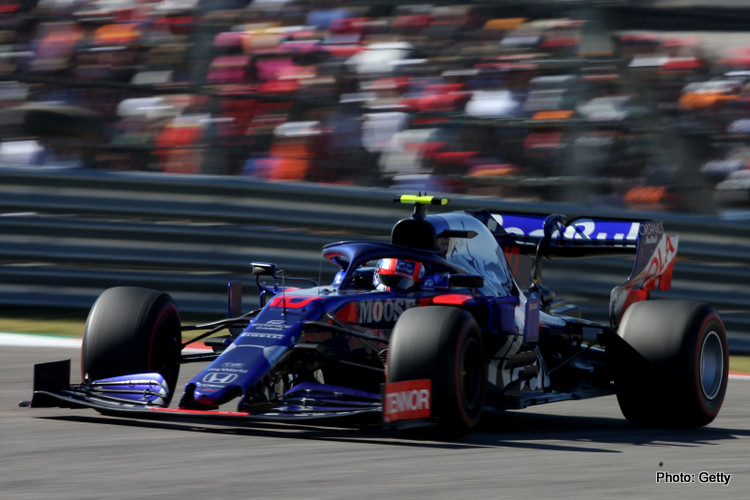 Toro Rosso report from Sunday at the United States Grand Prix, round 19 of the 2019 FIA Formula One World Championship.

Daniil Kvyat (STR14-03, Car 26)
Race: Pos. 12th
“It was a tricky race, we were a little bit off the pace today compared to our direct competitors. We used the tyres a bit more than we usually do, so we need to analyse that. Even with those issues, I managed to finish P10 on track on the last lap. I think was a harsh but fair move, it was great racing like we want to see and what we have seen this season without other drivers being penalised. I’m very upset and disappointed about this penalty because I don’t think this is what our sport needs.”

Pierre Gasly (STR14-04, Car 10)
Race: DNF
“It was a really good race as we were running in the top 10 for most of it and keeping pace with the McLarens. In the end I started to fight with Sergio and we made contact in Turn 13 which broke the front right suspension, so we had to retire the car. We were fighting, he went down the inside of Turn 13 then we touched with my front right tyre which bent the suspension. I don’t think it was anything big, but it was enough to put me out of the points and end our race. It’s disappointing to end this way after a strong weekend.”

Jody Egginton (Technical Director):
“Today’s race did not provide the result we wanted, which is disappointing especially given the performance shown up to this point in Austin. Pierre had a reasonably strong race early on but ran out of tyres in the last few laps, which meant he was unable to defend against the cars behind who were on fresher tyres. Ultimately, he was forced to retire due to the damage sustained from contact with Perez. Dany’s race started to come together in the last ten laps, but with the yellow flags at Turn 12 in the last two laps of the race, opportunities to make a pass for P10 were limited. The move that he made on Perez was deemed too aggressive and we got a time penalty of five seconds, which puts us out of the points. We unfortunately lost a position in the Constructors’ Championship here in the USA, but there are two races to go to recover and we will be working hard to make sure we are well prepared to do this.”

Toyoharu Tanabe (Honda F1 Technical Director):
“Once again today, Max Verstappen delivered a strong performance to finish on the podium in third place. It’s a good result, maybe a bit disappointing, as we felt he had a chance of taking second place at the end, but unfortunately, the yellow flags prevented that. He was quick all weekend. Alex Albon unfortunately dropped to last after the collision at the start, but he drove very well to fight his way up the order to finish fifth. As for Toro Rosso, Pierre was in the points for most of the race, so it was disappointing that both cars failed to score, as for a moment it looked as though Kvyat would get the last point for tenth. Finally, congratulations to Lewis Hamilton on his incredible achievement.”