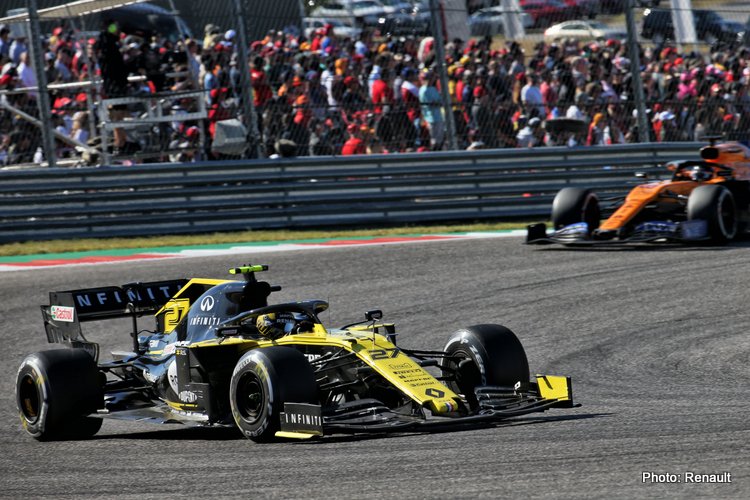 Renault report from Sunday at the United States Grand Prix, round 19 of the 2019 FIA Formula One World Championship.

Renault F1 Team picked up ten points from the United States Grand Prix with Daniel Ricciardo sixth and Nico Hülkenberg ninth in a thrilling race at the Circuit of the Americas, Austin.

Daniel made a quick start and progressed from ninth to sixth by the end of lap two, passing both McLarens and Ferrari’s Sebastian Vettel. After jostling with Lando Norris, Daniel overtook the Briton for fifth on lap eight.

He pitted on lap 21 for Hards, meaning he would go to the end on those tyres on a planned one-stop strategy. Daniel was maintaining fifth before Alexander Albon came through eight laps from the end, but the Australian did enough to hold off a charging Norris at the flag.

Nico’s race was a tale of two halves. He lost places at the start, falling from eleventh to thirteenth, and endured a tricky first stint on the Hard tyre. Converting to a two-stop, the German pitted for Mediums on lap 27 and then Softs on lap 39, which meant his 14-lap third stint would put pressure on those ahead. It paid off as he passed Pierre Gasly on lap 53 and then Sergio Perez a lap later for ninth place.

Nico Hülkenberg, started P11, finished P9
“I’m really happy to take two points today especially after losing some ground on lap one. It was a race of two, contrasting halves for us. The first part wasn’t great, we lost places at Turn 1 and Turn 2 on the opening lap with some cars coming back onto the track in front of me. That made things difficult, but then the second-half of the race was a lot of fun. We converted to a two-stop strategy, maybe a lap or two too late, which was my decision, but we then started catching others in front. We had good pace, some fun fights, so we can be pleased to score two points today.”

Daniel Ricciardo, started P9, finished P6
“We’ve had a lot of fun races this year and this one is certainly up there. The one-stop was the plan and it looked like others on the two-stop would get close at the end, which made things a bit nervy. We reached our target of beating both McLarens, so that’s really pleasing. It was a strong race and we showed good pace. I enjoyed the battle with Lando [Norris] as I passed him and he passed me back a couple of times at the start and then put some pressure on towards the end. We held on for sixth, so it’s solid points for the team with Nico in the top ten as well.”

Cyril Abiteboul, Team Principal:
“We have to first acknowledge it was once again a great race in our pack with very open and exciting strategic options for all. I think our drivers, and the team, enjoyed the race. Daniel made an excellent start and was one of the few drivers who managed to make a one-stop strategy work. When Norris stopped, we decided to be aggressive and not stop to try to beat both McLarens, which worked. On Nico’s side, the strategy set before the race was also a one-stop, but we managed to switch it on time and Nico kept his head down when he slipped in the leaderboard. He was then able to regain positions on Soft tyres at the end thanks to clever fuel management at the beginning of the race.

“Today we witnessed a great show, the Formula 1 we like to see, with on-track action. We are satisfied with our American campaign and a nice harvest of points over the last two races. I would also like to congratulate Lewis Hamilton for his sixth title. It is particularly inspiring to see how he and his team are able to make things look easy when this sport is so demanding for everyone involved.”