Racing Point: A Satisfying End to a Challenging Afternoon 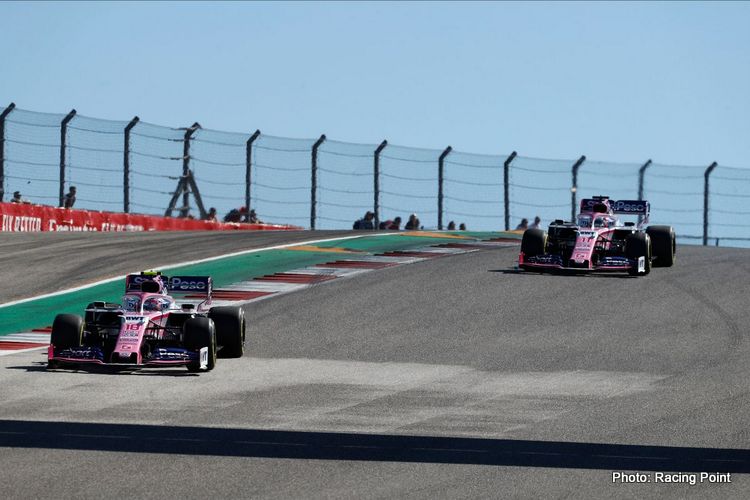 Racing Point report from Sunday at the United States Grand Prix, round 19 of the 2019 FIA Formula One World Championship.

Sergio: “We had a tremendous race today and we managed to recover well as a team. We used a very aggressive one-stop strategy and had good pace all afternoon. On the final lap, Kvyat crashed into me and damaged my front wing, but he was penalised and we took back the tenth place. One point means we move up to sixth place in the Constructors’ Championship, which is important with two races to go. It’s only a point today, but every point will count at the end of the season.”

Lance: “It was a long afternoon and for sure I’ve had better days. It’s a shame because the car felt good and we know we can fight for points, but unfortunately things didn’t go our way. I didn’t get the best start as I was squeezed and we picked up damage through Turn 1. The track was very bumpy on the outside of Turn 2 and I hit a bump, had a big snap of oversteer and fell down the field. Given our track position, the team tried to roll the dice and switched me to a two-stop strategy: we were showing good pace in the second stint, but we ran out of tyres towards the end of the race. It’s a shame, but sometimes you have days like these and we just have to come back fighting in Brazil.”

“Seeing Sergio race from the pit lane to a points finish is a satisfying end to a challenging afternoon. It wasn’t easy to make the one-stop race work, but Sergio did a fantastic job to look after the Hard tyres and maintain good pace for 31 laps. Things got a bit messy on the final lap when Kvyat made contact, but justice prevailed as the stewards reinstated Sergio into a well-deserved tenth place. Lance’s race was compromised from the start when his front wing was damaged and he dropped almost to the back of the field. Due to the damage, which affected the car’s balance, we converted to a two-stop race but ultimately missed out on points.”