Outside Line: King Lewis and the road to his sixth F1 title 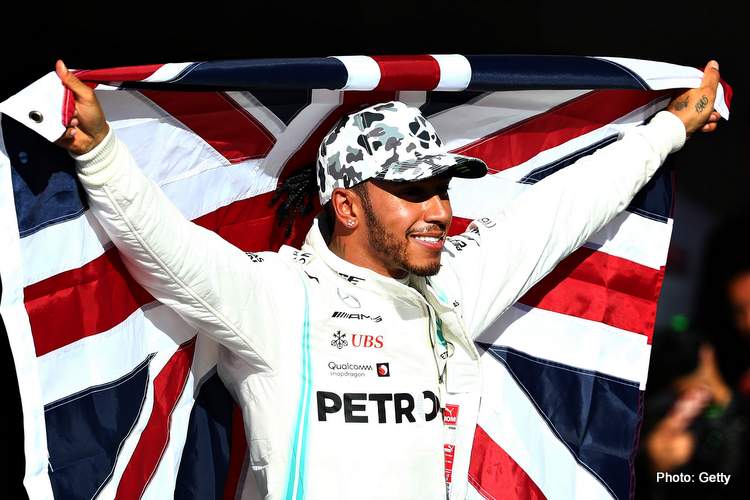 Bringing home the bacon with his second in Austin, Lewis Hamilton is officially a six-time F1 driver’s world champion. Take a look back at the Briton’s 2019 season, with a journey just as remarkable as the destination.

Having to hear all throughout preseason that Ferrari had finally caught up to him and Mercedes, Hamilton went out and promptly put his car on pole at the first race in Australia, and while he didn’t win there, it would set the tone for his first six races, winning four of them. Even if there was a dose of good fortune involved – his win in Bahrain in particular – it was apparent the Briton was as ever, the man to beat, holding a 17-point lead over teammate Valtteri Bottas after Monaco.

Canada: A Gift from the Hea- … er, Stewards

Even before this season, there had been no race on the F1 calendar that better to Hamilton than Canada, and that goes doubly so after the 2019 edition, in which he took a record-equalling seventh win at the venue in remarkable fashion. Putting in a brilliant lap on Saturday to line-up P2 and split the faster Ferraris, Hamilton looked set to finish where he started until on lap 48, leader Sebastian Vettel made a crucial mistake going into turn three, forcing him onto the grass as he missed turn four. In re-joining the track, Vettel kept his lead but nearly collided with Hamilton, for which he was penalised for re-entering unsafely and handed a five-second time penalty, in turning handing the Briton the win despite crossing the line in second.

Fresh off his remarkable win in Montreal, Hamilton followed it up with a dominant win from pole at Paul Ricard, and after an all-around dismal day for Mercedes in Austria, trounced Bottas on his way to a home win at Silverstone. Despite starting from pole, Germany would end-up being his worst race of the season, as he was one of several victims at Hockenheim’s turn 17 in the tricky wet conditions, but made matters worse by illegally cutting across the track to duck into the pits. The subsequent lengthy pit-stop and five-second penalty knocked him completely out of contention, ending up ninth at the flag.

A win no-one saw coming – including Hamilton himself – the story for most of the race was pole-sitter Max Verstappen doing just enough to hold-off the Mercedes on the generally hard-to-overtake Hungaroring circuit, until on lap 48, with an almost 40-second gap behind him, the decision was made to take an unscheduled second stop for medium tyres. Vocally sceptical on team radio, Hamilton’s misgivings proved unfounded as Verstappen’s hard tyres began to fade significantly, and from 12 seconds behind on lap 60, the Mercedes driver was able to pass just six laps later to take a lead he wouldn’t relinquish.

Needing a miracle to get back in either championship fight at this point, Ferrari did at least partly get their wish after the summer break, as their car was suddenly fast not just in a straight line, but was no longer a dog in the corners. As a result Hamilton would go winless across Spa, Monza and Marina Bay, and while he was still doing more than enough to ensure he’d hold his lead in the standings, it was fair to wonder just when he’d stand on the top-step of the podium next…

As it turned out, he didn’t have to wait long. At the very next race in Sochi, Ferrari squandered a front-row lockout with some intra-team squabbling and an untimely MGU-K failure to Vettel, with Hamilton there to pick up the pieces. Suzuka saw more folly from Ferrari – albeit with Bottas the one to take advantage and give his flailing title hopes a boost – before Hamilton made the most of ambitious strategy which saw him run 48-laps on the hard tyre to swoop-in for another unlikely victory from fourth on the grid. A superb drive, it was now a matter of when, not if, he would be champion.

Needing only an eighth-place finish to take the title, Hamilton was all-but assured of sealing the deal in Austin, but that didn’t stop him from trying to have his cake and eat it too with one more victory. Alas, having started fifth after an uncharacteristically poor qualifying, his ambitious one-stop strategy that saw him run for 32 laps on a set of hards came up frustratingly short, going from the lead of the race to behind Bottas in the closing stages. Denied the top step of the podium, Hamilton instead had to settle for the specially-reserved parking for the 2019 titlist, and with it, his sixth driver’s championship.