Never mind records, Hamilton in a league of his own 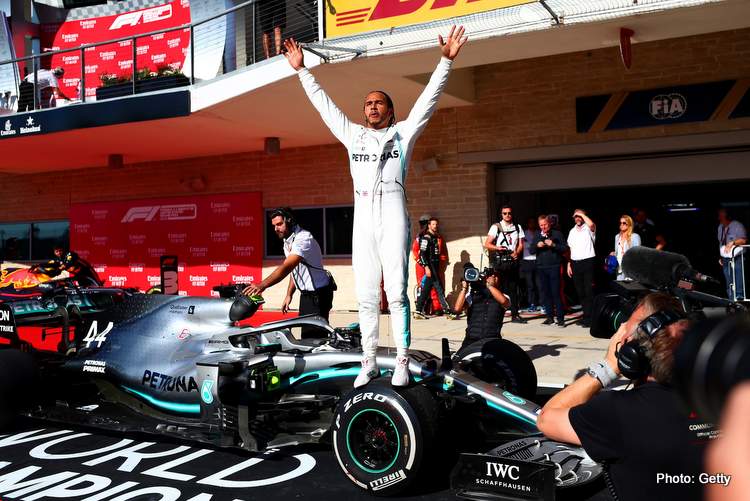 Newly crowned Formula 1 World Champion Lewis Hamilton is now one step away from joining Ferrari great Michael Schumacher at the top of the sport’s list of champions but some would already place the Mercedes driver in a league of his own.

The Briton moved up a notch in Sunday’s United States Grand Prix, finishing second in Texas to take the title with two races to spare and join seven-times champion Schumacher as the only drivers ever to win six crowns.

Hamilton already has plenty of records, including 87 pole positions and 33 successive scoring finishes, and his 83 wins put him on course to surpass Schumacher’s record tally of 91 next year.

Mercedes team boss Toto Wolff has said he can see the 34-year-old going on to shatter the German’s milestones.

David Coulthard, championship runner-up to Schumacher in 2001 and replacement for Ayrton Senna at Williams in 1994 after the great Brazilian’s fatal crash, suggested that would not be what really sets Hamilton apart, however.

“Can he win seven or surpass Michael? Yes, is the answer, of course he can,” the Scot told Reuters. “But I don´t think he has to, or needs to.

“I think he´s already cemented his place in absolute top-notch history in Formula One and the thing I think that really sets him apart from the greatness of Senna or Schumacher is his sporting ethics. I think that Lewis is an absolute through-and-through sportsman.”

While both Schumacher and the late triple champion Senna drew widespread adulation, with their racing brilliance often on another level to rivals, their actions courted controversy on numerous occasions.

Hamilton far less so, with the main blot on his copybook coming in 2009 when he was caught up in a scandal over lying to race stewards that cost McLaren sporting director Dave Ryan his job.

The champion has created many other headlines, inevitable for a driver who broke the mould by emerging from a non-racing and under-privileged background to become the sport’s first black champion, and remains a polarising figure.

The real respect and friendship of track rivals such as Ferrari’s four-times champion Sebastian Vettel, however, speaks volumes.

“I´ve always had this really strong feeling about what is a sports person and that is sporting integrity and following the rules,” said Coulthard of Hamilton.

“I think we are lucky to be witnessing greatness. And we´re British, so we don´t always appreciate that as much as we should.”

Hamilton has been a race winner in all 13 of his seasons in Formula One and was the youngest world champion until Vettel’s first in 2010.

He has led more races than any driver and averaged 10 wins a season for the last six years. The hunger and motivation appears as strong as ever.

The Briton, with his varied interests and life story of triumph over adversity through talent, has also taken Formula One to new audiences well beyond traditional motor racing enthusiasts.

Hamilton has gone vegan, used his social media platform of 13.4 million instagram followers to speak out on protecting the environment and animal welfare and pursued high-profile interests in fashion and music.

He is also very much a part of a closely-knit group of men and women, whose bonds have been forged over seven intense years of competition.

“He was very much at the beginning a fighter for his own cause, as most racing drivers are, and he has changed the pattern of how a racing driver is viewed in the team,” said Wolff, whose outfit have won the championship double for an unprecedented six years in a row.

“Racing drivers are normally viewed as contractors, but he has become a team member,” added the Austrian, when discussing the likelihood of Hamilton staying at Mercedes beyond 2020 and the expiry of his current contract.

“Racing drivers will always go for the best opportunity, sporting and financial, but I think with him relationships matter.”