McLaren: Our Teamwork Today was Key 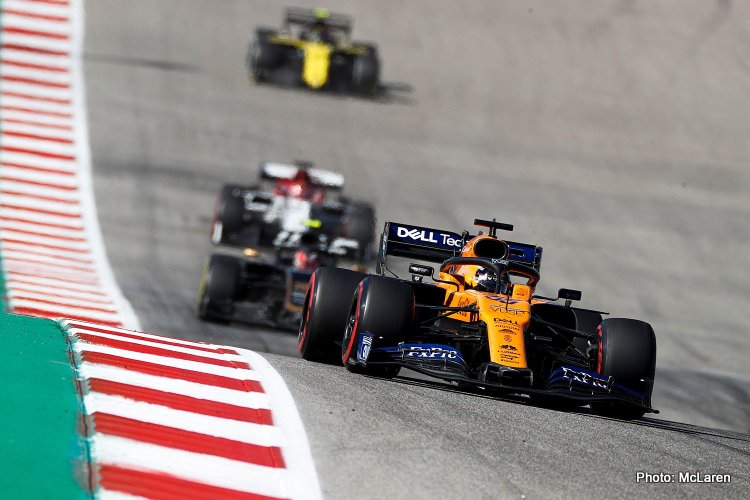 McLaren report from Sunday at the United States Grand Prix, round 19 of the 2019 FIA Formula One World Championship.

“It was a good day’s work for the team. We managed to bring home a couple of points finishes and a good ten points in the bag, so congratulations to everyone. For me, personally, I feel we could’ve achieved more, but my race was compromised at the start after I got hit into Turn One.

“Stopping for the Hard tyre and going for one stop meant I did a very long second stint. The pace was decent and we managed to secure an important P8. All in all a positive weekend and we move on to Brazil aiming for more.”

“A good race for the team and me! I had a really good launch off the line and was up to P5 after the first few corners. We’re doing a good job in this respect and it’s a good strength of ours. The rest of the race was tough, especially the first stint on the Softs. I struggled a lot compared to Daniel [Ricciardo] in the later laps with the tyres, which we kind of expected.

“We then did the Hard tyre stint and was close to getting Daniel after the stop. I tried to look after the tyres. He wasn’t pushing too much, so I was trying to push, and see if he made any mistake where I could get past him. But he didn’t and was just controlling the pace. We decided to box for Mediums and go for the two-stop – which turned out to be really good. A fun race, at least in the third stint, with some overtaking. Massive thanks to everyone back at the factory and at the circuit for their hard work.”

“Having underperformed last Sunday in Mexico we needed to bounce back here, so it was good to secure another 10 vital points in our fight for P4 in the Constructors’ Championship. Our teamwork today was key to our overall performance: from the mechanics, the engineering team here and back at our home base, and from the drivers, who’ve both put in very strong performances all weekend.

“After two weeks on the road it’s good to be going home. We’ll recharge and get ourselves ready to end the season strongly in Brazil and Abu Dhabi. Finally, congratulations to Lewis Hamilton. Six Drivers’ World Championships is an incredible achievement.”