Hamilton: I also struggle with things and battle demons 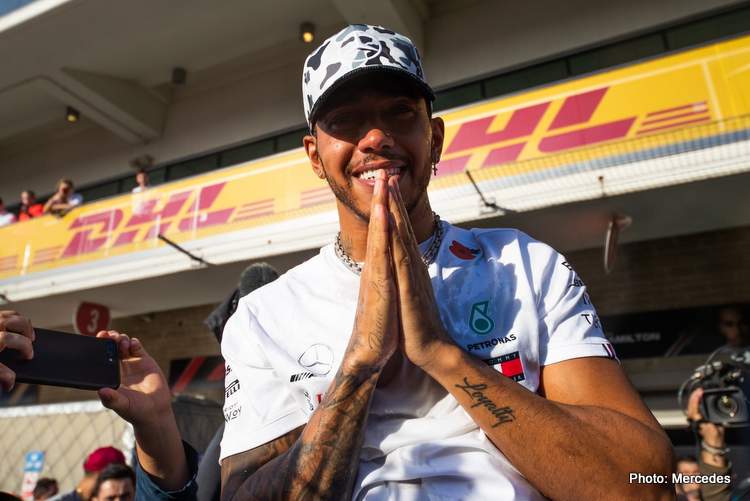 In his moment of triumph on Sunday, an emotional Lewis Hamilton reflected on loss, demons and the personal growth that led him to a sixth Formula 1 World Championship drivers’ title.

As his Mercedes team celebrated, Hamilton’s comments after the race said as much about the man as the fierce competitiveness he showed on the track in trying to seal the championship with a victory at the United States Grand Prix.

The win would elude him, ultimately going to teammate Valtteri Bottas, but only after Hamilton’s fading tyres saw him surrender the lead in the dying laps.

Second place was still good enough for him to become the second Formula One driver after Michael Schumacher to win six world championships.

“I don’t know, every journey is different,” said Hamilton when asked where title number six ranks. “Every year you go through a different rollercoaster ride of emotions to get to where you’re going.

“Each and every single one of us is struggling with something in life. I tried to show people that, from the outside, things always look great but it’s not always the case. And I am also struggling with lots of different things and battling certain demons and trying to make sure that I’m constantly growing as a person.”

Hamilton said it had been a real struggle to come to terms with the death of friend and triple world champion Niki Lauda, the team’s non-executive chairman who had been instrumental in persuading him to join Mercedes.

The dangers of the job also hit home with the death of Anthoine Hubert in a high-speed crash during a Formula Two race at the Belgian Grand Prix. The Frenchman was 22.

“I would say this year that losing Niki, I didn’t think that was going to hit me as hard as it did,” said Hamilton. “It really was upsetting and I miss him dearly today and I didn’t realise how much I loved the guy.

“Also we lost a young kid in Spa. Again, I saw it on the TV, I saw it happen. When something like that happens it can put lots of doubts in your mind and thinking: OK, jeez, is it time to stop or shall I keep going?’ Because there’s lots of life afterwards.

“I still want to spend time with my family, I still want to have a family one day, all these different things. But I love doing what I do so much that I don’t think there’s a lot that can particularly stop me in that sense.”

Hamilton said he would not truly reflect on what he has accomplished until the season is over. With two more races there is still work to be done.

“Usually the reflection comes at the end of the year when work finishes and you can just take a load off and just sit back and have a beer,” said Hamilton, finally breaking into a smile.

“I will be with my dogs, with my feet up and just only then you can have a moment to grasp how great a year it has been. I’m always just looking to improve and I really love being in this sport.”