Haas: We Just Haven’t Got Enough Performance in the Car 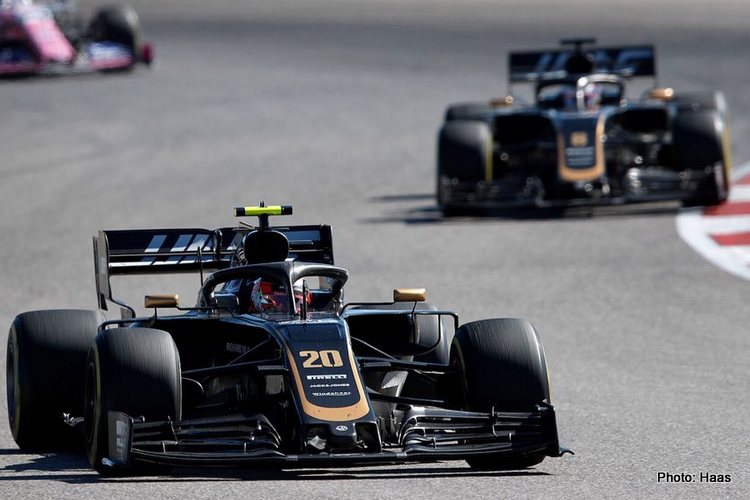 Haas report from Sunday at the United States Grand Prix, round 19 of the 2019 FIA Formula One World Championship.

Haas F1 Team driver Romain Grosjean finished 15th while his teammate Kevin Magnussen retired as the result of a brake issue two laps from the end of Sunday’s United States Grand Prix at the Circuit of the Americas, the 19th round of 2019 FIA Formula One World Championship.

Both Haas F1 drivers started on fresh sets of Pirelli P Zero Yellow medium tires and both made forward progress on the opening of 56 laps around the 5.513-kilometer (3.426-mile), 20-turn circuit. Magnussen jumped to 10th from his 12th-place grid position when he passed Renault driver Nico Hulkenberg and then Red Bull driver Alex Albon, who had to pit after first-lap contact. Grosjean moved from 15th to 14th as a result of Albon’s mishap.

The first to pit among the Haas F1 duo was Magnussen, who came in on lap 19 from the 14th position for a set of new White hard tires and resumed in 17th. Grosjean, meanwhile, was as high as 13th while stretching his initial tire stint and finally pitted from 16th on lap 25 for his set of hard rubber. He resumed in 17th, two positions behind teammate Magnussen.

The two maintained those relative positions before Magnussen made his second stop of the day on lap 42, pitting from 15th for a set of Red soft tires intended to take him the rest of the way. He resumed in 17th, then took advantage of the fresh rubber to pass Grosjean for 16th. Again, the Haas F1 drivers held position until the closing laps, when Magnussen slid deep into the turn-12 gravel trap at the end of the long backstretch as the result of a brake issue. That, and a last-lap incident involving Toro Rosso driver Pierre Gasly, enabled Grosjean to move up to his finishing position of 15th.

Mercedes driver Valtteri Bottas won today’s United States Grand Prix by 4.148 seconds over his teammate Lewis Hamilton, whose runner-up finish clinched his sixth career world championship and third in a row. The victory was the seventh of Bottas’ career, his fourth of the season and first at Austin. Red Bull driver Max Verstappen finished third.

The penultimate event on the 2019 FIA Formula One World Championship calendar is the Brazilian Grand Prix on Nov. 17 at Autodromo José Carlos Pace in São Paolo.

“It was tricky today. We knew going into the race that it was always going to be a little bit complicated. Unfortunately we didn’t have any top speed, so at the beginning of the race I couldn’t really pass any of the guys. Plan A was mediums then softs, so we tried to stay long on the mediums. Unfortunately they just died when everyone pitted, everyone was passing me, I lost an awful lot of lap time there. Then we went onto the hards and they were actually pretty good. I was happy with the balance and my lap times. We were just too far at the back with no chance to fight.”

“I had a brake issue at the end there. It was a tough day at the office. We weren’t fast enough today, just lacking grip and pace. We have some problems, that’s pretty clear, but I tried to do my best anyway. I got as high as ninth on those first laps – it was good fun, but then it was just so clear that we didn’t have the pace and we started to drop down the order. The race then ended with the brake failure.”

“Obviously, it’s a disappointing result, but it didn’t come unexpected. We know where we are at the moment, and it’s not where we want to be. We start the race then we just begin to go backwards, we just haven’t got enough performance in the car. Kevin (Magnussen) retired with two laps to go, we think it was something with the brake system. We need to investigate but we haven’t had the car back yet. There are two more races to go and we just need to keep our heads up. We’ll hopefully try and get a little bit out of it.”