Ferrari: We Are Deeply Disappointed 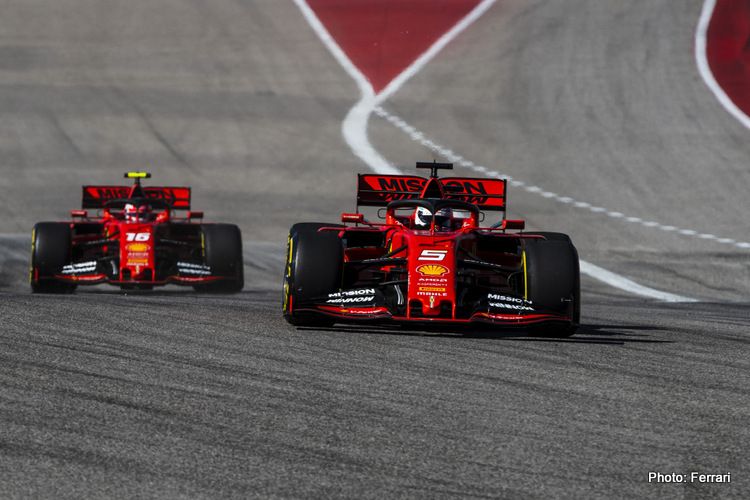 Ferrari report from Sunday at the United States Grand Prix, round 19 of the 2019 FIA Formula One World Championship.

Austin, 3 November 2019 – There was disappointment for Scuderia Ferrari Mission Winnow as it leaves Austin with just a fourth place finish courtesy of Charles Leclerc. In fact, the Monegasque driver had a tough time from Saturday onwards, when he had a power unit problem in free practice and he had to fall back on using a previous engine from then on. Sebastian had an even worse time of it, having to retire on lap 8 when a suspension component failed on his SF90.

Start.  Neither Sebastian nor Charles got the best of starts off second and fourth places on the grid, both men losing one place each to Max Verstappen and Lewis Hamilton respectively. Seb struggled for grip on the opening lap with massive understeer and was passed by Hamilton and Charles and a bit later by Lando Norris and Daniel Ricciardo. His race settled down from then on, but on lap 8 the right rear suspension broke and Sebastian had to retire.

Charles.  Leclerc struggled a lot in the first stint on the Medium tyres and was never able to run at a competitive pace. He made his first stop on lap 20, taking on Hard tyres and his pace picked up considerably, matching that of the three leaders. However, the gap that had built up in the first stint meant Charles ran a rather lonely race. He made a further stop on lap 42 taking on Softs with which he picked up the point for setting the fastest lap of the race in 1’36”169. Charles is still third in the Drivers’ championship, 14 points ahead of Verstappen and 19 in front of Sebastian. In the Constructors’ classification, Scuderia Ferrari Mission Winnow is second, with over a hundred points in hand over Red Bull. The next round, the penultimate race of the season, takes place on 17 November in Brazil.

“It was a really tough race, especially during the first stint where the front tyres did not feel right. It was difficult to find the grip and we have to look into how exactly that happened. The other two stints were a bit better, but not good enough. Our competitors were just too quick, so it was a rather lonely race for me today. It’s a shame for the team that we didn’t finish the race with both cars.
Congratulations to Lewis for the title. He is a great champion and deserves it.”

“I am very disappointed that I had to retire, because I was hoping for a good race.
I had very poor grip on the first lap and had to let a lot of cars by. I struggled to get the car to work, especially in right hand corners, maybe something was already broken on the car. Then, after seven laps the suspension failed over the bump in turn 8.
At that time, I hadn’t done anything different to the previous laps over the whole weekend. I think today we had the potential for a podium, so it’s a shame. Finally, I want to congratulate Lewis for his wonderful achievement.”

“First of all I’d like to congratulate Lewis for clinching yet another World Championship title. It is well deserved and was achieved in style.
As for our race, we were expecting much more from today.
Seb had a problem with the right rear suspension, when the upper arm broke at a very early stage of the race. We think this issue was probably there from the first lap, but we need to look into it to understand exactly what happened.
Charles’ race was compromised by his first set of tyres, on which he had no grip at all. We could not understand why he was so slow and off the pace. In the second and third stint he had good pace, but it’s difficult to compare it to that of the others, as everyone was in a different tyre situation at that point.
In the final stint, he then found the car much more to his liking on soft tyres and set the fastest lap
We now have a lot to analyse and to understand. We are deeply disappointed as we don’t believe this result mirrors our current performance level. There’s something to learn from any bad result and this is what we plan to do now.”