Bottas: Being Best of the Rest doesn’t feel good 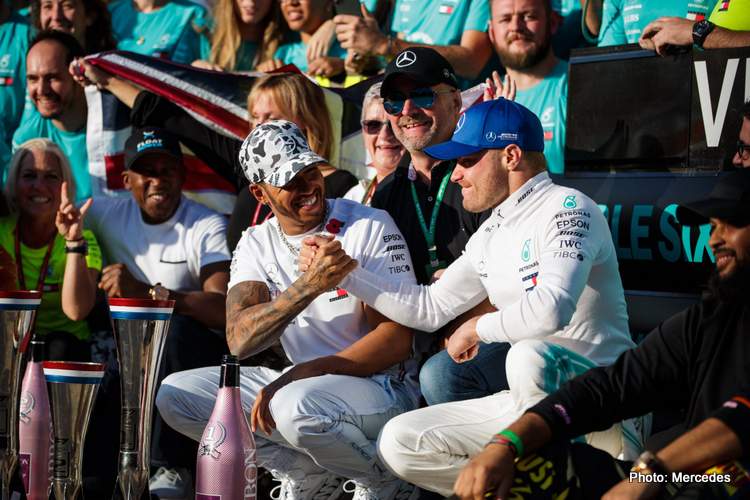 Even in victory, Valtteri Bottas had to play wingman to Mercedes teammate Lewis Hamilton at the United States Grand Prix as the Briton stole the spotlight by clinching a sixth Formula 1 drivers’ championship on the day.

From the cheers to the post-race celebrations Hamilton was once again the man of the moment and overshadowed a superb win by the Finn, who might have been among the very few at a packed Circuit of the Americas delighted at having denied the hugely popular Briton a win to crown his championship.

“Lewis I am sure really wanted to win this race to win the title,” Bottas told reporters. “Winning the race I got to stop that, so that feels good.

“I just look forward to next year, it is a new opportunity.”

Talking like a driver weary of playing Ringo to Hamilton’s Paul McCartney, Bottas said he was already looking forward to next season despite the fact there are still two races left on the current calendar.

With four of his seven career wins coming this season, Bottas is in the middle of his best Formula One campaign. He clearly hopes to use that as a springboard into 2020 and a run at replacing Hamilton as top dog at Mercedes and his stated objective of becoming world champion.

“I felt this year being the best of the rest doesn’t feel good,” said Bottas, who has occasionally outperformed his teammate, particularly during qualifying, but never outshone him. “But I also need to look at the positives as well.

“This was my best season in Formula 1. so far and, looking at other positives, I made huge gains in other areas in terms of race pace and everything.

“Unlike the end of last year I really look forward to the year ahead and I am already excited to start the next season and start from fresh.”

Bottas, who joined the team in 2017 after Nico Rosberg’s sudden retirement, has had little in the way of job security at Mercedes.

It was not until August that the Finn and his team agreed to a one-year contract extension, meaning he is likely to face the same distractions in 2020.

“There was definitely uncertainty for 2020, lots of rumours, I had no idea what was going to happen,” said Bottas. “I had to wait.

“As a driver it is not an ideal situation, you can’t be completely with the peace of mind and really focus on the job and mentally free. So it was definitely nice to get the contract signed but it is going to be the same story next year.

“But not too worried at this point, I enjoy the driving and I enjoy working with the team and I hope they appreciate that as well,” added the Mercedes driver.