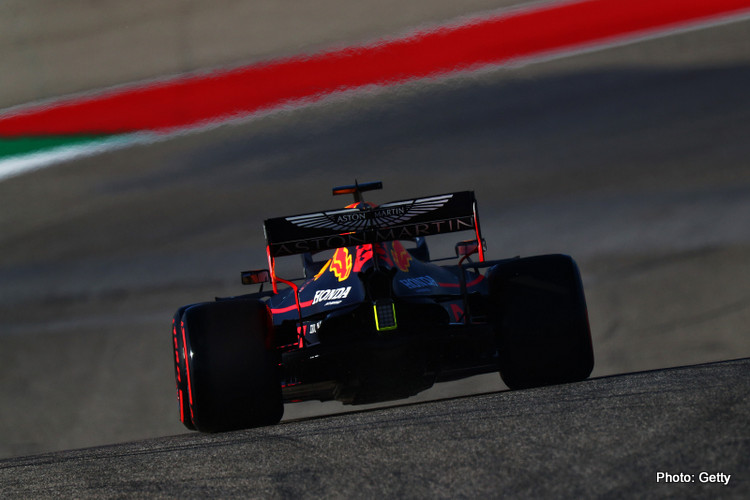 Red Bull report from Saturday at the United States Grand Prix, round 19 of the 2019 FIA Formula One World Championship.

“It has been a good weekend so far and for us to be this competitive on this track is very positive and it shows that the car is working really well. I think in general Q3 for everyone was a bit more tricky than Q2 because of a change in grip but to be P3 and that close to P1 is a good result and I’m happy with it. Of course, we would have liked to be P1 with that margin but this is still a good start and now we just have to hope for a competitive race. We are starting more towards the front than usual at this track, the car balance is good, I think the engine power has also improved and we are all so close. A lot will depend on the tyre life and strategy tomorrow but whatever happens it should be a good race and I’m looking forward to it.”

“In the end I’m quite happy and I think we did a good job in qualifying had it not been for my mistake on the last lap. FP1 was pretty good but I struggled in FP2 and FP3 which were two difficult sessions. I found the rhythm again in qualifying and I was three tenths up on my final Q3 run before I ran wide and got my time deleted. I think as drivers we prefer circuits that don’t allow you to break track limits because if there’s something there to stop you, it will. It was my last lap in Q3 where you’re always pushing for an extra couple of hundredths and it was one of those things. I think I was on for a 1:32.2 which isn’t the same pace as the guys ahead but I was more or less there. We’re the first to start on the soft tyre tomorrow so hopefully it gives us a launch advantage and we can overtake a couple of cars into Turn 1. We just need to avoid the carnage and then hopefully we’re in the fight. I think our race pace is always pretty good and let’s see what the weather does tomorrow. If it’s warmer than today, my tyres will degrade quicker but then the others will have to two stop, so let’s see what happens!”

“It was a really tight qualifying today. Max is P3 and ultimately missed out on pole by just six hundredths of a second so it’s ridiculously close. It’s good to line-up on the second row of the grid and especially to see the cars’ competitiveness at this circuit. Alex continues to make progress and is only two tenths behind Lewis, which is a good performance from him. He’ll be starting the race on a different strategy tomorrow with the soft tyre which sets us up for an exciting US Grand Prix, and especially Turn 1. We’ve been in the top three throughout every session so it’s been a positive day and it’s clear we’ve had a competitive car here this weekend. Now we just need to build on that in the race tomorrow.”