Haas: Not Too Bad of a Day 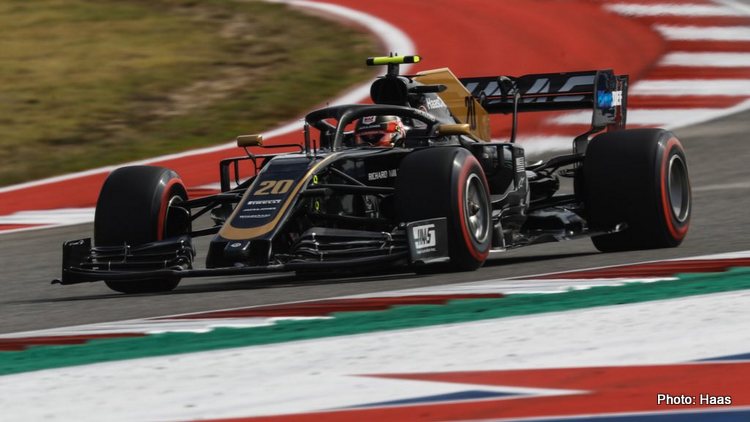 Haas report from Saturday at the United States Grand Prix, round 19 of the 2019 FIA Formula One World Championship.

Haas F1 Team drivers Kevin Magnussen and Romain Grosjean qualified 12th and 15th, respectively, for Sunday’s United States Grand Prix, the 19th round of the FIA Formula One World Championship at Circuit of the Americas.

Looking to put a disappointing Mexican Grand Prix qualifying performance behind them from last week – where Magnussen and Grosjean exited in Q1, Saturday on home soil proved more fruitful with both drivers advancing to Q2. Solid runs saw them graduate to the second knockout session with Magnussen seventh overall with a 1:33.812, Grosjean 15th on a 1:34.161.

Taking the United States Grand Prix pole and his sixth of the season, and 11th overall in his Formula One career, was Mercedes driver Valtteri Bottas, whose fast Q3 lap of 1:32.029 beat second-place qualifier Sebastian Vettel of Scuderia Ferrari by .012 of a second.

“I think we got the complete maximum from the car with P15 in Q1 and again in Q2. We’ve had a complicated weekend with a brilliant car in FP1, then in FP2 we tried a different aero package which obviously had a massive issue in high speed. I reverted to the FP1 package in FP3 and unfortunately had some rear wing issues. We had to change the rear wing to anther spec for qualifying. I think I was losing something like half a second on the straight. There wasn’t much I could do. We’ll see what happens tomorrow. If it’s hotter it might work better for the tires, but at the minute we’re lacking a lot of top speed.”

“Not a bad afternoon, it could be worse, I guess. We’re just outside the top ten with a free choice of tires for tomorrow. I don’t know if that’s an advantage, we’ll see about that. I haven’t looked too much into that myself. I had the car underneath me today, I’m pretty happy with qualifying in terms of my own performance and the team’s. We’ve built up over the weekend and we’ve had some fairly strict aero programs to get through – it upset the weekend a little, but we did a good job with what we had. We’re in the ball park.”

“Not too bad of a day today. We got both cars into Q2, so compared to Mexico last week, that’s a good improvement. We just need to get our strategy right tomorrow with the tire choice. Maybe we can make some progress in the race. Maybe we can bring some points home – hopefully. That’s what we’re going to try to do. It’s cool outside and that normally helps us. We’re going to try our best to get points.”