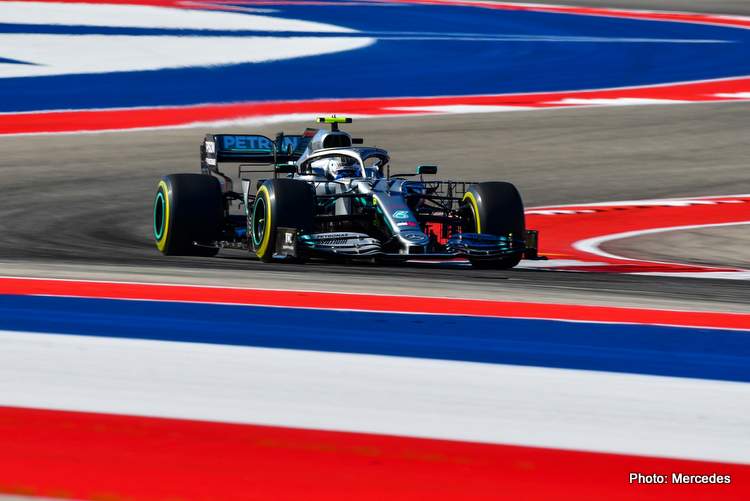 Mercedes driver Valtteri Bottas will start the United States Grand Prix from pole position, after pipping Ferrari’s Sebastian Vettel to the top spot start for the race at Circuit of the America’s on Sunday.

The first run in Q3 seemed to be prime time as none of the heavy hitters went faster with their second runs, Bottas timed it right to deliver a top-notch lap which was enough to do the business on Saturday. It was his fifth pole of the season.

The Finn said afterwards, “It was a nice lap in the beginning of Q3, you rarely get those. Yesterday was a bit tricky. I knew how to put it together and it was a nice feeling to actually do it in Q3.”

Vettel said of his effort, “Overall happy. Let’s see for tomorrow and have a good start.and then a good race. All of us are on the medium tyre so nobody had an advantage there. The first lap for sure is important but it’s a long race after that.”

Verstappen’s offering was again high-end stuff from, only fractionally off pole and almost a second up on teammate Alex Albon who was good for sixth.

The Dutchman summed up, “I think for us on this track to be that competitive to get that result is very good. Qualifying was just very tight. I think normally we are good in the race, and also this time we were good and competitive in qualifying. I think gives us a lot more hope for tomorrow.”

Soon to be six-time F1 World Champion Lewis Hamilton had something of a subdued afternoon, his best good enough for fifth place but a tad off three tenths down on the benchmark time. And ‘Hammertime’ did not happen in his second attempt either.

McLaren dominated the Best of the Rest contest with Lando Norris even ending Q2 fastest of all, the pair a providing a buffer between the Big Three and the Rest, with Carlos Sainz seventh-fastest and Norris three-tenths of a second adrift in eighth to make it an all orange fourth row on the grid for the race on Sunday.

Daniel Ricciardo was ninth in the Renault, with Toro Rosso’s Pierre Gasly rounding out the top ten.

Notably, the top six on the grid were separated by half a second, the closest it has been at the sharp end for some time. 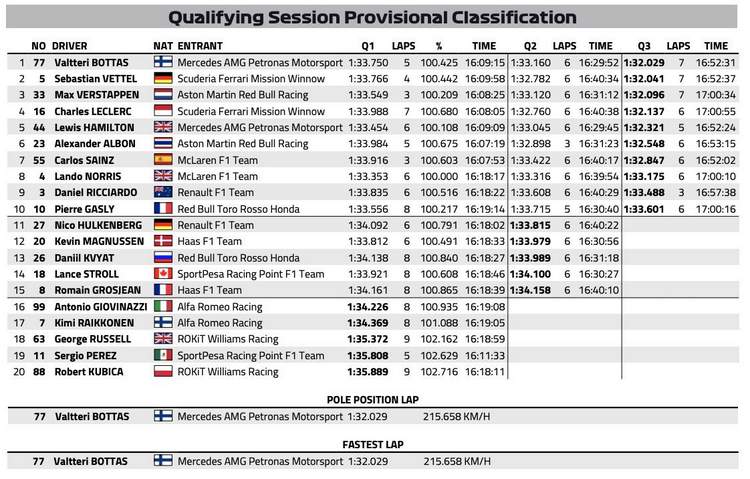