Williams: We Have Gained Significant Data 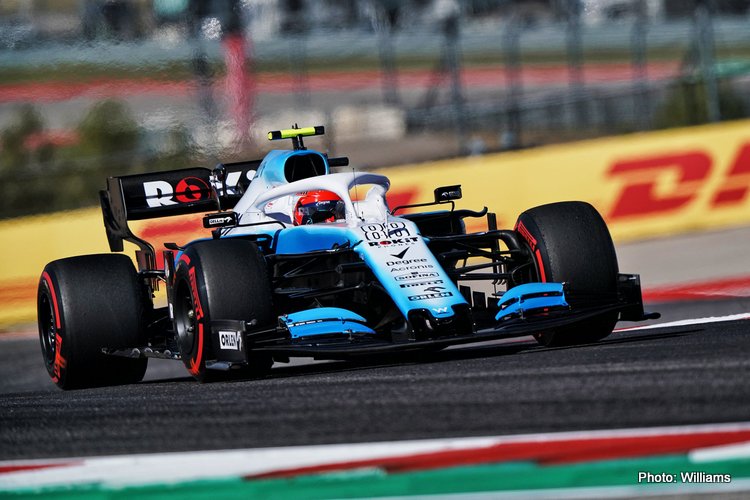 Williams report from Friday at the United States Grand Prix, round 19 of the 2019 FIA Formula One World Championship.

Dave Robson, Senior Race Engineer: With additional 2020 tyres available, and with Nicholas in the car again, we had a very busy programme planned for both of today’s sessions. Unfortunately, a gearbox issue early in FP1 heavily curtailed Nicholas’s running, and cost us several important tests. It was also a shame for him as he was looking forward to a busy session. In contrast, Robert enjoyed a trouble-free session and completed all the planned running, gaining us some valuable data both on the 2020 tyres and the setup of the car for this weekend. Throughout FP1 the track temperature remained very cold but, nonetheless, the tyres behaved quite well and we gained some useful data ahead of February’s winter testing.

Due to another impressive display from the mechanics, by this afternoon’s session George’s car had been repaired and both drivers enjoyed a trouble-free session in much warmer conditions. Having lost some of the planned experiments in FP1, and with George needing to understand the nature and bumps of the Texas circuit, we opted to revise the FP2 programme a little. Both drivers did a good job to capture everything we were after and, as a result, we have gained significant additional data on the tyres and the car.

We now concentrate our efforts on maximising the result for both drivers this weekend. We are expecting some changes to the weather tomorrow, which will impact the cars’ behaviour and we have also gathered some good data to allow us to reoptimize the cars for the circuit’s condition. With later sessions tomorrow, we look forward to some representative running in FP3, which will allow us to finalise our preparation for qualifying.

George Russell: I really enjoyed driving this circuit, it has a nice flow to it and felt very fast, although our pace was as the team predicted. Track conditions were bumpy but didn’t compromise the lap too much. It wasn’t ideal, but it added more character to the circuit and I’m looking forward to getting back out there over the weekend. On a side note, good luck to the England players in the Rugby World Cup final.

Robert Kubica: The conditions were quite extreme; the bumps are more like drops in the elevation rather than big impacts into the chassis. We focused a lot on next year’s Pirelli tyre constructions evaluating drivability and aero impacts. It was my first time at COTA and driving a Formula One car here is a great feeling. It’s one of the best new generation tracks on the Grand Prix calendar.

Nicholas Latifi: The conditions were tricky out there today, it was cool and very bumpy, so I wasn’t taking any risks. Unfortunately, I only had two push laps because of a gearbox issue. It is an amazing track to drive, even with the little laps that I did. All in all, it was very enjoyable.