Haas: Even if the Times Maybe Don’t Look Good, We Learned a Lot 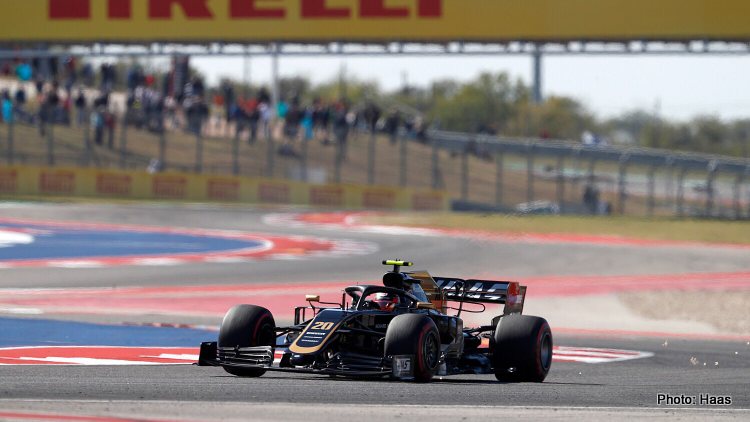 Haas report from Friday at the United States Grand Prix, round 19 of the 2019 FIA Formula One World Championship.

The 19th round of the 2019 FIA Formula One World Championship began with practice Friday at Circuit of the Americas as teams prepared for Sunday’s United States Grand Prix.

With air temperature hovering at just 8.6 degrees Celsius (47.48 degrees Fahrenheit) and track temperature at 14.1 degrees Celsius (57.38 degrees Fahrenheit) it was a frigid start to track activities in the morning. Both Haas F1 drivers started proceedings turning laps on the Pirelli P Zero Yellow medium tires before trialling two new sets each of Pirelli’s 2020 prototype Red soft rubber. Their final runs, now utilizing the standard soft compound, netted both Grosjean and Magnussen their quickest laps of the session. Grosjean posted a 1:35.356 for sixth fastest while Magnussen clocked a 1:35.659 to take 10th overall.

FP2 brought a slightly milder climate with air temperature climbing to 15.6 degrees Celsius (60.08 degrees Fahrenheit) and track temperature topping 24.9 degrees Celsius (76.82 degrees Fahrenheit). Unfortunately for Grosjean, his afternoon run-plan was brought to an abrupt halt with only four laps complete. Running off track and into the barriers while negotiating turns five and six ended the Frenchman’s session and brought the day’s solitary red flag stoppage. He had banked a 1:35.780 on a set of medium tires before the contact – placing him 18th overall. Magnussen started off on the White hard tire before switching to a set of Red softs. He logged his best time of 1:35.422 on a qualifying simulation, 17th fastest on the timesheet at the checkered.

“FP1 felt good. The car felt like it had a lot of grip, maybe that’s because I drove the NASCAR yesterday, and then jumped back in a Formula One car and thought, oh okay, I’ve got some grip now. It was a good session, I was happy with that. We made some changes for FP2 and with hindsight they were maybe a little less good. It’s tough out there, there are a lot of bumps, but it’s pretty cool also. We’ll take the positives from FP1. We obviously haven’t had the chance to do a race sim, but we’ll take whatever Kevin (Magnussen) has done and just apply it to our car.”

“FP1 was decent. We knew we had a big program of test stuff in FP2, so we tried to go straight into FP1 – we didn’t do an install lap, we didn’t do a turnaround, we just got straight into running. We wanted to get some car balance info from FP1. Then in FP2 we did all this aero testing, it was to get correlation, and obviously to try and understand a little more about the aero. So, we’re not concerned about the times, we saw how FP1 went, we didn’t go low fuel and stuff like that. That’s more representative of our pace, we’re probably just outside the top ten. It would be nice to find more, and actually be in the top ten, it’s very tight so we’ll just have to try and nail it tomorrow.”

“It was a very busy day today. FP1 went to plan, everything seemed to be fine. Then in FP2 we had planned a lot of testing, especially with Kevin (Magnussen). We achieved all our results there, even if the times maybe don’t look good, we learned a lot. We now have a lot of data to look through. Unfortunately, Romain (Grosjean) had a crash on his second fast lap, so he couldn’t do anymore driving. We’ll have the car fixed for tomorrow. We’ll be back on track and we’ll see what we can do.”