Ferrari: In Race Trim We Have a Bit More To Do 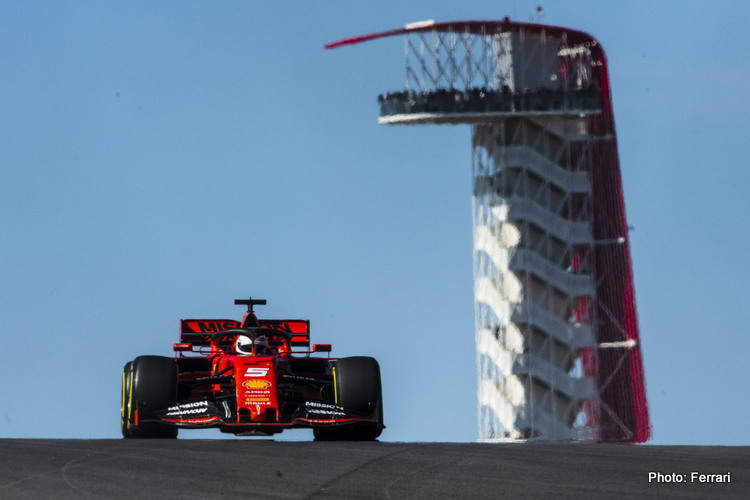 Ferrari report from Friday at the United States Grand Prix, round 19 of the 2019 FIA Formula One World Championship.

Austin, 1 November 2019 – On a Friday when all the teams had to deal with a very bumpy track surface, Charles Leclerc and Sebastian Vettel were second and fourth fastest overall in free practice for the United States Grand Prix, setting their best times in the second session, by which time the track had rubbered-in and when the temperatures had risen compared to the 10 degrees air and 17 on track in the morning, which was more like the conditions seen in winter testing.

FP1. At the start of the first 90 minutes, the Scuderia Ferrari Mission Winnow drivers took to the track with the 2020 test tyres supplied to all teams by Pirelli. Sebastian had a trouble free time, but Charles had a throttle pedal problem, after hitting a bump in the track surface quite hard. It meant he lost around 30 minutes of track time while it was repaired. After that, Leclerc did one run on the 2020 test tyres, before switching to the Softs, which both drivers used to set their best times: Vettel a 1’34”226 and Leclerc a 1’34”126. However, the Monegasque’s time was deleted by the Race Direction as he was deemed not to have respected the track limits so his best time stood at 1’35”380 set on the 2020 test tyres.

FP2. In the afternoon session, Leclerc and Vettel began in qualifying trim, setting their best time of the day: Leclerc 1’33”533 and Vettel a 1’33”890. Then in the second half of the session, the cars ran in race configuration, carrying out the usual long runs and an evaluation of the different tyre compounds. Seb ran the Hard and Soft compounds, while Charles was on the Medium and Soft ones. As mentioned earlier, drivers had to deal with a very bumpy track surface, slightly worse than last year, so the teams had to adjust to this, advising the drivers how to tackle the braking and gear change points.

Charles Leclerc: “Overall, I think it was a positive day. Despite the setback I had in FP1, where my fastest lap was deleted and I had an issue with the throttle, the car felt good, especially in the qualifying runs. The track was bumpy, something that is a bit unusual in Formula 1, but we will adapt to it over the weekend.
We still have some work to do to improve our race pace and our competitors have turned out to be quite strong in that department today, so we will see where we stand tomorrow and take it from there.”

Sebastian Vettel: “It is always good fun here in Austin. The track is not in the best shape because of its bumps. But it is what it is and that makes it a bit special and more tricky for us. But I don’t think they can do anything to fix it now.
The car was good to start with, which is positive, but then we tried some things that did not seem to work so well. But we understand what we need to do so, hopefully for tomorrow we can improve in terms of our one lap pace. But I think that in race trim we have a bit more to do.
We know our strengths and weaknesses and in quali trim, we can mask the weaknesses a bit, whereas that is harder for us to do in race configuration. All the same, I’m quite confident we can improve the car. We will focus on that and see what we can achieve.”