Vettel: Aim is to win every race until the end of the season 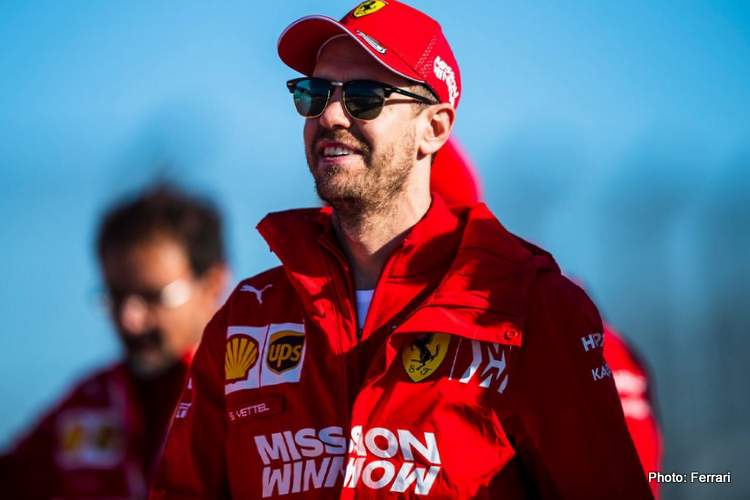 As winter embeds in Europe it was also apparent that it was still hanging about in Texas, in cold conditions as the Formula 1 circus set up tent in Austin for the United States Grand Prix weekend, Round 19 of the 2019 World Championship, at Circuit of the Americas (COTA).

Ferrari report that Thursday in Austin was freezing cold with a bitter wind blowing so that when Sebastian Vettel and Charles Leclerc got ready for the usual track walk in preparation for the United States Grand Prix here in Texas, they looked as though they were off for a day’s skiing.

Before strolling around the 5.513 kilometres of the Circuit of the Americas and the initial briefings, the Scuderia Ferrari Mission Winnow drivers met up with the media.

First up in front of the microphones was Sebastian, who began by looking back at recent races.

“I see the glass as half full because there’s no doubt that our car has made a definite step forward in terms of its competitiveness,” affirmed Vettel.

“We have shown that we are very quick in qualifying, we are at the same level or just a little bit behind our main competitors and this means that, unless everything goes perfectly, it’s hard to stay in front.

“In Russia, if my car had not had a problem, we’d have probably finished first and second. We all know what happened on the first lap in Japan, while in Mexico, Lewis had a better pace and I don’t think it had anything to do with the strategy.”

Questions then turned to the remaining races.

“It’s never easy to make a judgement before going out on track, but we have shown that we can be competitive on every sort of track. The aim, therefore, can only be to try and win every race from now to the end of the season,” added the German

It was Charles’ turn next and he began by telling the journalists what he had been up to since arriving in the United States.

“On Monday I went to a typical American barbecue and also watched an NBA basketball game. Then on Tuesday I did a bit of shopping and visited an amusement park. But I always found time for a training session and I can’t wait to get on track.”

“As I’ve already said, that’s not quite the case, because the interests of the team always come first. I want to do this just for myself. Last year I was fighting for twelfth place, this year I can aim to finish in the top three in my first year with Ferrari and so it’s normal that I like the idea”.

It will take three good races from the Monegasque for him to achieve his goal.

“I think our car is good enough for us to think big, so we are ready to give it our best shot, also learning from our recent experience in the Mexican Grand Prix. The Circuit of the Americas features fast corners and long straights, which should suit the SF90 well. The track is very nice and let’s hope we can have some fun” concluded Leclerc.