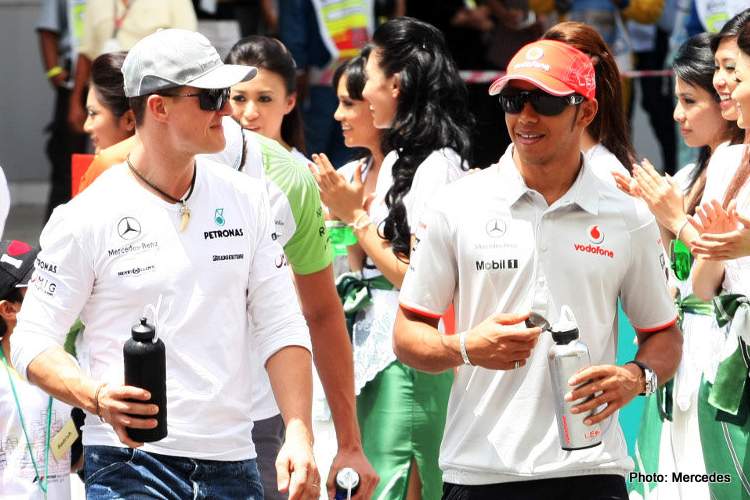 Mercedes team boss Toto Wolff can see Lewis Hamilton going on to smash Michael Schumacher’s greatest Formula 1 records, the win and title milestones once considered sure to stand the test of time, in years to come.

The 34-year-old Briton is set to seal his sixth world championship — one short of Schumacher’s seven — at the U.S. Grand Prix in Texas on Sunday. Another race victory would leave him only seven short of the great German’s 91.

“I think he’s going to race as long as he feels he enjoys it and that he is competitive enough,” Wolff told Reuters when asked whether he felt Hamilton might race into his 40s like Schumacher.

“There is an age factor, that isn’t kicking in and that hasn’t happened (yet). Kimi (Raikkonen, the 2007 world champion for Ferrari and now with Alfa Romeo) has had his 40th birthday so why not?”

“In between we need to continue to deliver a good enough car. If we do that, then yes he could shatter (Schumacher’s records),” added the Austrian, whose team have been pushed hard by Ferrari this season.

Schumacher, who won five titles in a row for Ferrari between 2000 and 2004, retired in 2012 at the age of 43. Hamilton, now on 83 victories, has maintained an average of 10 wins a season for the past six years with the dominant team of the sport’s V6 turbo hybrid era.

“I think it’s exciting. It’s an exciting potential new target,” Wolff said of the prospect of chasing Schumacher’s tally. “Of course the pressure will increase but if he would not be able to cope with pressure, he wouldn’t be a five or six times world champion.”

Formula One is set for a major rules overhaul from 2021, with technical and financial changes aimed at creating a more level playing field among teams and to make it easier for drivers to overtake.

Mercedes have already won this year’s constructors’ championship and are sure of completing an unprecedented sixth title double in succession.

Wolff said Mercedes, who have one of the biggest budgets and are set to provide engines to four of the 10 teams in 2021, relished the opportunity 2021 represented.

In 2009, the Brawn GP team won both titles with a ‘double diffuser’ concept that wrong-footed rivals and left them rushing to catch up.

Mercedes promptly bought the team and returned as a manufacturer in 2010. The V6 turbo era started in 2014, with the Mercedes engine immediately proving a cut above the rest.

Wolff said the will to win was as strong as ever, and referred to a comment made by the New Zealand coach ahead of the All Blacks’ Rugby World Cup semi-final defeat to England in Japan.

“Put in very simple words, he was asked whether there was a risk of losing against England and he said: ‘You’ve got to be careful of the hungry animal, because if the animal is hungry it’s going to eat you’.

“We are very aware of the hunger and ambition of other teams,” said Wolff. “Every single person in this team is hungry. It hasn’t changed.”

Hamilton has well-documented interests outside Formula One, in music and fashion, and is outspoken on environmental issues that have attracted criticism because of his jet-setting lifestyle in a fuel-burning sport.

Wolff hailed the Briton as “one of the greatest racing drivers that ever existed” and made clear that he could count on full support.

“I think that having a message that goes beyond racing is important. I find it positive for him to utilise his impact and his audiences to transmit another message and that is around environment. That is praiseworthy,” he said.

The Austrian saw more criticism coming from Britain than elsewhere, for reasons he could not fully understand, but added that “criticism can be quite a force” for motivation.

He also saw parallels with Schumacher’s career for how Hamilton might be seen in future, “It is a funny thing with extraordinary achievements that they are recognised and praised much more once a career has ended.”

“Michael, while in the middle of his career, polarised a lot. There was a lot of criticism. Today there is not one person who doesn’t speak about him as the greatest of all time. At the moment he is still leading the table.”