#TheXtraLap: Hamilton wins in Mexico but no title yet 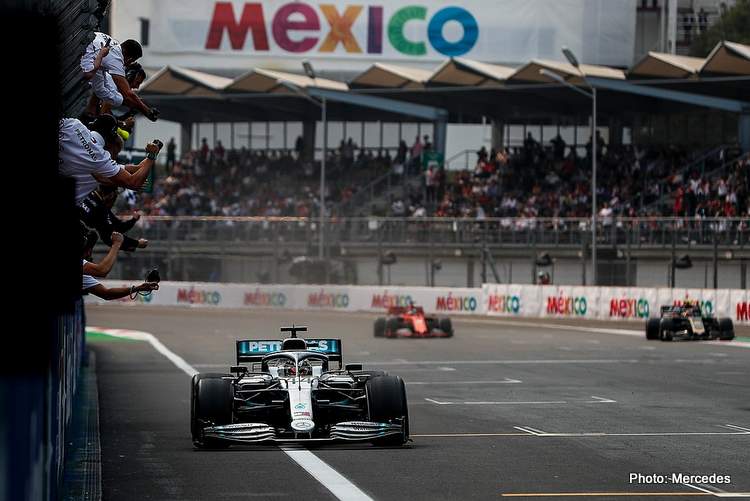 When the weekend started, all eyes were on Ferrari as they have the highest straight-line speed as Mercedes struggled and Red Bull was there or thereabout with Max Verstappen.

The surprise came on Saturday when Verstappen took pole BUT lost it as he didn’t lift when Valtteri Bottas crashed at the final corner and yellow flags were waved. At first, FIA didn’t punish Verstappen as the mini-sectors showed he “lifted” and went 1km/h slower than his previous lap.

During the press conference though, Verstappen dug himself a hole when he answered a question about that yellow flag situation, with that he did see the yellow but just didn’t lift. This didn’t go down well and Verstappen was summoned to the stewards after he received a 3 place grid drop and 2 penalty points on his licence.

If he would have lifted, as he should, his previous lap-time would also have been enough for pole so why he did what he did remains a mystery. Anyhow, Charles Leclerc was gifted pole-position with Sebastian Vettel next to him in 2nd. Lewis Hamilton started from 3rd, Verstappen 4th, Red Bull driver Alexander Albon in 5th and Bottas in 6th.

It was a race with ups and downs but in the end, Hamilton didn’t clinch the world-championship yet and Verstappen got a puncture to drop to P20, just to fight his way back to P6. Ferrari split their strategy with Vettel on a 1 stop and Leclerc on a 2 stop. A 1 stop strategy turned out to be the best one but Ferrari left it too late as Hamilton was already in front with Bottas working his way up to 3rd.

With Vettel in 2nd and Leclerc in 4th when they crossed the finish, both Red Bull cars followed suit with Albon in 5th and Verstappen in 6th. Sergio Perez was best of the rest in front of his home crowd and Daniel Ricciardo made the best of a bad qualifying by finishing 8th.

Pierre Gasly finished 9th with Nico Hulkenberg getting the final point in 10th after being pushed in the wall by Daniil Kvyat on the final lap. Kvyat got penalized and Hulkenberg got his point for 10 place finisher.

How they crossed the line at Autodromo Hermanos Rodriquez#MexicoGP #F1 pic.twitter.com/3ekrhmTwyu

Was it a wrong strategy for Ferrari?

I have a feeling that Ferrari split their strategy so they had options after lap 1 as Leclerc started from pole, but with Vettel in 2nd able to get a tow, things could change after lap 1 and then it could become an interesting race.

It was a great idea, knowing that Mercedes wasn’t on the pace up till the race and having a charging Verstappen wasn’t a big issue as it seemed Ferrari’s focus was more on Mercedes.

I don’t think they thought the race pace of themselves, Mercedes and Red Bull were that simular so a 2-stop would be slower anyhow as long as there wouldn’t be a safetycar.

Still, in my opinion, Ferrari sets out a strategy plan A, B, C or whatever and they stick to it no matter what. Leclerc does what he has been instructed and only Vettel is being vocal if he thinks that there needs to be changes made.

And so it happened. Leclerc did what was discussed and did a 2 stop and went from P1 to P4 at the finish while Vettel tried to do a longer stint and stick to a 1 stopper which meant he kept his position of 2nd.

Was Mercedes really that dominant in Mexico?

I have to say no. They lacked straight-line speed and in the twisty technical part of the circuit, they lost out aswell.

Bottas his race was a bit compromised after he crashed in qualifying and his car was only fully rebuilt moments before the race.

He did, however, fought tooth and nail to get up the order and with finishing 3rd, got praise from the team.
Hamilton had a tough start and by sticking next to Vettel, even though he was forced onto the grass, made that he had a slightly better track position than a storming Verstappen.

There was a bit of contact but the situation didn’t change for Hamilton and he was able to stay with the Ferrari cars.

Even with a slightly damaged floor, he set good lap times and by pitting early for the hard tyre (even though Hamilton questioned that decision a few times) it meant that after all pitstops, he found himself in the lead and never looked back.

I would say, thanks to the Ferrari strategy that didn’t work, Mercedes was able to make the most of it to finish 1-3.

Did Red Bull throw it away?

I think Verstappen threw away his pole by keeping his foot down under yellow flag conditions and that should’ve never happened and he got rightfully punished for it.

Starting from 4th wasn’t the end of the world with enough to play for but his contact with Bottas his frontwing endplate, which caused a puncture, threw away any change of a win or podium when Verstappen had to limp to the pits with a full lap to go.

He came back out in 20th position and most thought that was it.

What Verstappen did next impressed me the most. He did a stint on the hard tyres that lasted a total of 66 laps and in the process battled his way from 20th to 6th at the finish. Great race with a bad result.

Verstappen was voted “Driver of the Day” which showed the overall thoughts of fans.

Then we had Albon who started 5th but found himself in a podium position for a large part of the race.
He managed to do the same lap times as the ones in front. Like Leclerc, he was also on a 2 stop strategy, which meant that, at the end, he dropped a few places to finish P5 but he did a strong and solid race.

My vote goes to both Sergio Perez and Daniel Ricciardo, who had a great battle for most of the final part of the race.

As Perez said in an interview, to come home in 7th, at your home Grand Prix, feels like a victory. Perez did a 1 stop.

Ricciardo also did a 1 stop but did his first stint on the hard tyre and managed to get 50 laps out of them. He did the opposite of Perez, who did 51 laps on the hard tyre on his second stint.

Both drivers proved once again that a 1 stop strategy was the best as Perez started from 11th to finish 7th as Ricciardo, who started 13th, finished 8th.

We leave @mexicogp with points, and a brilliant home race result for @SChecoPerez

“ It’s been a tough week for the team, so I’m proud of them and how they’ve kept their spirits high.”
Daniel Ricciardo – #MexicoGP, Sunday
Full report https://t.co/hZhVDWjTBI#RSspirit pic.twitter.com/PMR2Q8lVOy

Sad to say, it was McLaren. After a great start by both Carlos Sainz (7th) and Lando Norris (8th) it went downhill when the race progressed.

For Norris, the race was over after his 1st pitstop when the team released the car but the left front mechanic wasn’t sure if he attached the wheel properly so the team told Norris to stop and the team had to push him back to doublecheck.

There was a reviewing by the stewards but since it couldn’t be established if the wheel was actually not attached properly, no further action was taken.

Norris sent out again but with no chance of points whatsoever, he was called to box to retire, which gives the team a free pass to use a new gearbox without getting a penalty.

Meanwhile, Sainz did a solid race but at one point found himself going backwards when he started to struggle with the tyres. Having also done 2 stops (the slower strategy), he ended up 13th at the finish.

“Let’s reset, learn from the issues we were facing today and come back stronger.”

Anything else worth mentioning?

Yes. From the start of the season, Williams have been the team that lost out big time and for a number of races, Haas has joined them but as of late, even Alfa Romeo joined that list as the Italian/Swiss team can’t seem to find their wat back up.

After a great start of the season, both drivers tend to struggle more and more to keep the tyres alive and set a decent pace to give them some points at the end of the race.

Also in Mexico, they dropped out of the points with Antonio Giovinazzi finishing down in 14th after a dreadful pitstop while his teammate Kimi Raikkonen DNF’d, due to floor and cooling damage.

Antonio “My start wasn’t too bad and in the opening phases I was racing with the Renaults and Racing Points, but the pit-stop issue cost us a lot of time. We will need to work hard to get back in time for next week, in Austin.”

What stood out on social media?

What was expected, the penalty for Verstappen but also the sudden chance of rain towards the end of the race? The rain that never came during the race but fell down hard when teams started to pack up.
There was also some back and forth on the possibility of Bottas getting a grid-penalty or pitlane start after his crash during Q3 but the Mercedes team did a miracle and fixed the car without having to take any penalty.

Next to this, there was a lot of praise for the Toro Rosso team, who qualified really well and also did a strong race up till the end, when Kvyat tried a move on Hulkenberg that didn’t stick and in doing so, received a penalty

“We knew it was going to be difficult today with our starting compound, but we still had high hopes to get some points. I think the race was very strong given the circumstances. In a way we kind of compromised our race with our good Qualifying.”

Since all seasons are coming to an end or are already finished, there’s less and less racing each weekend.
This weekend, F1 will head to Austin Texas for the USGP while the 2-wheel action from the boys in MotoGP go to the Sepang International Circuit in Malaysia.
All timetables and a little “extra” are already found on the MsportXtra website.

#RACEWEEK !!!! 😉 With @F1 at @COTA for the #USGP and @MotoGP at @sepangcircuit for the #MalaysianGP . All timetables and more are updated on https://t.co/vM4tpkVs2s so make sure to bookmark it. #MsportXtra #F1 #MotoGP pic.twitter.com/HfXtrfiSDe