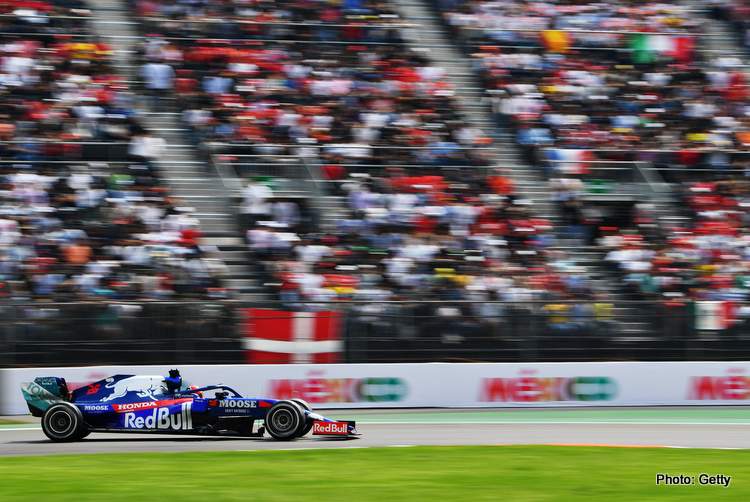 Toro Rosso report from Sunday at the Mexican Grand Prix, round 18 of the 2019 FIA Formula One World Championship.

Pierre Gasly (STR14-04, Car 10)
Race: Pos. 9th
“It wasn’t easy at all inside of the cockpit, but today I gave everything and I’m happy with scoring two points. Overall the car has been competitive all weekend, which was positive. Starting the race on the Option tyre clearly wasn’t ideal, but we tried to make the best out of it. In the end we managed to make it work which was important for our battle in the Championship.”

Daniil Kvyat (STR14-03, Car 26)
Race: Pos. 11th
“We knew it was going to be difficult today with our starting compound, but we still had high hopes to get some points. I think the race was very strong given the circumstances. In a way we kind of compromised our race with our good Qualifying. I’m quite upset with the penalty I received because as a racing driver, I disagree with it because we are told we are allowed to race. Nico was defending and I was attacking and these things happen, especially on the last corner of the last lap. Despite this, I feel very strong after this weekend; Friday, Qualifying, and the race were all strong for me, so I’m looking forward to getting back on track next week in Austin.”

Guillaume Dezoteux (Head of Vehicle Performance):
“We had a tough race today in Mexico. Having to start on the soft tyres definitely compromised our race as we had to stop earlier than the other midfield runners to try and make the two-stop strategy work. Daniil drove a strong race and he was showing good pace in the middle stint on the hard tyres. After his last stop, he was catching Stroll in front but couldn’t pass immediately and had to let by a long train of leading cars. The time lost with the blue flags meant he could only catch Hulkenberg on the very last laps. The move on the last corner was a bit ambitious and unfortunately Daniil had a 10s penalty for causing a collision. Pierre had a very similar strategy as he too started on the soft tyre. He lost more time in traffic, especially behind Sainz who was struggling a lot on the hard compound. The second half of the race was competitive as he ran most of the time in free air and he was able to pass Stroll and get closer to Daniil and Hulkenberg. The collision in the last corner allowed him to finish P9.

Toyoharu Tanabe (Honda F1 Technical Director):
It was a disappointing race in that we were unable to convert the speed we had shown all weekend into a better result. The Toro Rosso drivers, after showing good pace all weekend,  had a frustrating race, possibly handicapped by having to start on the used Softs from qualifying. But at least Gasly’s two points are useful for the fight for fifth place in the Constructors’ classification. There are only three more races to go and we want to make the most of every opportunity, starting in Austin in a few days’ time.