The Day After: Another Hamilton Heist 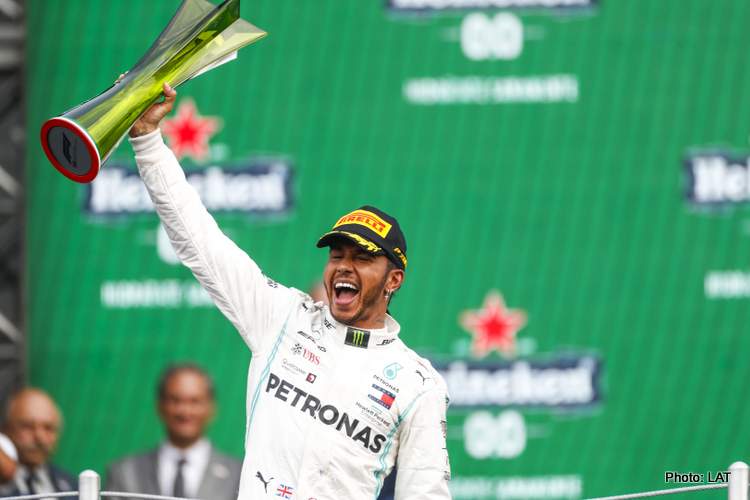 A story that seemingly gets more familiar with each passing race, Lewis Hamilton once again snatched an unlikely victory of the Ferraris on Sunday in Mexico.

To quote renowned philosopher and poet DJ Khaled: “another one”.

Really, that about sums up the story of Sunday’s Mexican GP, with Ferrari once again blowing an advantage, and Mercedes (via Lewis Hamilton) there to pick up the pieces.

No, it wasn’t quite on the level of Suzuka or Sochi but the fact remains that the Scuderia started the race with two cars in front, were able to split strategies, and still couldn’t take the victory.

Even if this doesn’t rank high on the list of gut-punch losses Ferrari have sustained this season, I think it’s still a pretty remarkable one. Even if Charles Leclerc’s two-stopper was always the wrong strat to be on, the fact that they allowed Hamilton to undercut Vettel so significantly (14 laps!)… both on one-stops… on a tyre with reportedly 50-laps of life… and at a track where it is hard to pass in equal machinery seems downright foolish.

Then again, maybe that’s a little harsh, and Hamilton is just that good – or maybe the secret to making an ambitious strategy work is to complain about it? He’s certainly a master of that!

In any case, Mercedes have a another win they probably shouldn’t, and the inevitable conclusion to the 2019 Driver’s Championship has gotten a lot closer. Lewis Hamilton is going to take it, and at least in some small part, he’s got Ferrari to thank for it.

Unsurprising to see the firestorm that’s popped-up around Hamilton’s comments about Max Verstappen after their early clash on Sunday. On one hand, there’s no denying Verstappen has developed a reputation as being particularly stubborn when racing wheel-to-wheel, but it’s not like Hamilton has always kept things clean either. On a related note, seeing the floor damage Hamilton sustained in that incident afterwards only makes his drive even more impressive.

Not quite sure how Daniil Kvyat could be that upset with the stewards for his 10-second penalty after spinning-out Nico Hulkenberg on the final lap. Never got his car alongside Hulkenberg’s, and just seemed to forget where his front wing was. Still, it was amusing to see Toro Rosso gain points as teammate Pierre Gasly moved-up to P9 – I bet that doesn’t happen too often!

Another great crowd in Mexico, with over 345,000 spectators flooding in over the weekend. I’m sure there’s some financial reason, but I don’t understand why the FIA doesn’t put Abu Dhabi as part of the Asian Swing, move Brazil up, have CoTA then Mexico and give the season finale the atmosphere it deserves.

Asked to deliver an almighty drive in front of his home fans, Perez did exactly that, managing to hold-off a charging Daniel Ricciardo on 51-lap-old hards to the Australian’s 20-lap-old mediums.

Worst of the Day: McLaren

They may have solidified themselves as the ‘best of the rest’ on the F1 grid, but Sunday was a day to forget for McLaren. Squandering great starts from both drivers, Carlos Sainz simply had no pace on the hard tyre, while a pit-stop gone awry doomed Lando Norris. On the bright side, they’re still 38 points ahead of Renault in the constructor’s standings.

“I think every driver is slightly different… Some are smarter. Some are very smart, aggressive and some are silly with it.

“Through those experiences of racing with people, you give some more space. And others you don’t have to, they’re quite respectful.

“But yeah, Max. It’s very likely you’re going to come together with Max if you don’t give him extra space. So most of the time you do.” – Lewis Hamilton, stirring the pot on Max Verstappen.