Renault: It Could Have Been a Bit Better 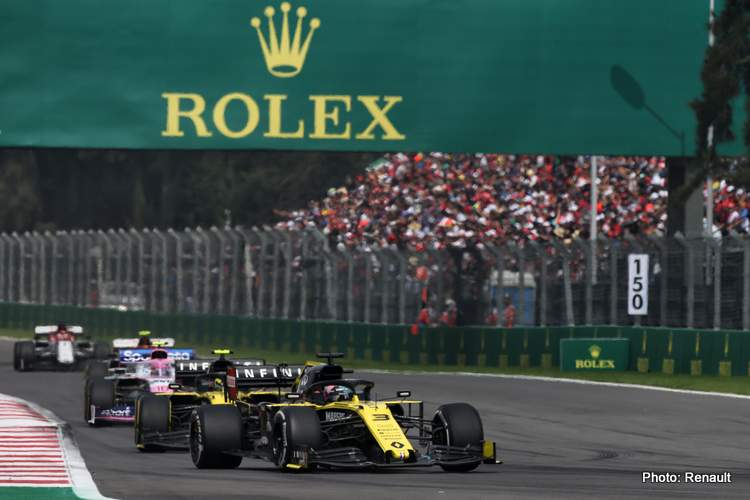 Renault report from Sunday at the Mexican Grand Prix, round 18 of the 2019 FIA Formula One World Championship.

Daniel leapt from thirteenth on the grid to collect four points, narrowly missing out on seventh place after a thrilling closing stage duel. The Australian made a quick start, passing Nico on lap one, before making his Hard tyres last an impressive 50 laps, which set him up well to claim a comfortable eighth.

Nico looked set to finish behind Daniel in ninth but a final corner incident with Daniil Kvyat meant he limped home in eleventh with a damaged rear wing. Kvyat received a 10-second penalty for his involvement, promoting Nico to tenth.

Nico Hülkenberg, started P12, finished P10
“We definitely wanted more today, so it’s frustrating to only pick up one point. We perhaps were a little bit too keen to pit early. In the latter stages of the race I was struggling with the car a bit, trying to get in a rhythm. There’s not much to say about the final corner incident. We were running in ninth, but I had no grip, I was pushed by Daniil [Kvyat] and it doesn’t take much to spin. It was a shame as it cost us an extra point.”

Daniel Ricciardo, started P13, finished P8
“It’s good to be in the points. I could have got more if I had passed Perez but I just couldn’t make it stick. I sent it into turn one, maybe a little late and the postman wasn’t there! We made a really strong start on the Hard tyre and that set us up for the rest of the race. It’s a solid day with both cars back in the points. It’s been a tough week for the team, so I’m proud of them and how they’ve kept their spirits high. We regrouped quickly and we can be pleased with that, but now we have to move on and keep it up.”

Cyril Abiteboul, Team Principal:
“Every weekend, it feels like the circumstances vary but the script remains the same: poor qualifying that we turn around during the race thanks to aggressive strategic choices and solid execution. Today was another example, with also the benefit of the free tyre choice at the start. It could have been a bit better with Daniel racing cleanly against Perez on one side, and Kvyat much dirtier against Nico and helping Gasly on the other side. That’s racing, but I prefer that we focus on ourselves. The drivers did a remarkable job to get the best from the circumstances in qualifying and then make the tyres last in the race. The garage crew also did a phenomenal job to deal with the problems on Saturday morning. We must get rid of everything that undermines our potential or offers easy opportunities on-track or off-track to our fierce competitors.”