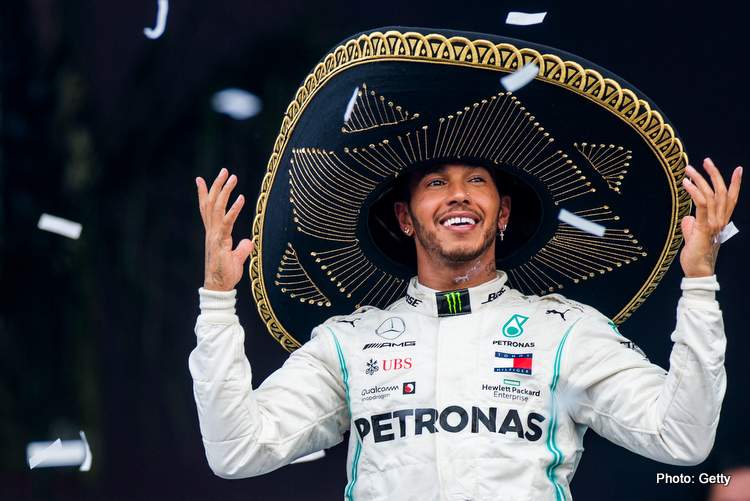 Lewis Hamilton scored Mercedes’ 100th Formula 1 victory as he took a step closer to a sixth World Championship delivered a controlled, albeit unexpected win, as Ferrari once again fumbled a winning chance.

The Briton scored his 83rd Grand Prix win in a race which promised much and indeed started frantically but then petered out into a stalemate with very little racing happening on the day.

The only heart-stopping moment he had was when he went wheel-to-wheel with Red Bull’s Max Verstappen through Turn 1  and into the Turn 2 esses complex on the opening lap, he was lucky not to damage a wing or suffer a puncture.

Speaking to the colourful and jolly crowd in the baseball arena, Hamilton said, “Firstly we’re going to applaud this incredible crowd – this is the best crowd we’ve ever seen. Today is an incredible result. I have to say a huge thanks to my team – the guys continue to work incredibly hard and stay focused.

“We came here on the back-foot and we pulled through we had a quite a bit of damage and the race was a struggle. I kept my head down and it felt like a long second stint.”

“I love racing and I take it one race at a time and this is a race I’ve wanted to win for some time and it’s been a bit tricky for us and today opportunity and the car holding together as it did and the team executing their best strategy.”

Nevertheless, it was an intriguing contest as Ferrari once again messed up a possible victory despite hogging the front row and Charles Leclerc leading teammate Sebastian Vettel until lap twelve everything going to plan.

But then they fumbled Leclerc’s pitstop, costing the Monegasque five seconds which yet again turned a sure win into fourth place. Vettel crossed the line in second place, 1.7 seconds adrift of the winner, and Leclerc fourth. Another epic fail by the Scuderia.

Credit to Leclerc who chased gamely but took a while to start closing the gap and when he did he got close to Bottas, but despite the Ferrari horses could not snatch third from the Mercedes driver.

With Hamilton moaning on the radio about the condition of the hard tyres, perhaps the boys in Red felt the rubber on the Mercedes would fall off the cliff, but they were wrong as they added another chapter to their evergrowing book: How to turn sure victory into defeat!

Vettel summed up his afternoon, “Surprisingly the hard tyres worked very well. It was a very intense race as I had no break. I had Valtteri [Bottas] behind me giving me some pressure in the final stint before I could focus on Lewis.

“Lewis was just cruising for most of the second stint up to the point where the pack was arriving, and then I guess he had enough tyres left. I’m happy because it was a good race, but here and maybe with strategy we could have been a bit sharper.”

Bottas kept the championship alive by claiming the final spot on the podium. During different stages in the race the Finn looked good for second place and other times might have been fourth.

He told reporters afterwards, “I enjoyed it considering yesterday [crash]… it was a good result and I’m happy. The start was tricky, I dropped a place, but looking at that it’s pretty good. I’m feeling good definitely a lot better than the same time last season, but I have the pace and the confidence and just need to continue and I look forward to next weekend.”

Red Bull rookie Alex Albon gave another solid performance to finish fifth albeit 21 seconds down on the fourth-place man with teammate Max Verstappen in sixth.

The Dutchman inexplicably won the Driver of the Day (which immediately puts the accolade into question) as he again showed why he is his own worst enemy.

After the brainless admission after qualifying that he deliberately ignored the yellow flag, and got away with a slap on the wrist by the FIA instead of a red card, namely immediate one-race ban or at least sent to the back of the grid.

Then he went one worse as old “Mad Max” went on the rampage, clattering into Hamilton through the Esses and then suffering a puncture in the heat of battle with Bottas, rubbing wheels caused a puncture on the blue car that forced him to pit early.

Granted he found his head, doing what is expected of Verstappen and powered through the field, but hardly the drive of the day.

In Formula 1.5, the master of races of attrition – local hero Sergio Perez – brought the Force India home in seventh to be Best of the Rest on an afternoon in which the gulf between the Top Three and the others was particularly embarrassing. The gap 75-seconds down on the race winner.

The Australian was lucky not to DNF after surviving a torpedo from Toro Rosso’ Daniil Kvyat on the final lap.

It was a harsh day for McLaren after a qualifying that promised so much they went on to endure one of their worst races of the season, with Lando Norris being sent out with a loose wheel which compromised his race and forced the team to retire the car, while Carlos Sainz spent his 71 laps sliding down the order to 13th.

In closing, ignoring the farcical driver of the day as voted by ‘fans’ the real Driver of the Day was Hamilton who once again, without the best car, managed to win a race which was not his to win.

His former teammate turned super-slick pundit, Jenson Button said of the win, “What a drive, for me that was one of his best drives. We know Lewis as the aggressive driver, fighting for that victory. This was a really different victory, looking after the tyres, looking after the car and getting the job done.”

Congratulations @LewisHamilton and all @MercedesAMGF1 team for this 100th victory in @F1
Austin should be a great celebration…#F1 #MexicoGP 🇲🇽 pic.twitter.com/iTDKua8JPh 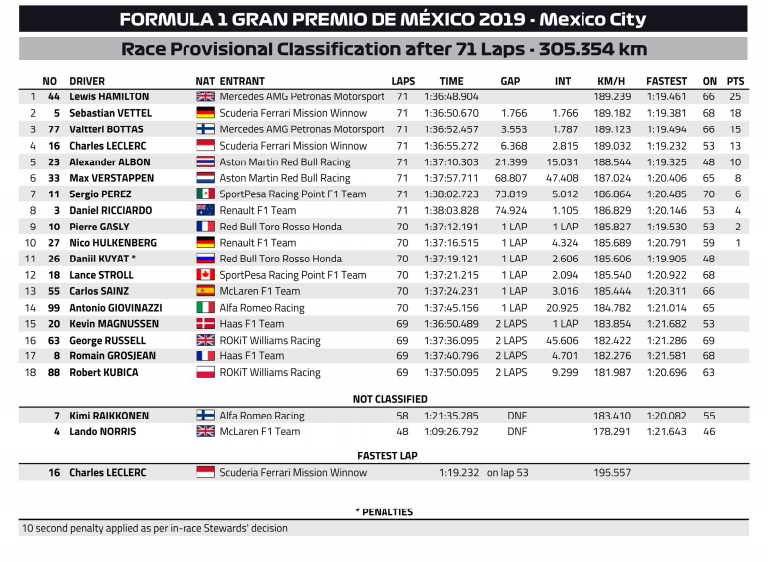