Mercedes: Today Was An Unexpected Win 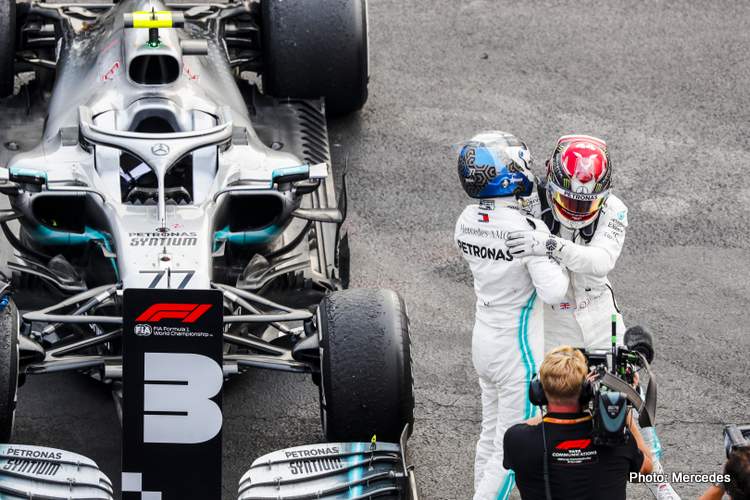 Mercedes reports from Sunday at the Mexican Grand Prix, round 18 of the 2019 FIA Formula One World Championship.

Lewis Hamilton
Today was a surprise, we’ve really struggled here for quite some time and we came into this weekend expecting it to be very difficult. We really thought we would be on the back foot, but we kept our heads down, we kept working hard and it all came together in the end. I had a crazy first couple of corners today, I was pushed on the grass at the start and then Max hit me. It was not easy to recover from that afterwards – I had a massive chunk of my floor missing, so the rear end was moving a lot and I had to really change the dynamic of how I was driving. I don’t know how I managed to keep it going, but I did. The guys also did a fantastic job with the strategy – we stopped pretty early, and honestly I thought it might have been too early, but it all worked out in the end. I really wanted to deliver for the fans today; they were all out there during the drivers’ parade supporting me, so I really wanted to give them a good performance and I’m so grateful we won.

Valtteri Bottas
Today was a very good day, especially considering the circumstances – the shape of my car after the crash yesterday and the fact that I started P6. I had a difficult start, but after that I had a very strong race. I looked after the tyres and managed to extend the first stint quite a bit, which opened up a few opportunities. I was trying to put some pressure on Sebastian, but ultimately, I don’t think the margin between him and me was enough to overtake. We maximised our result and the entire team delivered today – from the mechanics fixing my car to the strategists coming up with a great plan for the race -everyone did a really good job. Yesterday, both Red Bull and Ferrari had the upper hand, but we’ve really been strong on Sundays this year and ultimately that’s the day that matters. We secured the Constructors’ Championship in the last race, but today’s result shows that this team is still hungry and I’m really happy that all the hard work from everyone in Brackley and Brixworth paid off today.

Toto Wolff
You could say today was an unexpected win. In recent years the conditions here in Mexico haven’t suited our car but I am glad it came together today. We knew that we had to take some risks in order to win – so that’s what we did it and it worked out. Lewis did an incredible job out there today, especially with tyre management. It’s about finding the right balance between the aggressiveness you need to have, particularly on the outlap in order to undercut, but then equally you need to be able to switch off and manage the tyres to the end. This is where communication between the driver and the engineers is very important. It was also a monumental effort from the guys in the garage to put Valtteri’s car back together after the state it was in after qualifying, so a very well done to them. It was a strong race from Valtteri as well and I’m happy to see how confident he is when he races, actually pushing Lewis hard. They are really benefitting from each other, they look at each other’s data and both of them have really grown with the team.

Andrew Shovlin
This was the scene of our worst race last year; we were bottom of the class on tyre management and the power unit was struggling with the altitude. It’s so nice to come back here and win one year later as a lot of work has gone into understanding why we were weak in both of those areas and making sure we didn’t repeat the same mistakes twice. We didn’t really know what to expect in the race as we’d made a lot of changes to the car after Friday night and the first stint was going to tell us whether we’d gone in the right direction. The warmer track seemed to help the tyres today and we could see early on that the degradation was low which brought the one stop back onto the table. Both drivers did a brilliant job managing the tyres and both had really good pace in the race. We couldn’t follow closely as we were running hot on most things so the overtaking had to be done on strategy but the one stop worked well and to walk away with a first and third from where we started is extremely satisfying. It was great fun racing today and we are looking forward to Austin where we expect that to be another tough fight.