Haas: There Just Wasn’t More Performance in the Car 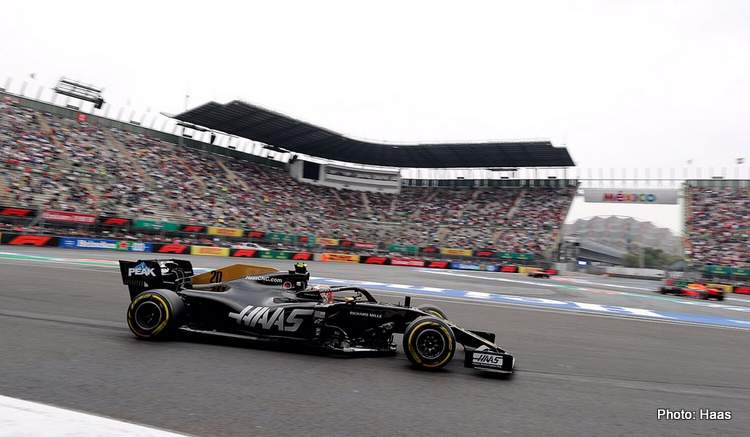 Haas report from Sunday at the Mexican Grand Prix, round 18 of the 2019 FIA Formula One World Championship.

Both Haas F1 drivers started on fresh sets of Pirelli P Zero Yellow medium tires and they made them last well into the 71-lap race around the 4.304-kilometer (2.674-mile), 17-turn circuit. From his 17th grid position, Magnussen held steady during the opening laps and made gradual forward progress as competitors ahead of him began to employ a variety of pit strategies. He advanced as high as 10th place on lap 18 before tire wear began to hamper his efforts. He pitted from 15th on lap 30 for a set of White hard tires and resumed in 17th.

Grosjean dropped a pair of positions from his 18th grid position on the opening lap. He climbed as high as 16th by lap 13 and pitted from that position on lap 39, well past the race’s halfway point. He, too, took on a set of hard tires and resumed in 19th.

Magnussen and Grosjean both picked up a pair of positions over the final stretch for their finishing positions of 15th and 17th.

Mercedes driver Lewis Hamilton won today’s Mexican Grand Prix by 1.766 seconds over Scuderia Ferrari driver Sebastian Vettel with Hamilton’s Mercedes teammate Valtteri Bottas bringing home the final podium position of third, another 1.787 seconds back. It was the 83rd career win for Hamilton, his 10th of the season and his second at Mexico City, and the 100th Formula One win for constructor Mercedes.

Next up on the 2019 FIA Formula One World Championship calendar is next weekend’s United States Grand Prix at the Circuit of the Americas in Austin, Texas. Race day is Sunday, Nov. 3.

“It was a tough afternoon. Nothing was working very well, we just have to hope that the next race is better. We need to keep looking to find out what’s going on with the car. Here, it hasn’t felt right since FP3, and the race confirmed that.”

“I think we did a good job considering we made a one-stop strategy work. We had damage on the car, I was hit by Kimi (Raikkonen) at the start, we were all squeezed up and he damaged my floor. Taking those things into consideration, and knowing that we just didn’t have the pace today, I think we did the best that we could.”

“Obviously it was a disappointing race for us. We got the best out that we could in terms of our performance this weekend. We didn’t make any mistakes or anything, there just wasn’t more performance in the car. Going into this weekend we knew this would likely happen. We go away knowing that coming in here we were weak, and we go away weak. That doesn’t mean that we give up. We’ll try again in Austin where it’s a little bit of a more normal race track, and we’ll see if we can get a little bit more out than we did today.”