Ferrari: We Cannot Say We Are Happy Today 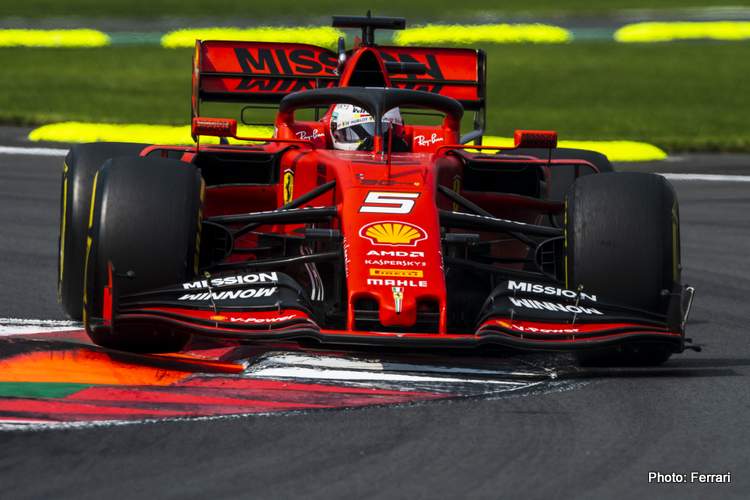 Ferrari report from Sunday at the Mexican Grand Prix, round 18 of the 2019 FIA Formula One World Championship.

Scuderia Ferrari Mission Winnow was hoping for something better than the second and fourth places for Sebastian Vettel and Charles Leclerc respectively, with which it leaves the Autodromo Hermanos Rodriguez. In what was a very closely contested race, the SF90 drivers found themselves having to come from behind, but were unable to overtake Lewis Hamilton and Valtteri Bottas in the closing stages.

Start.  At the start, Charles and Sebastian both got away well off the front row although for a moment the German found Lewis Hamilton coming alongside having got a tow of the SF90, but he had no trouble in tucking in behind his team-mate. At first the Ferrari men managed their tyres, before gradually starting to push.

Pit stop. On lap 14, Alex Albon pitted in the Red Bull and Leclerc came in next time round, fitting another set of Medium tyres with a two stop strategy in mind. Hamilton stopped on lap 23, fitting Hards, gambling on a one stopper. On the new tyres Charles seemed to be able to run at a good pace, but after a few laps his times got worse until he was running at the same pace as Sebastian, who had yet to stop.

Only stop.  Looking at Charles’ pace and the fact Hamilton had made an earlier stop, data from Friday and Saturday suggested the Englishman might be in trouble with tyre degradation in the closing stages. Sebastian and the team therefore decided to stay out until past half distance on lap 37, before fitting a set of Hard tyres to run to the flag, hoping to find their rivals struggling towards the end. Charles made his second stop on lap 43, which took three seconds longer than it should have done when the right rear wheel proved difficult to fit. Hamilton was now leading with just under four seconds in hand over Vettel, five on Bottas and 16 on Leclerc.

Final stages. Over the closing laps, the anticipated degradation for the early stoppers did not materialise and so Sebastian got within a second of Hamilton, but was unable to attack him for the lead. The top four finishers crossed the line within just six seconds. In under a week’s time we are back on track in Austin for the US GP.

“We didn’t get it so wrong today. It was simply a case of not believing that the hard tyres could last so long, considering how early in the race Lewis pitted. He took a risk and it paid off. For our part, we tried both strategies; two stops for Charles and one for me and the final result proves that both of them were good.
On Friday, we had a lot of graining, while today there was none and that made the difference, helping those who decided to take the risk.
Obviously, we can’t be pleased with this result, because when you start from the front row, as a team, you expect to win. In the closing laps we lacked the speed to try and go for the win. For Lewis and Valtteri, everything went really perfectly, while maybe we were just a bit unlucky.”

“Starting a race from pole and not finishing first is always disappointing. The beginning of the race went well, and I managed to stay in the lead for the first stint. Wanting to cover off Alex (Albon), we pitted early and committed to a two-stop strategy.
After my first stop the race was very tricky: my second stint was difficult and any time I approached a car ahead I struggled with overheating and couldn’t overtake.
All in all, it’s a shame but if there is something I can learn from today it is to try to help the team more with my feedback from inside the car so that we can make the best call together.”

“No doubt we cannot say we are happy today, as starting first and second you expect a different outcome. It was a long afternoon and we knew it would be a tough race, managing the tyres. In terms of strategy, who was behind took a gamble and decided to go for a very early one-stop, which is what you do when you are not in front. Well done to them.
Two-stop strategy was still a good strategy but Charles’ second stint on Medium was not great and we need to understand why, he also lost some time at the pitstop and all of that gave him some disadvantage at the end of the race.
This unexpected behaviour of the tyres is probably the main surprise today. But in the end I think we had a good pace today and a good qualy yesterday and this is what is reassuring and encouraging us, so we are looking forward to the next races.”