Renault: It was a far from smooth Saturday 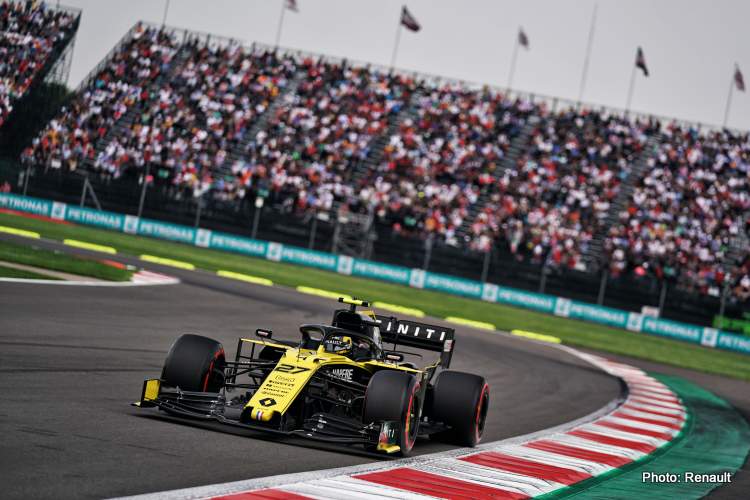 Renault report from qualifying for the Mexican Grand Prix, round 18 of the 2019 FIA Formula One World Championship.

It was a far from smooth Saturday, with Nico and Daniel missing running in the morning’s Free Practice 3 after discovering contamination in a cooling system. Both car crews did a phenomenal job to prepare the cars for qualifying, but going into the session was always going to be a tall order.

Both drivers progressed through Q1 having completed two Soft tyre runs and began Q2 on Softs with Nico eighth after his first effort and Daniel in tenth. However, despite making improvements on their second runs, both drivers finished the session narrowly outside the top 10 and missed out on Q3.

Nico Hülkenberg, #27, R.S.19-04, Q: P12, 1:16.885 / FP3: No Time Set
“Given the circumstances, we’ll take twelfth on the grid. It was difficult to prepare for qualifying without the morning run, so it was a bit of a cold start for us. The mechanics did a great job to prepare the car in time so credit to them for their effort. I think we have a race on our hands tomorrow, especially as we have a free choice of tyres and some flexibility on strategy. It might work in our favour as our race pace has looked good recently.”

Daniel Ricciardo, #3, R.S.19-02, Q: P13, 1:16.933 / FP3: No Time Set
“It’s frustrating not to have finished higher up, but I just couldn’t execute it today. Firstly, the team did an awesome job to get ourselves out of a difficult situation. It wasn’t easy out there, but we made a good start in Q1, which was relatively smooth, but Q2 was just a bit messy. We’ll try and bounce back tomorrow. I’m sure to be feeling fired up.”

Alan Permane, Sporting Director
“We were only missing a very small amount of time to go through to Q3 and not having any running this morning certainly hurt us. But, credit to the team and mechanics from both sides of the Channel, who had a very challenging day. To get the cars ready for qualifying was excellent and the drivers did an incredible job to go into qualifying with minimal preparation. We’re looking to do our best from where we are tomorrow; we’ve had good race pace in previous races so there’s everything to play for.”