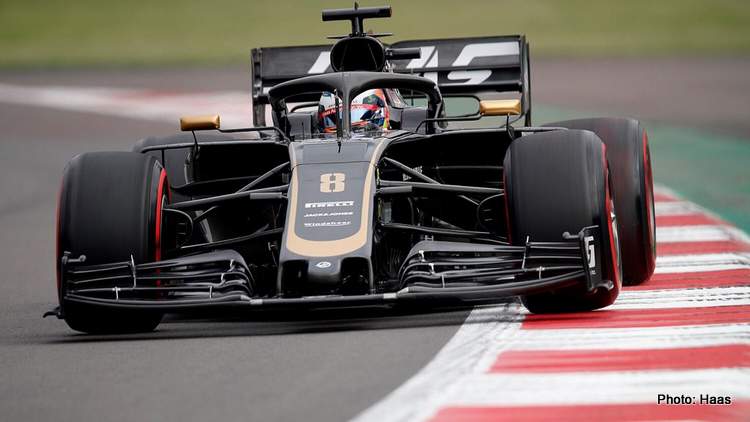 Haas report from qualifying for the Mexican Grand Prix, round 18 of the 2019 FIA Formula One World Championship.

The Q1 run-plan consisted of three timed stints for Grosjean and Magnussen utilizing the Pirelli P Zero Red soft tires throughout. A first lap spin at Turn One blighted Grosjean’s opening run. He went on to record a best lap of 1:18.599, for 18th overall, on his third and final tour. Magnussen posted his fastest lap of 1:18.436, placing him 17th, on his second run on fresh rubber.

Taking the Mexican Grand Prix pole and his second of both the season and his Formula One career was Red Bull Racing’s Max Verstappen, whose fast Q3 lap of 1:14.758 beat second-place qualifier Charles Leclerc of Ferrari by .266 of a second.

“Last night we made a fair bit of change to the car, and in FP3 the car felt really good in terms of rear-end, so we were lacking front-end. I thought if we could balance the front-end and keep that rear-end, we’re going to make it to Q2. I was confident of one lap pace, I thought we can do this.

We rebalanced everything, we got into qualifying, and I got into Turn One and I spun – just on braking. The changes we’ve got to do from one session to another is huge, it’s not something you normally do. We have to try to understand everything, we haven’t quite got on top of it. Hopefully we can find something.”

“We had kind of predicted this, which doesn’t make it good, but it’s what we expected. We had oversteer, understeer, a bit of everything. We’re competitive people, you always go into each session to try your best, but it wasn’t to be today. We’ll just try and get out of it what we can tomorrow. We’ll try and be in the best position to take whatever comes our way.”

“No big surprise to me about this qualifying performance, I saw it coming, but that still doesn’t make it right. At this level of altitude, we just don’t carry enough downforce to let us do a decent run – nothing new. We need to work on our aerodynamics and just try to limit the damage this year, and not carry this performance into next year. Everybody’s working hard on getting it better for next year. That’s the only thing we can and have to do.”