Ferrari: We Are All Very Evenly Matched 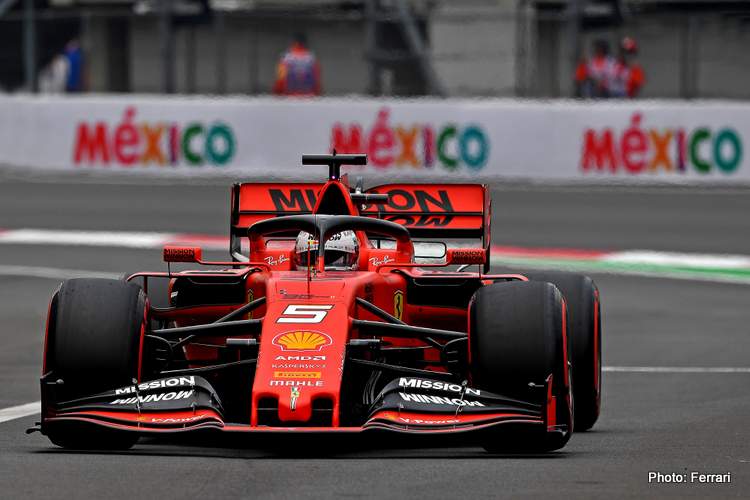 Ferrari report from qualifying for the Mexican Grand Prix, round 18 of the 2019 FIA Formula One World Championship.

Charles Leclerc and Sebastian Vettel will start tomorrow’s Mexican Grand Prix from the front row when it gets underway at 13.10 local time (20.10 CET.) It was not as easy as it sounds however, as the final minutes of Q3 were chaotic. Sebastian Vettel was not able to fight for pole all the way to the end, because of yellow flags waved after Valtteri Bottas crashed. In fact, the German had to abort his lap just when he was improving his time and might have been able to beat the quickest time set by Max Verstappen, or at least beaten his team-mate Leclerc to second spot. However, after qualifying, the Dutch Red Bull driver was given a three place grid penalty for failing to slow for the yellow flags. Therefore, Charles now starts from the number one slot with Sebastian alongside him. This is the Monegasque driver’s seventh pole of the season, the ninth for Scuderia Ferrari Mission Winnow. It is also the sixth in a row, something which Ferrari had only ever done twice before in 1961 and 1974.

Q2. Sebastian and Charles only needed one attempt to make it through to the final 12 minute top ten shoot-out and they used the Medium tyre, thus ensuring they can start the race with this compound. Vettel stopped the clocks in 1’15”914, while Leclerc’s time was a 1’16”219.

Unlucky in Q3. Both drivers had two sets of new medium tyres available for the final part. Neither man got a perfect lap on their first attempt. Vettel crossed the line in 1’15”170 while Charles did a 1’15”024. The two SF90s then pitted to change tyres and set out to attack the time set by the leader at the time, Max Verstappen. Charles made a mistake in the third sector, while Sebastian was up on the clock. But at that point, Valtteri Bottas crashed into the barriers and that brought out the yellow flag. It meant Vettel was really out of luck as he could have challenged for pole position, or at the very least, a place on the front row and indeed in the end, that’s what came his way after the Red Bull driver was penalised.

“We knew that our competitors would be strong this weekend. After FP3, we realized that we might have a shot at pole but when they put it all together in qualifying today they were just too quick. Even if I did a lap that I was quite happy with on my first run in Q3, I was still a tenth behind Max so I tried to go out with a different setup for the last lap. Unfortunately, I ended up having some oversteer and lost time, especially in the last sector.
It is a bit of an odd situation starting from pole now after finishing qualifying in second, but our approach will stay the same. It will be very important to retain the lead after the start. The one who is first after turn 3 will have a huge plus because cooling is a big factor for everyone here, putting the following car at a disadvantage. The straight to turn 1 is very long, so I will have to try to capitalize on our straight line speed there. I will give it my all and hope to have an exciting race tomorrow.”

“I am not entirely happy with today, because I could have had a better result if it had not been for the yellow flags for Bottas’ accident. On the first run I was probably a bit too cautious in sector 2 after a very good first sector, then I lost my rhythm a bit and was too aggressive in the final part of the lap and had a big snap in the last corner. I felt quite confident that I could find more time on my second run, but then the yellow flags came out. That can happen some times.
The key tomorrow will be to have a car that works well, to look after the tyres and to choose the right strategy. The top three teams all start on the same tyre, but it will be a very close race.”

“We are very happy to have secured our sixth consecutive pole position with both cars on the front row. It will be a tough race and, as we saw on Friday, tyre degradation will be a significant factor. All the top teams opted to start the race on the Mediums as a consequence of this degradation, so it could be a one or a two stop race. We will see different strategies come into play. The qualifying time sheet shows that we are all very evenly matched, so it will be a tense and difficult race with everything to play for and strategy will definitely play an important role.”