Williams: we understand what we need to do 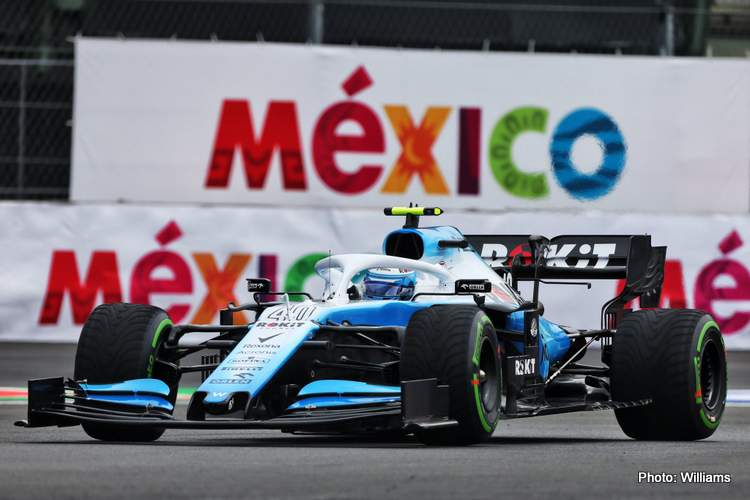 Williams report from Friday practice at the Mexican Grand Prix, round 18 of the 2019 FIA Formula One World Championship.

Dave Robson, Senior Race Engineer: Following overnight rain, FP1 began with a damp track in cool conditions. As a result, conditions were difficult for both George and Nicholas. We were able to gather more valuable data from the new front wing before we embarked on our normal FP1 programme. The altitude in Mexico makes managing the car’s quite difficult but, with both cars running different programmes, we were able to complete several useful tests which will help us on Sunday.

Nicholas did a very good job in difficult conditions and provided us with some valuable feedback on the car performance. He ran an older specification of floor and front wing, which compromised his laptime but nonetheless his comments were extremely insightful and useful.

The track was warmer in FP2 and this changed the tyre behaviour for the better. Robert was back in his car and was soon up to speed and on top of the peculiarities of Mexico. Our long runs were compromised a little by running in traffic but, overall, we were happier with the car at high fuel and we understand what we need to do overnight to improve the car further for the race.

George Russell: With 25 percent less downforce than every other circuit because of the altitude, there was a lot of sliding around but it was definitely a cool experience driving in front of the baseball stadium. There were a few positives to take away from today; our high fuel pace seemed relatively good and we gathered some more data this morning back-to-backing the front wings, so that was encouraging.

Robert Kubica: It wasn’t an easy afternoon, as the conditions plus the high altitude mean that we lose quite a lot of downforce. It is the same for everyone as we cannot change the altitude, so there is a lot of sliding. We hope to find some improvements in order to slide less, which will make life easier for the tyres and hopefully we will pick up a bit of pace.

Nicholas Latifi: It was nice to be back behind the wheel, after my last outing at Spa as it feels like a long time. After my experience driving here last year, I knew that the track has very low grip due to the high altitude. It was a very busy session, I ran a completely different programme to George, we got a lot done and the team was happy with the data that we gathered. My goal for the FP1 sessions remains the same; to get as much information for the team going into FP2. It is never to get the fastest lap time, however, as a driver you try and do that to show the team what you can do. It was a good experience driving the car again with no big mistakes, everything was clean, so I am pleased with the session.