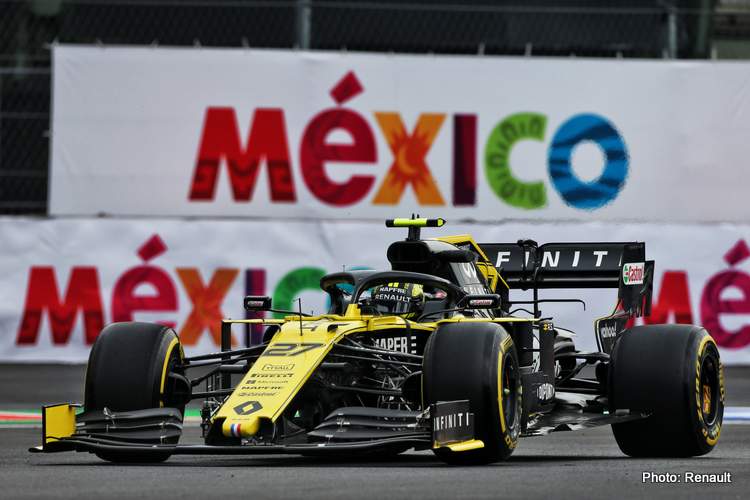 Renault report from Friday practice at the Mexican Grand Prix, round 18 of the 2019 FIA Formula One World Championship.

Nico Hülkenberg was the team’s quicker driver, finishing eleventh in the morning and ninth in the afternoon. Team-mate Daniel Ricciardo finished FP1 in fifteenth and FP2 in thirteenth.

Alan Permane Technical programme notes
• Both drivers began their Friday running on Pirelli’s Intermediate (green) tyres as the circuit remained damp from the heavy, overnight deluge. Rakes were fitted to both cars for some front wing aero assessment evaluations.
• After their first proper run on Mediums (C3, yellow), Nico’s opening feedback was largely positive and he was happy with car balance, while Daniel was less content.
• After the red flag stoppage, both cars switched to Softs (C4, red).
• For FP2, Daniel made set-up changes to combat his morning issues.
• Nico began on Mediums and Daniel on Hards (C2, white), before both drivers switched focus to short and then long runs on Softs.
• The long runs looked promising relative to our competition, especially on Nico’s Soft tyre run.

What we learned today:
The tyres – a step harder from last year’s range – look tricky to manage, with the Soft particularly prone to graining.

Nico: “Today was quite reasonable for us. The sessions felt a little short with the red flags and our programme of running slightly later, but we got through what we needed to do and the car felt good from the get go this morning. The Soft is a challenging tyre and it’s quite similar to last year with graining an obvious problem. It’s quite difficult to manage but you do what you can out there. I felt comfortable in the car so, overall, a decent Friday and a solid start to the weekend.”

Daniel: “We struggled a bit today for balance on the car. I wasn’t that comfortable this morning, we did make some small improvements and some progress this afternoon, but there’s still a lot more to do. It’s not where we want to be at this stage. We still have a bit to gain, so we’ll see what else we have in the pocket overnight and into tomorrow.”

Rémi Taffin, Engine Technical Director:
“We got through the majority of the programme today. With the high altitude here, one of the principal concerns is cooling and we didn’t have any issues with it, either on the engine or on the chassis. With no issues with reliability we were able to do enough laps to gauge performance. This morning it was a little hard to get going, but we made some changes before the second session and the car seemed to behave better. We missed a little evaluation of the medium tyre runs as both drivers flat spotted on their fastest lap, but we have a good basis to go forward this weekend. We know there is still work to do to get the car exactly as the drivers want and we can extract more, but we’ll look at everything tonight to see where we can improve.”