Leclerc: The dynamic of the team is very good right now 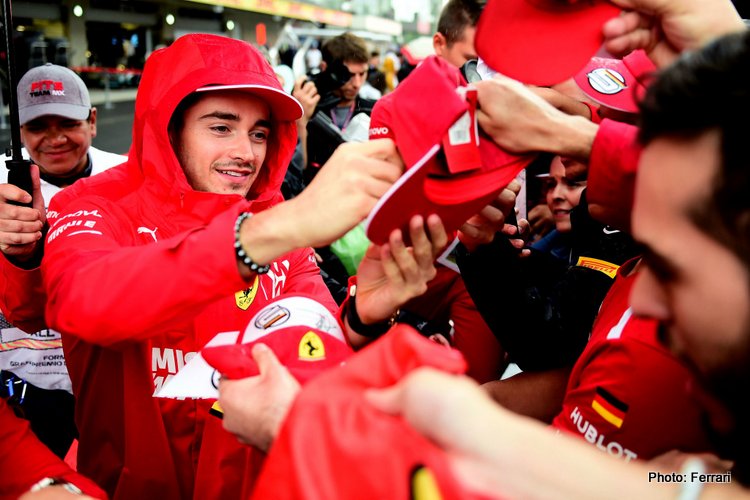 Across the Formula 1 paddock, Ferrari is seen as the front-row favourite in the Mexican Grand Prix, but the challenge will be turning that into a win while avoiding another drivers’ duel.

Ferrari has been the team to beat since the summer break with three victories. Its cars have started from the pole position the last five races.

The issue isn’t whether Ferrari has finally outmuscled Mercedes on the track, but whether the team can manage the relationship between drivers Sebastian Vettel and Charles Leclerc through the stretch run of the season while keeping an eye on 2020.

There has been some friction.

The 32-year-old Vettel, a four-time champion, has been the de facto team leader since joining Ferrari in 2015. But his time with the Italian team has been most notable for losing head-to-head battles for the championship with Mercedes’ Lewis Hamilton in 2017 and 2018. Hamilton is once again set to clinch the championship either in Mexico City or next week at the U.S. Grand Prix in Texas.

Leclerc, a 22-year-old rising star, has upset the team balance. He earned his first two career victories at consecutive races in Belgium and Italy and maybe should have more.

The two clashed in Russia when Vettel got an early jump into the lead by riding Leclerc’s slipstream at the start, as was part of a team strategy. But Vettel then ignored team orders to give back the position. That caused a shuffling of pit stop strategies and Hamilton ended up taking the victory after Vettel had engine failure.

Leclerc faced several questions this week about the team dynamic within the Ferrari garage and his relationship with Vettel.

“Of course I respect him,” Leclerc said. “Everything he has achieved in the sport has been absolutely amazing. Growing up, watching Formula One, I looked up to him hoping to join him one day. Now to fight with him is a special thing.”

Leclerc said he thinks he’s earned equal treatment within the team, “I think I’ve been quick in some races and I’ve shown what I was capable of. Now it is up to management to decide.”

Ferrari Team Principal Mattia Binotto said having two winning drivers is a luxury, not a problem, “They are all going for a single objective, which is winning. I think what again is more important is that at least between us we’ve got clarity and fairness and I think that’s key.

With its impressive surge since the summer break, Ferrari is starting to look ahead to 2020 and taking aim at Mercedes for next season’s championship, something it hasn’t won since 2007. Ferrari will be keen to avoid the kind of tension that simmered in the Mercedes garage when Lewis Hamilton and Nico Rosberg were fighting for the title in 2015 and 2016.

The Hamilton and Rosberg rivalry ate at the team for two years and spilled out into on-track crashes and post-race bickering. Rosberg abruptly retired after winning the 2016 championship and Mercedes signed Valtteri Bottas, who has been a capable and quiet subordinate partner for Hamilton.

The Ferrari garage is tranquil, Leclerc said, “The dynamic of the team is very good right now.”

That could be tested on the first corner Sunday if Leclerc and Vettel start on the front row and new team orders emerge. Vettel cautioned a 1-2 start isn’t guaranteed.

The Autodromo Hermanos Rodriguez isn’t just about the long straight to the first corner. It’s also about navigating the twist and turns of the slow corners on one of the shortest tracks of the season. Just like within a team, it’s about finding balance.

“Finding the right handling, the confidence in the car,” Vettel said. “All the small things make the difference.”