Haas: it wasn’t a very spectacular Friday for us 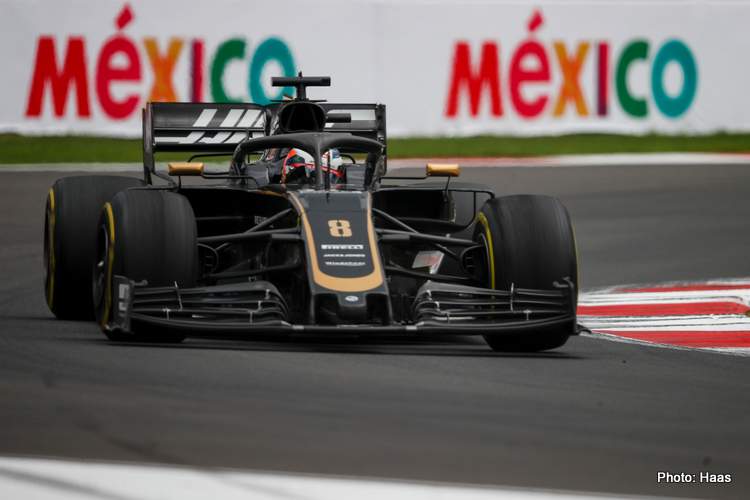 Haas report from Friday practice at the Mexican Grand Prix, round 18 of the 2019 FIA Formula One World Championship.

Overnight rain meant a damp, but drying track greeted the field at the start of FP1. Both Haas F1 drivers set their installation laps on the Pirelli Cinturato Green intermediate rubber before switching exclusively to the P Zero Red soft compound for three timed stints. Magnussen’s best lap of 1:19.013 was good for 12th overall on his second soft run. Grosjean was 18th overall at the checkered with a lap of 1:19.850 – also set on his second set of softs.

Grosjean and Magnussen took to the track for FP2 on Yellow medium tires for their opening stint before switching to new sets of softs for their fast laps. Grosjean clocked a 1:18.766 for 15th fastest while Magnussen’s 1:19.306 placed him 17th on the timesheet. Both drivers finished the session on high-fuel, race-simulation runs utilizing the medium and soft compounds.

Between the two sessions, Haas F1 Team ran a total of 118 laps – 59 each by Magnussen and Grosjean.

“It’s not been an easy day, but we always know Mexico is a challenging track, the high altitude makes everything more on the edge. We’ve worked as hard as we could, but I guess we’re facing the same issues as everyone else in terms of trying to keep the tires alive. It’s been very hard. We were ready for a tough weekend, we won’t give up, we’ll be trying everything we can through to the checkered flag.”

“It’s a unique track with the low downforce and thin air. Our tires haven’t been working and it’s been cold. It’s pretty difficult, but it’s difficult for everyone. We haven’t looked quick today but the midfield’s very tight. It wouldn’t take much to put us back somewhere in the middle. There’s more emphasis on the race this time because it’s high-wear on the tires. There’s more strategy things to look at, it’s not just a clear one-stop. That’s going to be interesting and we’ll look a bit more towards that.”

“I would say it wasn’t a very spectacular Friday for us. In the morning, with the track being wet at the beginning, it took a little bit of time to get it to the condition where we could learn something. We always know Mexico isn’t our strongest point because of the downforce we’re missing, you feel it here more than anywhere else because of the altitude. It wasn’t too bad and we’ll just keep on working trying to get the best out of the weekend.”