Ferrari: It All Went According to Plan 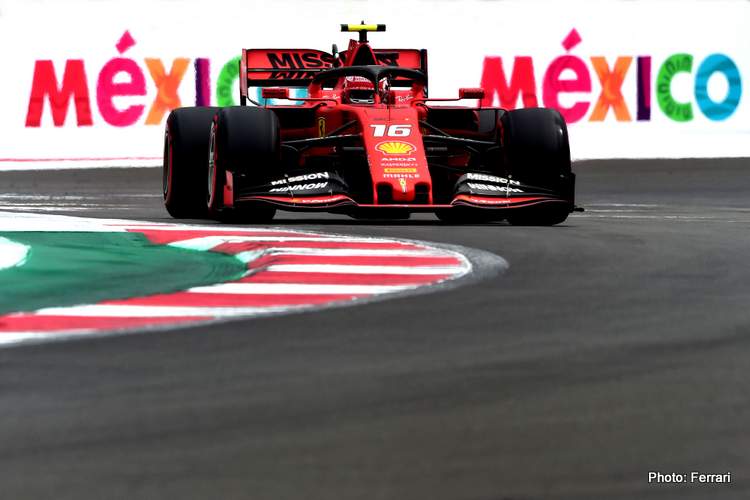 Ferrari report from Friday practice at the Mexican Grand Prix, round 18 of the 2019 FIA Formula One World Championship.

The highest track of the year, at 2300 metres above sea level, hosted the first day of practice for the Mexican Grand Prix and it all went according to plan for Scuderia Ferrari Mission Winnow, getting through the full job list without any particular problems. After the two sessions, Sebastian Vettel was fastest in 1’16”607 and Charles Leclerc was third in 1’172”072.

FP1. At the start of the first session Charles and Seb both took to the track on Intermediate tyres, given that the track still had some damp patches after heavy overnight rain. The first half hour was therefore given over to practice starts and installation laps without setting times. When the track was dry enough, both SF90s were fitted with the Medium tyres, the only compound the team ran in the morning. Charles did a total of 23 laps, the quickest in 1’17”446, the second fastest of the session. Sebastian was sixth, doing 20 laps, the best in 1’18”218.

FP2. Both drivers began the 90-minute afternoion session still on the Medium tyres: Sebastian posted a 1’18”697 getting down to 1’17”960 on a second run. Charles did a 1’18”183, with lap times coming down as the track got rubbered-in. Once the session resumed after it was red flagged when Alexander Albon went off track, the SF90s went back out on Soft tyres for the first time, as they ran a qualifying simulation. Vettel was quickest at this stage in 1’16”607, with Charles fractionally slower in 1’17”072.

Long run. In the final third of the session, the programme as usual switched to race preparation, doing runs with a high fuel load. Sebastian started on Medium tyres, before finishing on the Softs, running at a pretty consistent pace, while Charles did the opposite. By the end of the day, the team had got through all its programme without any problems. Vettel did 35 laps, Leclerc did 34.

Programme. The third free practice session begins at 10 local tomorrow (17 CET) useful in terms of preparing for qualifying at 13 (20 CET). The Mexican Grand Prix gets underway on Sunday at 13.10 local (20.10 CET).

Sebastian Vettel: “This morning I was the gardener of Turn 1, in terms of going through the grass. I like mowing the lawn and I did it this morning a couple of times but didn’t need to do it again in the afternoon, since I was able to find the rhythm and everything went smoothly from then on.
Charles and I split the work today. I did most of the work on the Medium tyre, which was ok. We don’t look that bad, but I don’t have the full picture yet. I did only two laps on new Softs so it’s difficult to say, but I don’t think I had the worst tyre today for the long runs.
However there are still some areas where we can improve tomorrow in terms of the general balance and the feeling I have with the car. Max (Verstappen) looks strong, but all the three top teams are very close, so let’s see what tomorrow brings.”

Charles Leclerc: “It was a positive Friday for us as a team. Our qualifying performance was good and the car looks quite competitive here.
For me, FP1 was good while FP2 turned out to be more tricky. I struggled a bit with the car balance and there are still some improvements I want to make in my driving. In general, the grip is rather poor on this track because we find ourselves at such a high altitude and the downforce is not as efficient as it is at other tracks.
To win this race, you have to get a good start and keep the lead well into turn 1. Being behind someone is a disadvantage here because of the cooling issues everyone faces, so having a strong qualifying result will be a key factor. Our competitors are strong and we will see where we really stand tomorrow, but we are confident of our potential and ready to give it our all once again.”