Outside Line: How Mercedes Won the Championship 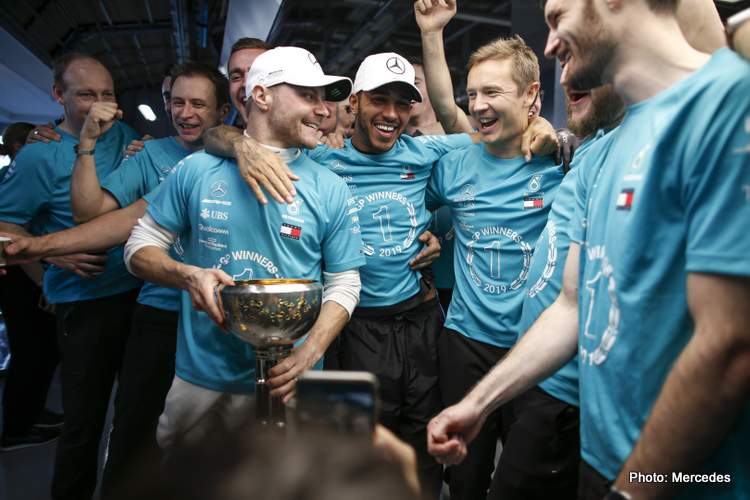 It’s was a long time in the making, and now it’s official: Mercedes are the 2019 constructor’s champions. Their sixth title in succession, the Silver Arrows have now equalled Ferrari’s record from 1999-2004 and further cemented themselves as one of the great teams in sporting history.

That said, number six didn’t come without a few twists and turns, even if ultimately they had enough of a margin over Ferrari – 179 points – to seal the deal with four races remaining. With that in mind, let’s take a look back through the 2019 season, and the key races that decided the 2019 championship.

Melbourne: Mercedes Take the Sandbags Off

Enacting the sort of slow-play to make even the most skilful poker player jealous, Mercedes somehow went from needing to play catchup with Ferrari after the latter’s impressive display in preseason testing, to a commanding 1-2 at the first race of the season. Even for a team that had made a yearly habit of underplaying their performance, this was on another level entirely, and set the tone for a highly successful run through the first third of the season.

A race that looked like Ferrari’s to lose… until it didn’t, the Scuderia seemed set to put the embarrassment of Albert Park behind them quickly, having locked-out the front row in qualifying at Sakhir. As it turned out, both Sebastian Vettel and Charles Leclerc squandered leads in the race, the former being caught by Lewis Hamilton and then spinning down to fifth, the latter through no fault of his own as an engine-cylinder failure with 11 laps remaining allowed both Mercedes past him. A heartbreak on multiple levels, it would turn out to be Ferrari’s only shot at a race win in the opening six races.

By this point in the season, it was abundantly clear the Mercedes W10 was superior in all facets to the Ferrari SF90 bar straight-line speed, and at most tracks, that meant the latter never had a chance to really take the fight to the former – but that wasn’t the case in Canada. As power-hungry a track as they come, the Scuderia could flex its straight-line superiority to the fullest, and that should have been enough to give them their first win of the season. Alas, Lewis Hamilton delivered one of his trademark stonking laps in Montreal to split the Ferraris in qualifying, and then on Sunday, Vettel relinquished his win when he slid off-track and into the stewards’ naughty book after nearly taking-out Hamilton while trying to rejoin, the subsequent five-second penalty demoting him to second, and gifting the Briton another victory.

Leclerc having just had another win snatched from him in Austria, it seemed like things couldn’t get any worse for the Scuderia… until along came a British GP that saw Mercedes outscore them by the biggest margin of the season to date, 44-15. Seeing two very different performances over the weekend from their drivers, Leclerc qualified within 0.079 seconds of pole in P3 and finished in the same position, but Vettel could only manage sixth on Saturday before spectacularly rear-ending Max Verstappen in the race and finishing 16th. Hamilton, meanwhile, led home Bottas in a very comfortable 1-2.

The championship essentially decided by the summer break, the hope was still that Ferrari could keep things interesting for as long as possible, and they had done a very good job of it in the first three races back, winning them all with a car that was finally living up to its preseason potential. Again in Sochi they were the team to beat, qualifying 1-3 with Hamilton between them, and again they completely squandered their advantage. Circumstances meant pole-sitter Leclerc had no choice but to slipstream P3 Vettel into the lead at the start, from which the pit-wall tried to engineer a swap, only for the German to refuse to slow down enough to enact it. Ultimately the Scuderia got their way by keeping Vettel out too long for his first stint, but the subsequent lack of a gap between Leclerc and both Mercedes came back to bite them when the latter were able to pit both cars under a virtual safety car period caused by an MGU-K failure for Vettel. A sitting duck for the Silver Arrows, Leclerc was forced to concede the lead as he pitted again under a full safety car period, while Hamilton led Bottas to their eighth 1-2 of the season, and equalled their feat in Silverstone of outscoring the Scuderia 44-15.

Mercedes might have already had a hand and four fingers on the trophy after Sochi, but even by Ferrari standards, few could’ve expected them to be as helpful as they were in Suzuka, courtesy of a strange day that quickly went from very good to very bad for the Scuderia’s drivers. Starting with Vettel leading Leclerc in a front-row lockout in Sunday morning’s qualifying, the championship seemed primed to last at least another round, before both drivers made immediate, and costly mistakes – Vettel having to sacrifice his launch off the line to avoid false-starting, Leclerc by running into Max Verstappen at the second corner. In so doing, a Ferrari 1-2 became a Bottas-Hamilton 1-3, and with it, the championship was decided.

Unlike the 2018 season, the result was never particularly in doubt – but it should have been. As good as Mercedes have been, Ferrari gave them an awful lot of help – so much so that the above list isn’t even an exhaustive one, and you would probably need a whole book to properly chronicle all the new and interesting ways the Scuderia managed to shoot themselves in the foot. That said, in a sport where much of the attention is focused on the individual, this season provided a textbook example of the importance of the team as a whole, and certainly no team has done that better than the Silver Arrows.

Big Question: Did Mercedes ‘win’ the 2019 Championship? Or did Ferrari ‘lose’ it?