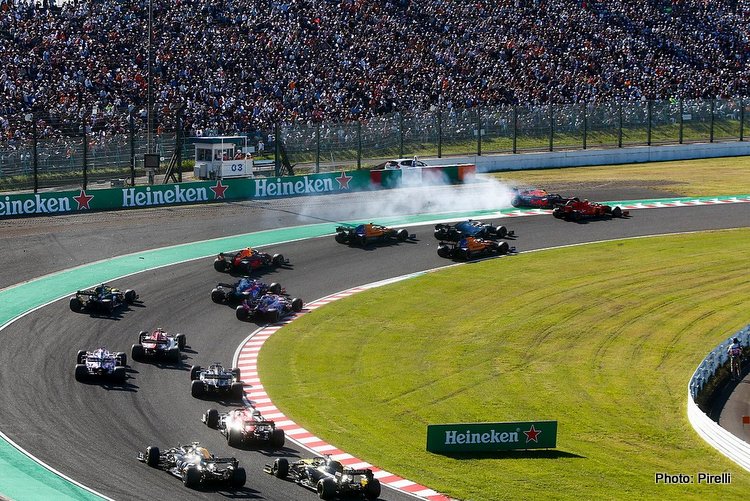 Extreme weather led to a high-pressure Sunday in Suzuka, but despite Ferrari locking out the front row in qualifying, Mercedes rode out the storm and in the end Valtteri Bottas’ sixth career victory.

And as Formula 1 Managing Director, Motorsport Ross Brawn says the achievement is testimony to the leave-no-stone-unturned attitude the team has brought to the grid over the past six years.

However, he adds, Mercedes weren’t the only ones leaving Japan covered in glory, with Renault’s Daniel Ricciardo, Red Bull’s Alex Albon and Suzuka circuit also worthy of high praise.

The compressed weekend in Suzuka also brought up some thought-provoking ideas on the structure of F1 events for the future, as Ross explains…

Six consecutive titles is a record. In Suzuka, Mercedes not only won the Constructors’ title it also ensured that only one of its drivers can take the Driver’s crown this season. It’s an amazing result and I really want to congratulate Toto Wolff and his team.

Twelve world titles in six years is exceptional and beats Ferrari haul from 1999 to 2004, something I well remember as I was technical director of that team at the time.

Back then Maranello missed out on the Drivers’ title in the first of those years, losing out at the final race, in Suzuka in fact, when Mika Häkkinen won, thus shattering Eddie Irvine’s dream of bringing the title back to Ferrari for the first time since Jody Scheckter’s triumph 20 years earlier.

Much of this success is down to Lewis Hamilton

Mercedes deserves this record, having been invincible in the first three years of the hybrid era, after which it showed it was able to still hold off its rivals for the three more years when Ferrari and occasionally Red Bull provided the competition.

Much of this success is down to Lewis Hamilton, an amazing driver who is rewriting the history of this sport in a manner all his own.

It’s always difficult to establish how much is down to the car and how much to the driver, but in the end, for me, it’s the team that counts the most. Formula 1 is a team sport and even if the driver is the star of the show he cannot win without a team behind him.

Mercedes has reached a higher level than its rivals and so far has been almost untouchable. However, without wishing to be the bearer of bad tidings, sooner or later the wind changes. It’s the law of the jungle in every sport.

But no matter what may come, the achievements of the men and women of Brackley, Brixworth and Stuttgart will always be in the history books.

The weather played a big part in the Japanese GP weekend, but after Typhoon Hagibis wiped out Saturday’s programme, Suzuka delivered a great show on Sunday.

The outcome of qualifying was certainly surprising as Ferrari unexpectedly monopolised the front row. However, the role of favourite did not do the Italian team any favours, as any chance of victory evaporated before the second corner, first with Sebastian Vettel’s fluffed start and then due to a mistake from Charles Leclerc that led to a collision with Max Verstappen.

From then on the complexion of the race changed, with the front three drivers running different strategies and, in the end, victory went to perhaps the least likely of the trio, Valtteri Bottas who started from third on the grid and who had not won since April.

The strategic variety was determined mainly by the demanding nature of the Suzuka track when it comes to tyres, with heavy degradation leading all the top team drivers to opt for two stops.

Typhoon Hagibis was a major player

This added to the show, as is always the case in Formula 1, a sport where any single aspect can decide the winner.

Typhoon Hagibis was a major player at this year’s Japanese Grand Prix, forcing the organisers to cancel all Saturday track activity and reschedule qualifying for Sunday morning, just four hours before the race.

So, it was a Super Sunday in Suzuka and that naturally reopened the debate about the shape of an F1 weekend. This is an aspect of the sport we have focused on in some detail as we work towards the rules that will govern Formula 1 over the coming years and we have taken into account the voices of all of the key players – the promoters, the teams and last but not least the fans.

I’ll be honest and say that there has been strong consensus, especially among the organisers, for maintaining the three-day format of track activity, although with a different timetable.

Best solution is to keep the event over three days

It’s true that a day like Sunday in Suzuka offers a great show in just a few hours but it would confine the feeder series races to the previous days.

After careful analysis we have concluded that the best solution is to keep the event over three days, revising the Friday format but leaving the rest untouched, with qualifying on Saturday and the race on Sunday.

In order to meet the demands of the teams and in order to slightly increase the number of Grands Prix, which will be at 22 next year, we have given consideration to reorganising the schedule so that teams and drivers can arrive a day later.

We’ll talk about the detail at the end of the month, when the new regulations will be published.

Sunday in Suzuka was a rollercoaster ride for Renault. It had been a terrible morning, with Daniel Ricciardo going out in the first part of qualifying and Nico Hulkenberg finishing in P15 in Q2 due to a hydraulic problem.

But it was a completely different story in the race, with the Australian staging an amazing climb up the order that took him to sixth at the flag, while the German drove a strong race that brought him a point.

Renault protest needs a careful investigation by the FIA

Then, much more unexpected than any typhoon, came the protest from Racing Point, alleging a violation of the technical regulations relating to a pre-set lap distance-dependent brake bias adjustment system.

The Stewards decided not to rule on such a complex matter in Japan, as it needs a careful investigation by the FIA, but it’s true that this question hovers over a result that was like finding water in the desert for a team that, compared to last year, has not made the progress it might have expected, and which is currently being beaten by its customer team McLaren.

None of this diminishes the team’s strong performance and its efforts to stay in the fight to finish the season as ‘best of the rest’. The gap is big at 34 points, but, with four races to go, it’s not insurmountable.

Honda obviously wanted a strong result at its home race, especially in a season that has seen the Japanese power unit return to winning ways after a 13-year drought.

Alex Albon made no mistakes and got the best result possible

In the end, the power unit saw its best result in Suzuka achieved by rookie star Alexander Albon, who finished just off the podium, taking the best result of his short career to date in Formula 1.

More significant still was his showing in qualifying, given that the Thai was able to equal team-mate Max Verstappen’s time to the nearest thousandth of a second before the Dutchman’s race was spoiled by the collision with Leclerc soon after the start.

Once he and his team had worked a two-stop strategy to bypass one-stopping Carlos Sainz, Albon had a lonely race, but he made no mistakes and got the best result possible, even if he was almost a minute down on Bottas.

Of the three rookies this year, Alex has had the best results, though obviously his chances of scoring received a boost during the summer break when he was drafted into a top team.

However, driving a Red Bull brings a lot more pressure – not just in going up against a superstar such as Verstappen, but also in doing enough to hang onto the seat for 2020.

With four races to go, Albon is eighth in the Drivers’ standings, 12 points behind sixth placed Carlos Sainz. It’s a target that’s within reach and could ensure his place in the sun for next year.