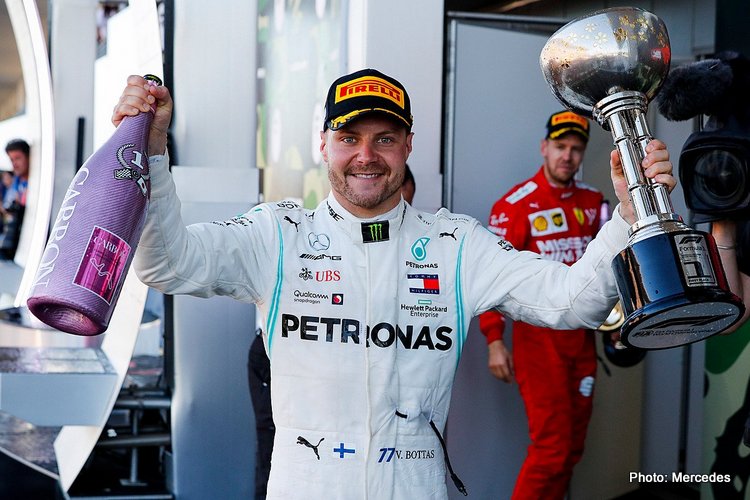 Before the weekend started, there were warning-signs about a typhoon called Hagibis that could potentially disrupt the racing at Suzuka.

While the Friday went according to plan, it was confirmed that all track activities for the Saturday would be cancelled or postponed. This meant that there wouldn’t be a free practice 3 and qualifying would be rescheduled for early Sunday morning but that the race would start at the normal time.

After Friday, many thought Mercedes was the one to beat, Red Bull would be close and Ferrari just couldn’t get their act together. On Saturday, most drivers got together for a FIFA tournament on the PlayStation or did other stuff while typhoon Hagibis made landfall in the evening. On Sunday morning, all was dry and sunny when qualifying started.

Much to our surprise, it was Ferrari who topped the charts when Sebastian Vettel took pole position, Charles Leclerc locked out front row and both Valtteri Bottas and Lewis Hamilton filled row 2 in 3rd and 4th position. Red Bull’s Max Verstappen and Alexander Albon set the exact same lap time to take row 3 in 5th and 6th while Carlos Sainz took 7th and Lando Norris 8th, which made McLaren “best of the rest” during qualifying. Pierre Gasly and Romain Grosjean rounded up the top 10.

Three hours later, it was race time and to keep it short, Bottas made a fabulous start from 3rd to 1st, Vettel seemed to have made a jumpstart but the stewards thought otherwise, Verstappen also made a great start to almost reach 3rd place before Leclerc understeered into him and that was Verstappen’s race done as there was too much damage to the car. Leclerc continued with a broken frontwing but had to pit.

For a long time, it looked as if Mercedes could get a 1-2 but when Hamilton also made a 2nd pitstop, the order would remain as if and the podium became Bottas, Vettel and Hamilton. Albon made up ground and finished 4th with Sainz in 5th. Leclerc received a post-race time-penalty which dropped him from 6th to 7th, meaning Ricciardo got 6th instead of 7th.

That said, also after the race, it was confirmed that Racing Point would lodge a protest against Renault so the official outcome of the Japanese Grand Prix remains unknown. What was known is the fact that, because of Bottas’s victory and Hamilton’s 3rd place, Mercedes was crowned 2019 World Constructors Champions for the 6th consecutive time. They have won all the V6 hybrid years. (2014, 2015, 2016, 2017, 2018 & 2019)

Was it a missed opportunity for Ferrari?

Ferrari locked out front row but a bad (jump) start by Vettel meant he was already down before entering turn 1. Leclerc from 2nd also didn’t have a great start and should’ve let go when Max Verstappen passed him into turn 1 but he probably didn’t think of the bigger picture and kept his foot down, causing him to understeer into Verstappen, which caused the Dutchman off track and left with a damaged car. Damage to Leclerc’s car also meant an early unplanned pitstop and it went downhill from there. If Vettel had a normal start and Leclerc had a bit more patient, then yes, they could’ve scored big so in my opinion, they did miss an opportunity.

Was Mercedes really that dominant in Japan?

Mercedes started from 2nd row and an awesome start from Bottas saw him settling in 1st position before going into turn 1.

Hamilton had more trouble and even almost lost his position to Verstappen and Sainz but when Leclerc and Verstappen tangled and Hamilton successfully fended off Sainz, he was in a good position. From start to finish, Bottas did nothing wrong but after the 2nd round of pitstops,

Hamilton on fresh soft tyres and with DRS, wasn’t able to overtake Vettel, who was on worn medium tyres. In hindsight, if both Ferrari boys did a better job during lap 1, Verstappen would’ve possibly ended up between or in front of the Mercedes. In my opinion, they weren’t but it all played out almost perfectly for Bottas and Hamilton and together they made sure they are the only two drivers left to fight for the drivers’ championship with four races to go and as some icing on the cake, they also provided Mercedes with the 2019 world constructors championship. It shows you don’t always have to be dominant. A bit of luck and being at the right spot, at the right time, can go a long way.

Victory for @ValtteriBottas and P3 for @LewisHamilton at the #JapaneseGP secures the 2019 Constructors’ Championship! 👇 https://t.co/3bkF7x67wj

Verstappen lined up in 5th while Albon started in 6th. A great start from Verstappen saw him going around the outside of Leclerc and he could’ve ended up in 3rd after lap 1. Looking at the long run lap times he set on Friday, he would’ve ended up on the podium and if Leclerc didn’t take him out, he should’ve been able to fight Ferrari and Mercedes.

Albon had a bit of a difficult start and what could’ve been, didn’t happen and he lost a few positions. +On the other side, if he did have a good start, he potentially would’ve been in the mix at turn 1 and it all could end up in tears. Although he should’ve done better at the start, it turned out it was a good thing he wasn’t mixed up in the turn 1 mayhem as he had more room to fight and at the end, finished 4th and that was a great result.

So they could’ve ended up better if they would’ve stayed out of trouble and should’ve been able to fight for the podium.

That’s a tough one as I want to go with Carlos Sainz. He wasn’t much on the world feed but had a solid race to finish 5th. But then there was Renault with Daniel Ricciardo ending up 6th and Nico Hulkenberg finishing in 10th. For both, this was a great result and some well-needed points for the constructors’ championship.

However…. when the race was done and dusted, Racing Point lodged a protest against Renault so things could change if it goes in favour of Racing Point. Something to keep an eye on.

STATEMENT: @RenaultF1Team acknowledges the protest lodged by @RacingPointF1 concerning its brake bias system following the #JapaneseGP.
Team representatives have met with the Stewards of the Event at Suzuka, but due to the complexity of the 12-page dossier…
[1/2]

I can go on and on about Haas but they have been in a difficult position for a long time now and are focussing on next year more than they do on this year. Who disappointed in Japan were both Alfa Romeo drivers in my opinion. They were invisible all weekend and ended up with Kimi Raikkonen in 14th and Antonio Giovinazzi in 16th. They have a strong Ferrari engine but there was no spirit, no progress and therefore no points.

Time to regroup and come back stronger in Mexico. #JapaneseGP pic.twitter.com/71uVyzT1aW

Anything else worth mentioning?

What springs to mind is what Robert Kubica mentioned this weekend about how he isn’t getting the upgraded frontwing and that reserve parts for the car are almost non-existing. I know Williams isn’t in the best financial shape but to me it sounds as if Williams is holding on by a thread to stay in F1 and are trying to survive 2019 with the minimal amount of spare parts, just so they can shift focus on 2020 and, as George Russell mentioned, be better prepared when pre-season testing starts.

Hopefully, the Williams team can get their act together soon and work out their problems with this car because since 2014, they have been going downhill each year and that’s a real shame for a once championship-winning team.

A challenging day at Suzuka.

Robert Kubica feels let down by Williams due to some of their decisions in #JapaneseGP. The team did not use the new front wing which they will continue to evaluate in #MexicoGP too: https://t.co/PY07MUGWJI #F1 pic.twitter.com/umfFfl3Tp8

What stood out on social media?

The JapaneseGP weekend was a weekend in which a typhoon called Hagibis played havoc with the timetable and all involved in the circus we call Formula 1. Personally, I had a follower/friend that travelled to Japan and kept me posted on what was happening. He visited the WEC 6 hours of Fuji before heading out to Suzuka for the F1 weekend.

Although he shared tweets and videos in Dutch, his feedback was awesome and fans loved the insight he gave us, being a fan at a F1 weekend, including a typhoon. So a personal thanks goes out to Rob Bruijgoms, better known as @BUSHOK on Twitter.

Next up it’s the Mexican GP and I wonder if this will turn out to be another year in which Max Verstappen wins the race but Lewis Hamilton takes the championship. If you can’t wait that long, there is MotoGP from Motegi, Japan this weekend. More on this on the MsportXtra website.

The #motorsport season is slowly coming to an end. Next up it’s just @MotoGP from @motegi_english . Timetable and more on https://t.co/PTXuV86Ylx #MsportXtra #Moto3 #Moto2 #MotoGP pic.twitter.com/PiQk6svd2c