Day After: Six and Counting 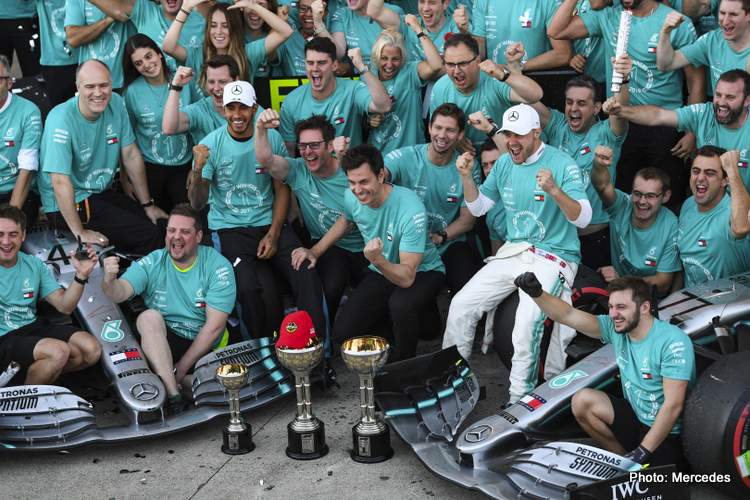 Courtesy of another stumble from Ferrari, Mercedes went from second-best in the morning to world champions in the afternoon at Suzuka on Sunday.

As far as the ways Mercedes could’ve won the 2019 constructor’s title, well… they don’t get much more fitting than that.

In a season that has continually seen Ferrari raise expectations only to disappoint while the Silver Arrows took the spoils, Sunday provided the perfect microcosm of the 2019 F1 season.

At just past 11 o’clock local time, it looked for all the world like the Scuderia were the team to beat. They’d locked-out the front row in qualifying, the SF90 being clearly the best car on the grid. Three hours later, the time came to get the result, and they couldn’t deliver.

Just as they had so many times this season, they found a way to screw it all up, this time courtesy of twin driver errors, first with Sebastian Vettel’s “whoops-I-jumped-the-start-maybe-if-I-stop-again-they-won’t-notice” blunder, and then with Charles Leclerc running into the side of Max Verstappen. The whole back-and-forth with the race director over Leclerc’s degrading front wing was only icing on the cake.

And yes, I know driver mistakes are part-and-parcel of the sport, but you simply can’t keep making them against a team like Mercedes. I mean, you could make a case Valtteri Bottas’ is their weakest link, and as we saw on Sunday, he’s more than capable of taking full advantage.

In any case, congratulations to Mercedes. Six championships on the trot is a record that may never be beaten – unless, of course, they do it themselves next year. Indeed, given what we’ve seen from both them and their closest rivals, who would bet against it?

Championship aside, what a strange race that was for Mercedes and Lewis Hamilton. Stuck on a one-stop strategy he didn’t like (what else is new), the team opted to pit him just when it seemed to be coming good. As we saw in his attempts to pass Vettel afterwards, it was no guarantee Bottas would get by him, but guaranteed a win either way, maybe this was the team doing the Finn a favour for all his service?

On a more positive note for Ferrari, that car is beyond quick these days. Consider that for the second time in three races, they rendered Friday practice completely meaningless, transforming from also-rans to dominant come quali. If only they could keep it together in races.

I like a new graphic as much as the next bloke, but that “tyre life percentage” one needs work. I don’t think Hamilton had just 10% left in his right rear when he was attacking Vettel at the end there…

From 16th on the grid to 6th after Charles Leclerc’s penalty, the inimitable aussie was, in his own words, “shiftin gears [and] passin peers” all day long. I might have to change this if he’s disqualified, though.

Leclerc, for his incident with Max Verstappen at the second corner that effectively gave Mercedes the title. Masi, for letting Ferrari dither over pitting him as bits of bodywork continued to fly off his car, with Lewis Hamilton’s wing mirror fortunately the only casualty.

“Quite a few people say that normally I don’t perform in the second half of the season… so for them I can say ‘f**k you'” – Valtteri Bottas, in his post-race interview with Sky. Foul-mouthed Bottas is best Bottas.