Verstappen: What more should Leclerc do to get a penalty? 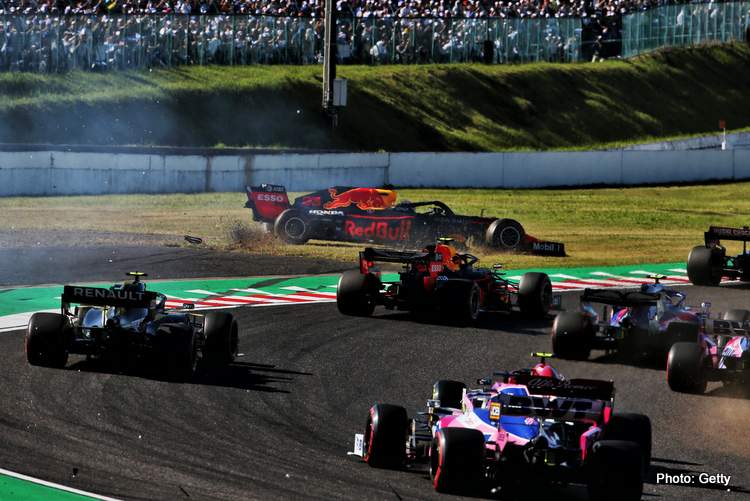 Much was expected from Max Verstappen at the Japanese Grand Prix but, the Red Bull driver driving at Honda’s home race, was out of the race at Suzuka on the opening lap.

The Dutchman made a good start and found himself battling for third place through Turn 1, then opted to run on the outside of Turn 2, with the Ferrari of Charles Leclerc on his inside.

The red car understeered as it exited the corner too hot, and slapped into the side of Red Bull, tipping it into a spin, day ruined for both drivers who might have been n the podium.

Over the radio, when told Leclerc was spared a penalty Verstappen could not contain his anger, “What? Where should I go? [Expletives] He just came straight for my car!”

The Red Bull driver continued until lap 15 when the team decided to park the car and retire it from the race.

Shortly after, he told reporters, “We had a really good start for once, that was positive, and then I just stayed on the outside. I felt I was in third but then suddenly into Turn 2 Charles just drove into the side of my car.

“From my side I don’t think I could have done anything. We all know that you lose downforce behind the car so that is not an excuse, I think he’s experienced enough to know that.”

“I mean my whole car is destroyed, the whole side, just holes in the side of the car. Then they start to investigate it but now it’s after the race. What more should he do to get a penalty?

“I like hard racing but I don’t think this was hard racing. This was just irresponsible driving into Turn 2. They [Ferrari] had a bad start so for sure he was trying to recover places but there’s only as much as you can do and it’s still a very long race. It’s a shame that it happened.”

Pole-sitter Sebastian Vettel fluffed his lines and was swallowed up by the pack thus, starting from fifth on the grid, Verstappen found himself in third as they powered through the first turns.

Verstappen said of the start, “Just watching the footage back from Seb’s start, he moves, he stops, and the rule says you cannot move. That’s’ fine because he didn’t gain an advantage they said. I really don’t understand what’s going on today with the rules.”

At first, the FIA F1 race stewards deemed it to be a racing incident but later confirmed the drivers would be summoned after the race to answer for their actions. We await the outcome.

Big Question: Was it a penalty?

The collision between Verstappen and Leclerc is now under investigation by race stewards#JapaneseGP 🇯🇵 #F1 pic.twitter.com/Vebw6blQOn