Mercedes: We dedicate it to Niki 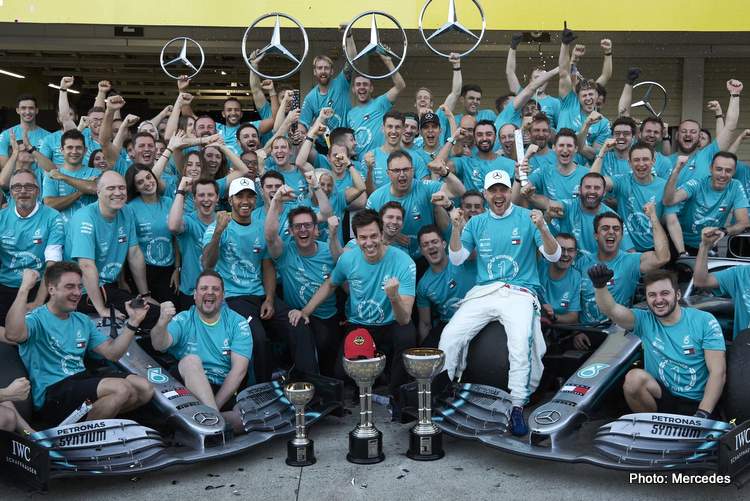 Newly crowned constructors’ champions Mercedes report from the Japanese Grand Prix, Round 17 of the 2019 Formula 1 World Championship, at Suzuka Circuit.

Valtteri Bottas: “Six double championships – every single team member at the race track and in the factories can be incredibly proud of this achievement!

“A big thank you to all of you. I think we don’t quite realise yet what an amazing achievement this is, but we’re making history in this sport. We’ve had a really good season so far and managed to make the most of our opportunities, especially in the beginning of the season.

“It’s amazing to think that we’ve just done something that’s never been done before – what a great day for all of us! I had an excellent start today, one of the best ones in my career, and managed to take the lead in the very beginning.

“We expected our car to be quick in the race, but it’s really tricky to overtake on this track, so we knew that we’d have to try and take the lead at the start and I’m very glad it all worked out. I really enjoyed the race afterwards; the car felt really good and our upgrades worked well.

“Suzuka has always been my favourite track even though I’ve never been particularly strong here – but now I like this track even more. It’s been a while since my last victory, I missed that winning feeling and I’m very happy and proud to have won the race that secured us the Constructors’ Championship.

Lewis Hamilton: “I’m so happy for the team – what a great result! Six consecutive double titles is an amazing achievement that has taken a long time and a lot of hard work.”

“It just shows the strength and depth through and through for the team and I’m incredibly proud to be a part of Mercedes history. It’s a well-deserved achievement – thank you to everyone in Brackley, Brixworth and Stuttgart for all the hard work and dedication.

“Valtteri did a great job today and deserved the win, congratulations to him. I did everything I could today; I think we probably had the chance at a 1-2 today, so we’ll take a look at what we could have done better in the debrief.

“I think we can expect the next races to be very challenging; Ferrari still have a straight-line speed advantage which makes it very hard to qualify ahead of them, so we have to outrace them, but I think that makes it really exciting for the spectators.

“We will celebrate this monumental achievement today; but tomorrow we’ll start pushing again – we still have races to win.”

Toto Wolff: “When we embarked on the journey six or seven years ago we wanted to win races more regularly and then fight for a Championship – and now, six years later, we win our sixth Championship in a row. We never thought this would be possible and I’m incredibly happy for everybody who has been a part of this journey.

“It’s not always been easy, the entire team put in a lot of hard work and we had our fair share of painful moments, but we were always able to pick ourselves up. Everyone in Brackley and Brixworth worked incredibly hard for this achievement and I can’t thank them enough.

“We also could not have done this without the continued support from Daimler and Petronas who have always been by our side. This sixth Championship is a very special one – and we dedicate it to Niki. He has been such an important part from the beginning, and we all miss him dearly.

“I think about him every day and still find it hard to believe that he’s not here anymore; I keep thinking to myself: What would Niki say, what would he think? Today, he probably would have said: Congratulations for the sixth one, but you have a challenge on your hands for next year.

“It was his way of making sure that we’re never complacent. Today has been an emotional rollercoaster; we were disappointed in the morning because we weren’t quick enough in qualifying. And now we’ve won the race and also both Championships – which is still hard to fully grasp.”

Andrew Shovlin: “A big well done to the whole team, everyone in Brackley and Brixworth, on winning a sixth double-championship in a row. It is an amazing achievement and it will take a while to sink in.

“It’s been really quite an amazing day with both qualifying and the race in one day. We were a bit disappointed after qualifying; before the session, we thought that we could challenge for pole, but ultimately the gap was too big and there was no way the drivers were going to make that up.

“We saw on Friday we had good tyre degradation and our efforts focused straight away on trying to make the most of the race. Our car was very strong and both drivers were really happy with it, but we also got a bit of help at the start.

“Our race pace was very encouraging today, but we need to look at how we can improve from our qualifying pace because it’s not good enough at the moment. It’s a shame that we couldn’t get Lewis in front of Vettel at the end of the race; we’ll take a look at it to see what we could have done differently. There are lots of things that we’ll take from this race to try to improve.

Markus Schäfer, Member of the Board of Management of Daimler AG, Group Research & Mercedes-Benz Cars Development: “To win six consecutive constructors’ championships is something that has only been achieved once in F1 history – and it puts our team in the strongest possible position to take a sixth consecutive double, which would set a new benchmark in the sport.

“For everybody at Daimler, this achievement is not just a source of great pride, it is also a demonstration of our company’s capability to succeed when tackling the biggest challenges. To win in Formula One requires the right blend of cutting-edge technology and exceptional team spirit to achieve demanding goals; the lessons we learn from this success are important ingredients in our ability to achieve the same in our wider business.”