Haas: It is pretty frustrating but not unexpected 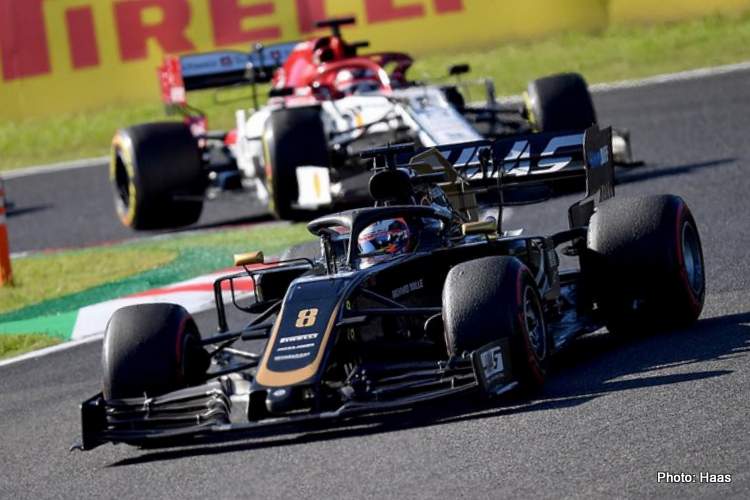 For only the fifth time in Formula One history, qualifying was held on race day as all Saturday track activity was suspended due to the landfall of powerful Typhoon Hagibis. Grosjean had a strong qualifying performance, advancing to Q3 and earning the 10th position on the starting grid.

Magnussen’s fortunes were quite different, however, as an accident during the Q1 session prevented him from recording a qualifying time. The Haas F1 Team worked quickly to repair his car in time for the race less than three hours later, which he started from the 19th position.

Grosjean started the 52-lap race around the 5.807-mile (3.608-mile), 18-turn circuit on a set of Pirelli P Zero Red soft tires used during his Q2 qualifying effort but dropped from 10th to 14th during the opening-lap mayhem. Magnussen, starting on a new set of Yellow medium tires, had a solid start, moving from 19th to 13th on the first tour of the circuit.

Both Haas F1 drivers switched to White hard rubber during their first stops, Grosjean pitting from 16th on lap 17 and resuming in 17th, and Magnussen stopping on lap 18 from 13th and resuming in 18th.

The hard tires enabled both Grosjean and Magnussen to hold their relative ground over the next 20 laps, Grosjean advancing as high as 12th on lap 30, but then dropping three positions before the checkered flag.

Magnussen was as high as 15th on lap 30 before also losing ground. He pitted from 17th on lap 49 to swap his hard tires for a set of softs for the final four laps and crossed the finish line in the same position.

It was the sixth career win for Bottas, his third of the season and his first at Suzuka. The victory and accompanying point for fastest race lap by Hamilton clinched the constructors’ championship for Mercedes.

Only four races remain on the 2019 FIA Formula One World Championship calendar, the next event being the Mexican Grand Prix Oct. 27 at the Autodromo Hermanos Rodriguez in Mexico City.

“Well, it wasn’t as good as we wanted. The start was terrible, I don’t know why. I was behind Kevin (Magnussen) by turn one, so that shows how bad it was. From there it was very difficult to recover. We tried to push hard, we fitted the hard tire to do a one-stop race.

“Honestly, I had two really good overtakes on Russell and Giovinazzi around the outside of turn one and two – both times. That was the highlight of my race. After that it was just managing tires. We just didn’t have the pace in the race, which was a bit of a shame. We’ll keep working and see if the next race will be good for us.”

“I started last and got up to P12, which I was fairly happy about, but after that it went south. It wasn’t terrible in terms of tires and pace, not like previous races at least. If we’d hooked everything up, and if I’d started where I should have, and made as good a start as I did, then I’d obviously have been in a much better position. We just didn’t have the pace today.”

Guenther Steiner, Team Principal: “This morning qualifying for Romain wasn’t so bad, he got into Q3 which was a little bit the highlight of the day. Kevin crashed on his fast lap, he was doing a very fast lap – the car can do one good lap performance-wise. As soon as we go racing though, we fall out of the tire window and we end up like we did today.

“It is pretty frustrating but not unexpected, it’s not like we were surprised. Still it’s never nice that it happens. We just need to try to do our best for the rest of the season to get a little bit out of the car, and mainly learn not to do the same mistakes for next year.”