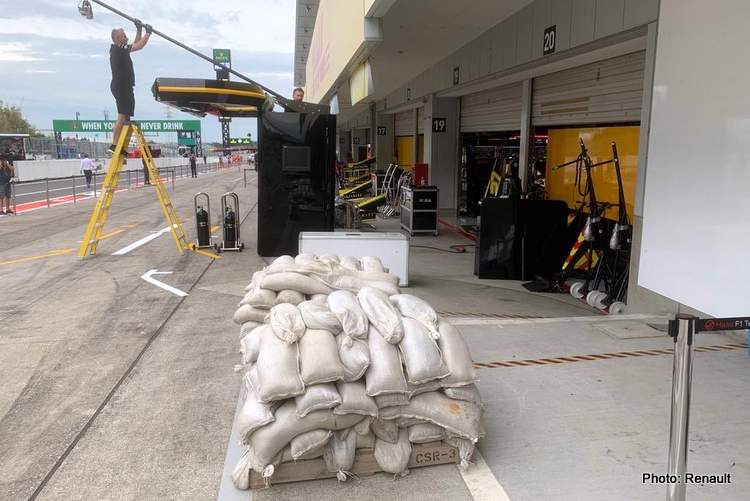 Saturday’s Japanese Grand Prix weekend action as been cancelled, as the risk that a ‘violent’ typhoon will hit the local area rises to 100 per cent which means qualifying will shift to Sunday morning weather permitting

If that is also affected, then the grid for the race at Suzuka will be determined on the order of second Friday practice.

Formula 1 released the following statement on Friday morning: As a result of the predicted impact of Typhoon Hagibis on the 2019 Japanese Grand Prix, Mobilityland and the Japanese Automobile Federation (JAF) have decided to cancel all activities scheduled to take place on Saturday, 12 October.

“The FIA and Formula 1 support this decision in the interest of safety for the spectators, competitors and everyone at the Suzuka Circuit.”

Ferrari driver Sebastian Vettel backed the move, “The most important thing is safety. Not just for us but also the fans.

“It would have made no sense to stand around in the garages waiting for the light to turn green while the fans are waiting outside in horrible wind and sideways rain,” added the five-time F1 World Champion.

Lewis Hamilton is relishing the prospect of the different format the rain-affected race weekend will take, “I am happy for them to do that. It is cool when the format changes. You have to enter into two different mindsets and two different rhythms.

“It is a different challenge so I like that. It is intense here when it rains, but I love driving in the wet. It doesn’t make a difference to me. It is quite exciting.”

“They are doing the utmost they can. I am sure they are preparing, are aware that it is coming, and have procedures in place,” added the championship leader.

“I think it´s pretty clear if the typhoon is going to come here there´s no way we can drive,” said Ferrari´s Charles Leclerc, whose godfather Jules Bianchi suffered ultimately fatal head injuries in a crash at the 2014 Japanese race after rain from the approaching Typhoon Phanfone drenched the track.

“But in my previous experience… they´ve always been quite safe with the conditions. They´ve always asked what we thought about the track once we´re in the car. So, yeah, happy. We’ll see,” added the 21-year-old Monegasque.

Max Verstappen is taking the situation in his stride, the Red Bull driver told reporters, “I’m not worried about doing the qualifying and the race on Sunday as it won’t affect my approach. We can’t change the weather and it’s out of our control so now we just have to see what happens.”

Toro Rosso’s Pierre Gasly added, “They say the wind can reach 150kph, and that does not sound safe for the people coming to the track. It’s not an easy decision, but the sooner there is a decision the better it is for everybody.”

Renault team boss Cyril Abiteboul applauded the decision, “It was a good, common-sense decision to postpone qualifying until Sunday. With the predicted path of the typhoon, it would not be wise to have cars on track nor spectators in the grandstands. Cancelling qualifying well in advance allows us to plan correctly and take the appropriate action for team personnel and fans alike.”

Racing Point’s Otmar Szafnauer said, “It’s a case of wait and see what happens when the typhoon hits and how long it takes to clear us. I’m hopeful that we can still have the race on Sunday, but obviously the safety of the fans and everybody involved in the sport will take priority.”

Mercedes engineer Andrew Shovlin said in his practice day review, “We hope everyone stays safe tomorrow and that the circuit survives the storm so we can put on a good show for the fans on Sunday.”

Alfa Romeo summed up in their day-end report, “As for Saturday, we’ll hunker down and take cover as nature unleashes its power over Suzuka, hoping everyone keeps safe. Once the rain stops and the skies clear, we’ll get back to take care of unfinished business. Sometimes, even the seemingly immutable schedule of a race weekend needs to yield to Mother Nature.”

With the typhoon looming over the circuit, teams are preparing to keep their garages secure with sandbags and similar precautions to cope with the torrential rain and winds that are expected to batter the area on Saturday.

Everything outside has to come inside! #JapaneseGP 🇯🇵 pic.twitter.com/TTXPu0iTNX 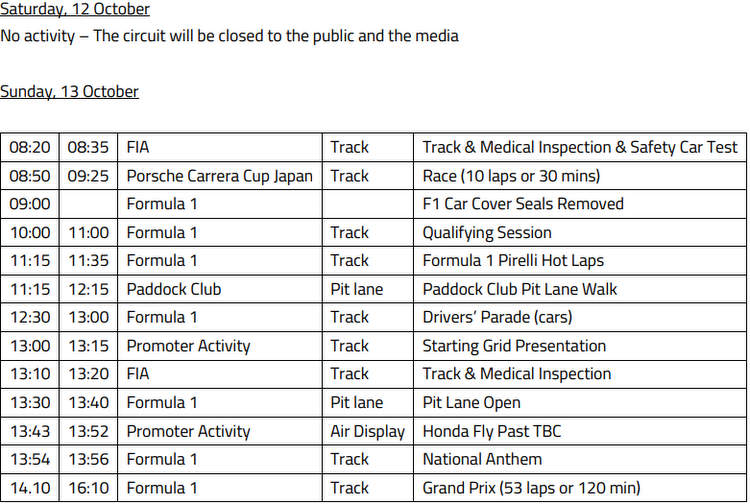