McLaren: The car behaved well both on low fuel and high fuel 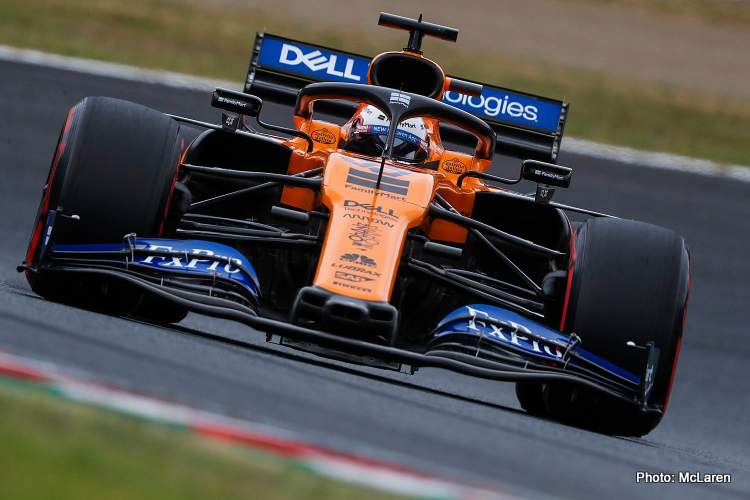 McLaren report from the first day of free practice of the Japanese Grand Prix weekend, Round 17 of the 2019 Formula 1 World Championship, at Suzuka Circuit.

“I think it’s been a positive Friday – after a little heart attack at the start of FP1! We managed to get the car back to the garage, the mechanics did a great job to get everything ready and we went back out to complete our run programme. FP2 was also intense but I’m happy with how both sessions went. The car feels good and we looked competitive.

“However, not running tomorrow means there were different run plans today, so we can’t tell for sure where our competitors are. There is a bit of uncertainty but I’m confident we’ll be ready for Sunday.”

“A good day. Everything we planned to do, we got through. We did the testing we needed to accomplish: high-fuel, low-fuel and got good readings and data from everything we did.

“I’ve only previously done FP1 here last year, so in terms of driving, I’ve got a bit to work on. I’m not quite as confident as I would want to be, so we’ll make some changes before Sunday for qualifying – if it happens. By improving my driving and the set-up, we can take a step forward.”

Andrea Stella, Performance Director: “We’ve had a decent day. Carlos had an electrical issue which delayed his running in FP1, but otherwise everything went smoothly. The car behaved well both on low fuel and high fuel.

“It was, of course, an unusual day in that we had extra sets of tyres available from those that we usually allocate to FP3, and we also had to take into account that FP2’s times might count for grid positions.

“That meant there was a bit of racing mixed in with the usual Friday activities, which we enjoyed. Sunday is going to be another interesting day with qualifying and the race – we’re looking forward to it.”